For firms that obtained funding via unorthodox methods, conditions may become particularly challenging. One of those practices is known as structured issuance, where a company will transfer cash to an asset manager to buy a slice of the bonds the company is itself selling. The manoeuvre helps give the appearance of greater demand for its securities and stronger ability to obtain funding. What could make the practice untenable is if asset managers can no longer use those securities held in custody as collateral for repos.

“Since some repo transactions have defaulted recently, it is unclear whether companies can continue to borrow money from the structured issuance method, said Meng Xiangjuan, chief fixed-income analyst at SWS Research Co. in Shanghai. “If it stops, some issuers will certainly face difficulties operating their business normally, and their debt-repayment pressure will rise,” she said.

The main headline today was the fact some Chinese banks have been breaking the sanction prohibitions on North Korea. However, the fact it is possible for companies topartially fund their own bond issuance by promising to buy it themselves with the funds received is garnering a lot less interest.

Governance of the financial sector in China is focused on ensuring the large state-owned companies are well capitalised. Outside of that, smaller companies run rough shod over financial norms, with the result an increasing number of issuers are either defaulting or need to be supported by their guarantors.

The trade war represents a drag on the Chinese economy which highlights the fact that growth over the last decade has been dependent on expansion of the debt market. Usually refinancing is one of the biggest hurdles for issuers, but when they fail to even make coupon payments it is suggestive of a company that is under severe duress.

Since China first allowed defaults, the pace has been trending higher at an alarming rate and there is no way of knowing where the terminal point of the trend is, particularly considering the scale of malinvestment. 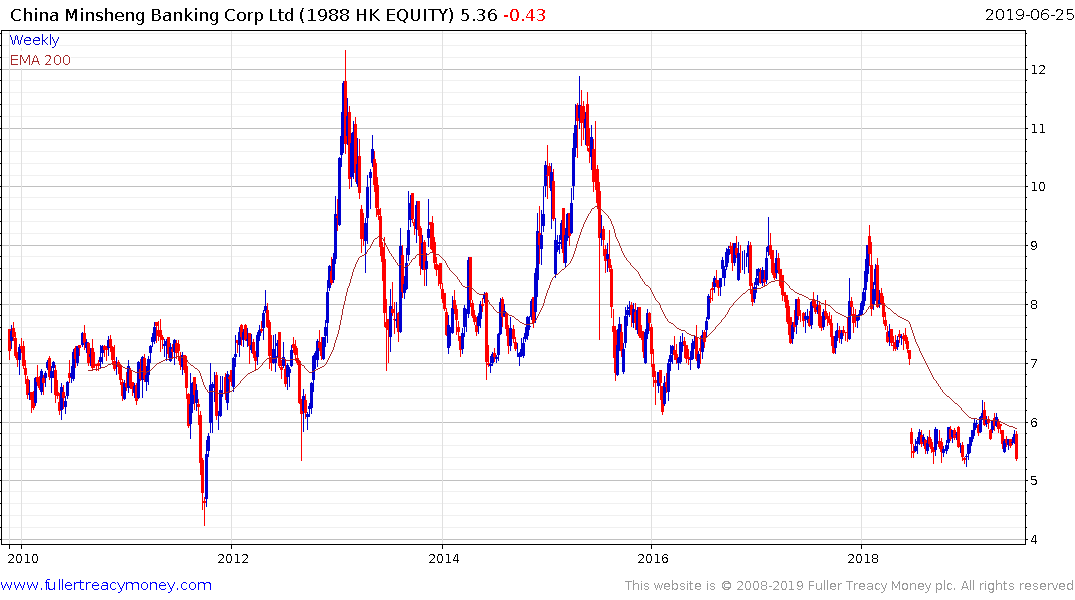 China Minsheng bank is trading on a price/book of 0.49 but dropped today to test the lower side of its range. The share has bounced from the HK$5 area on multiple occasions since 2013. A break below that level would likely signal an intensification of stress in the regional banking sector.