The order deluge meant Austria joined the likes of Spain and Italy in setting demand records this month as investors chase the safety of bonds. Fears that the spread of the coronavirus will derail an economic recovery have sent yields tumbling, fueling a huge jump in the world’s stockpile of
negative-yielding bonds.

Austria’s Treasury ended up placing 3 billion euros of the 10-year bonds Wednesday with a yield of minus 0.111%. For investors, that’s still more appealing than equivalent German debt trading at around minus 0.40%. The European Central Bank has a minus 0.50% deposit facility rate.

“Despite the negative interest rate, the issue was met with very strong demand and the transaction was 10-times oversubscribed,” Markus Stix, managing director of Austria’s Treasury, said in a statement.

The total of negative yielding debt continues to rebound, led by a surge in demand for Eurozone sovereign bonds. The total now sits above $13 trillion and has clearly broken the downtrend evident since August. 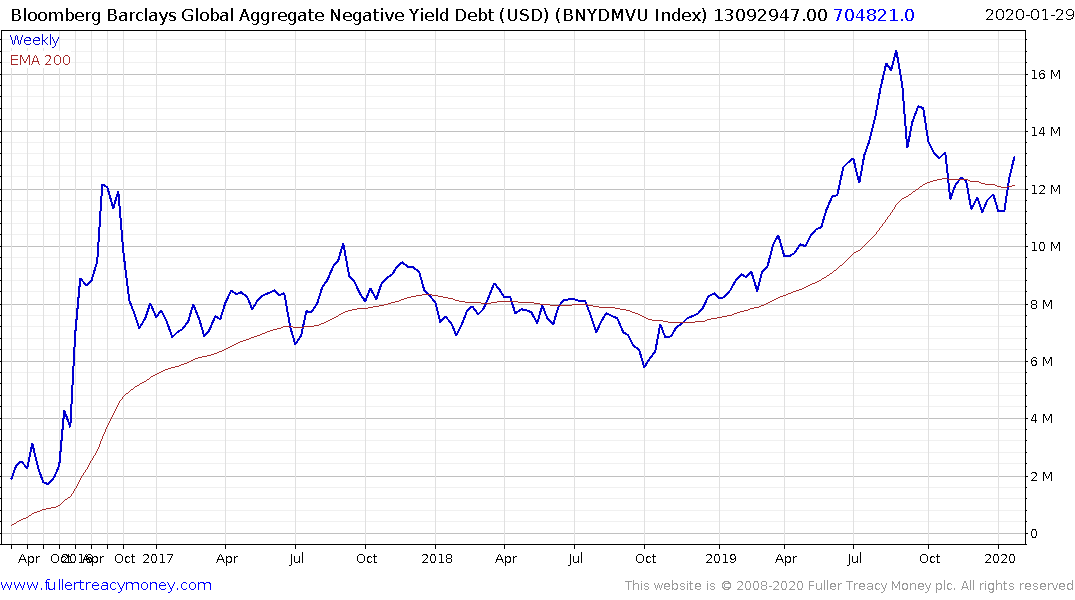 The total peaked in September because investors were willing to believe the Fed in particular was willing to pre-empt a recession by easing before a contraction was clearly evident. Jay Powell’s verbiage yesterday suggested a willingness to do whatever it takes to avoid a contraction. 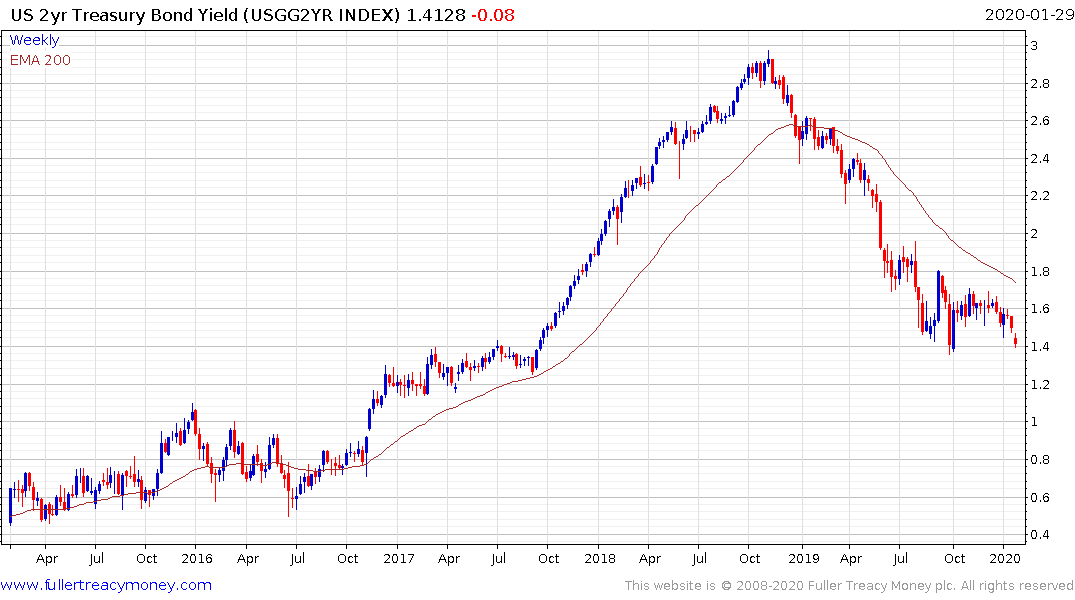 The bond market has already priced in another rate cut with 2-year yields hitting a new intraday low. Some clear evidence of continued balance sheet expansion will probably be required by investors to adopt a risk-on attitude again. 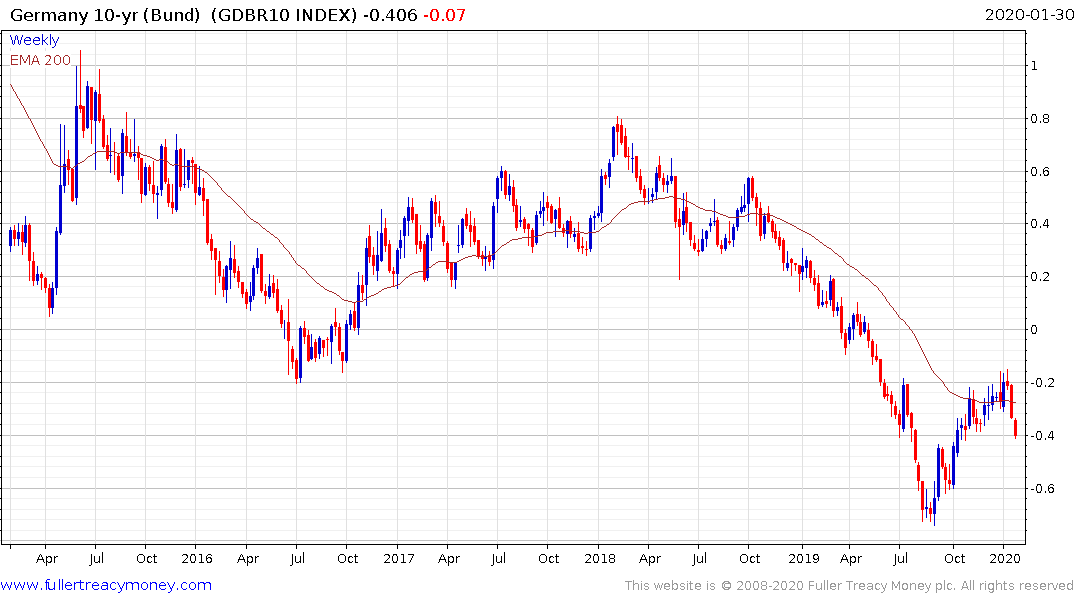 German Bund yields dropped back below the trend mean today, suggesting additional scope for a near-term rally and potentially a resumption of the medium-term downtrend. 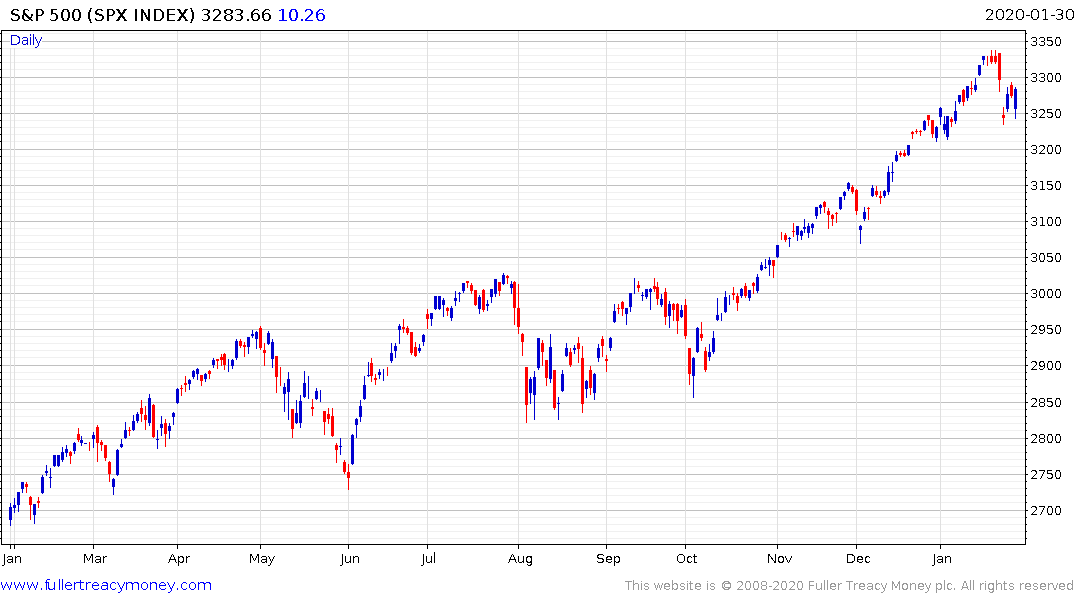 Wall Street’s reaction has so far been limited to a mild pullback, similar in size to that posted in early December, and firmed following the WHO’s announcement that a trade and travel embargo is not necessary. We’ll find out in coming weeks whether that turns out to be a fateful decision.