Tesla's Surprise $6,410 Price Cut Sparks a Rant From One Devotee
Comment of the Day

Tesla's Surprise $6,410 Price Cut Sparks a Rant From One Devotee by Eoin Treacy

Musk has fielded many complaints personally -- and publicly -- on Twitter. Much like Tesla has wavered with its pricing, he’s oscillated from adamant, to apologetic, to apathetic, to argumentative. And for the chief executive officer of a company that’s sought to revolutionize car-buying, he’s offered up a perhaps unlikely excuse: Hey, other automakers are doing this, too.

The automotive sector has not been this interesting in a century. There are multiple arguments for which view of the future will prevail. There are competing technologies and perhaps most important there are competing business models. Tesla hasn’t quite figured out what its business model is just yet and that is because autonomous driving, when it finally happens, will change everything.

Tesla is selling “fully autonomous” features for an additional $6000 in new cars and promises potential for autonomous city driving by the end of the year. The company has a history of missing deadlines and this forecast seems ambitious. The first company to come up with a working autonomous vehicle is going to have a significant first mover advantage.  The estimates for when this will be realisable range from months to decades. What is almost certain is the first certification of an autonomous vehicle will be catalytic for the global economy.

The more urgent question today is whether a car is a tool or a piece of technology. We are accustomed to tools fulfilling a purpose and degrading over time. With technology we expect both enhancements to be forthcoming and costs to decrease over time as innovation, scale and competition take their toll. The $30,000 sticker on a Tesla Model 3 means you end with a lot more car for your money than from other companies, although the Chevrolet Volt is also a sedan and comes in at $25,533. Anyone looking for a rationale for why Tesla just cut prices should probably pay attention to the competition. 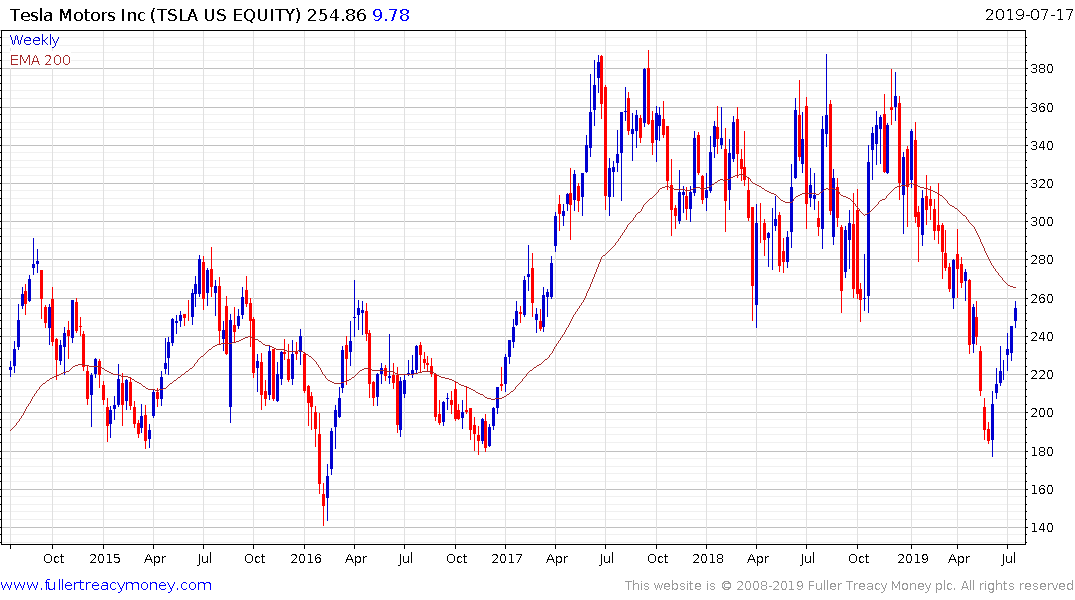 The share is currently rallying to unwind an oversold condition relative to the trend mean. With today’s move it has broken the progression of lower rally highs over the last seven months. A higher reaction low is required to signal demand coming back at a higher level than the June low. That would confirm more than short-term steadying.