Email of the day on the size and duration of bear markets.
Comment of the Day

Email of the day on the size and duration of bear markets. by Eoin Treacy

Hi - in light of recent stock market rise I checked how past 2 bear markets behaved and found the following:

Than you for this informative email which raises an important question about whether we are in medium-term correction within a broader secular bull market or is this a major market top which denotes the end of the secular bull market?

The peak in 2000 was the end of a 20-year secular bull market and represented the climax of a liquidity fuelled mania in the technology, media and telecoms sectors. The 2007 peak occurred within the context of a secular bear market which we defined a generational long process of contracting valuations and rising dividend yields.

Wall Street has been rallying in blue sky territory for seven years so this has not been a rally within a secular bear. Therefore, the only analogue should be either the 2000 pinnacle of a secular bull, or the 1987 crash which as a “grand correction” but ultimately was nothing more than a place marker within a larger secular bull market.

The relative strength of the mega-cap shares which have been the leaders in this entire bull market is a supporting piece of evidence for the most bullish conclusion. A secular bull market ends with the collapse of the leaders and the utter disillusionment of the retail sector with investing. There is no doubt small and mid-caps have pulled back a lot more, and not least because they are more heavily reliant on the “real” economy. Meanwhile the success stories of the last decade are only extending their lead as consumers are forced online and have to adopt cloud services. 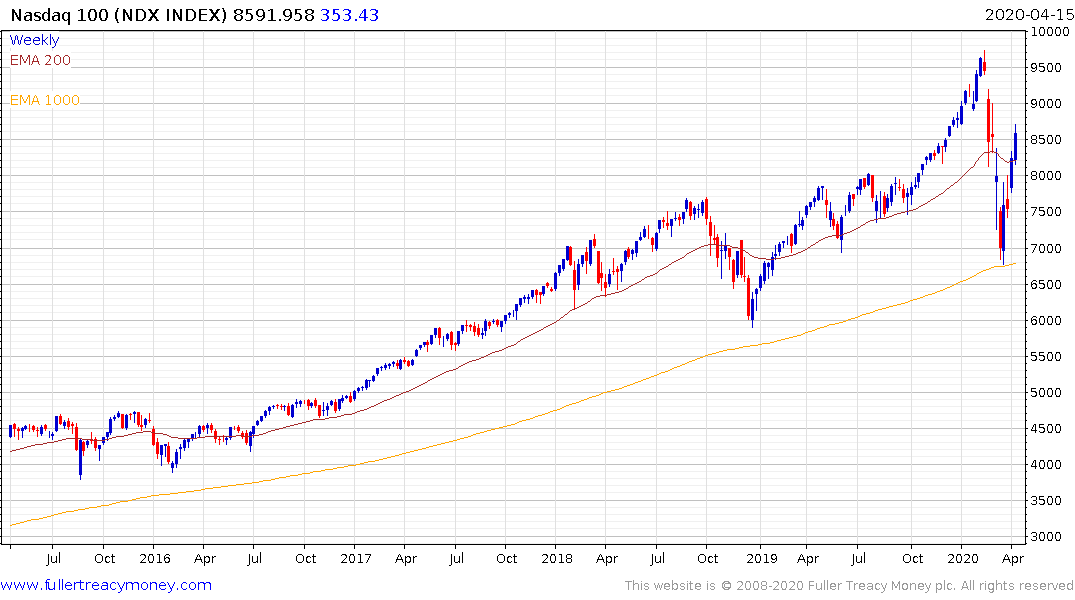 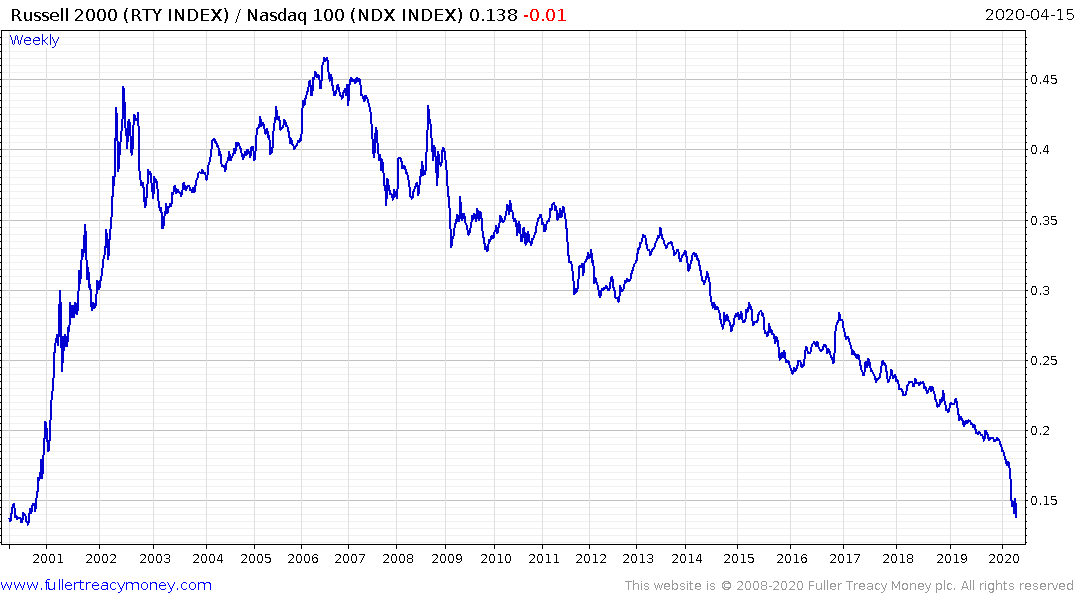 The Russell 2000 has been trending lower against the Nasdaq-100 since 2006 and the pace of the underperformance has accelerated of late. There is no sign yet of this trend reversing. 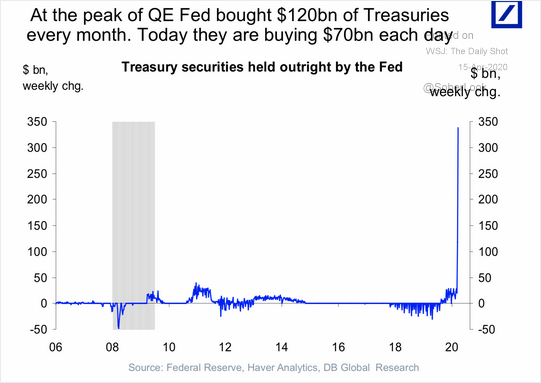 Meanwhile the governments and central banks of the world are throwing everything at this problem. Trillions of units of currency have been printed in the last month. The Federal Reserve alone is buying $70 billion in Treasuries a day! The compares with $120 billion a month during the peak of other QE programs.

The quantities of money being thrown at this problem are epic in scale and do have the potential to boost asset prices. The fact the IMF downgraded growth for this year in yesterday’s briefing was headline grabbing but the 5.8% global growth prediction for 2021 was much less remarked upon.

If we had to bet on one asset to follow the path of the markets in 2008, it is the purchasing power of fiat currencies.

We have seen a truly massive reaction against the prevailing trend and an equally impressive rebound. That short covering rally will eventually roll over into a consolidation. That could happen soon considering the fact the overextension relative to the 200-day MA has been almost completely unwound.

If this is still a secular bull market the March low will hold and ideally support will be found well above that low. The Nasdaq-100 is above its 200-day MA. The S&P500 needs to do the same. 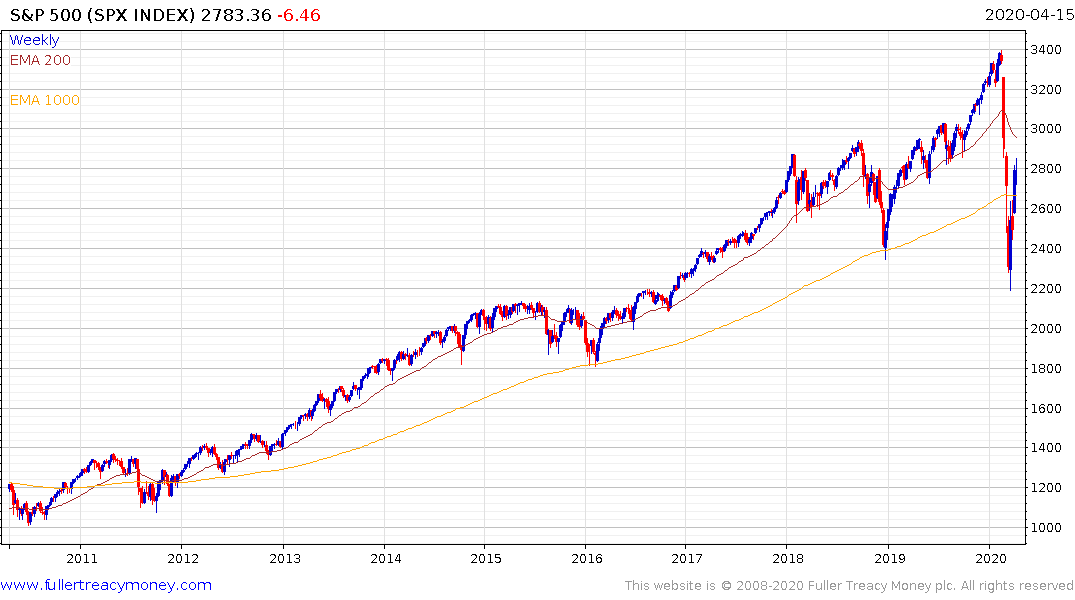 In the last 40 years this is the first time the S&P500 has dropped below the 1000-day MA during a secular bull market. The move held for about three weeks and then bounced. That low absolutely needs to hold.

If the 200-day MA falls through the 1000-day MA, that is about the clearest confirmatory evidence we are in a secular bear market. Where a consolidation forms, how much of the rebound it holds and how well the S&P500 can sustain move back above the 200-day MA will all be important points to watch.

In conclusion, this is worse than the 1987 crash because the wider economy has been affected but the support measures deployed are also much larger. If the economy starts to open up again over the coming couple of months, the stock market is likely to hold its gains and comparisons with the 1987 crash will likely grow. If the news gets worse and the economy goes into a length hiatus, which I view as the less likely scenario, then we will see a bigger correction.