Is That All There Is? A Fresh Look At U.S. Gas/LNG Export Potential
Comment of the Day

Is That All There Is? A Fresh Look At U.S. Gas/LNG Export Potential by Eoin Treacy

Exports of U.S.-sourced natural gas as liquefied natural gas (LNG) will likely begin within a year’s time, and will ramp up through the 2016-19 period. That much seems certain. What’s less clear is whether the capacity of U.S. liquefaction/export projects will plateau at the roughly 6 Bcf/d in the “First Four” projects now under construction or continue rising higher. Yesterday’s decision by the BG Group to delay its commitment to the 2 Bcf/d capacity of the Lake Charles LNG terminal until 2016 certainly casts doubts on those further expansions. Prospects for additional export projects hinge on a few interrelated factors, including the higher capital costs associated with some next-round projects; the costs and challenges of shipping LNG through the expanded Panama Canal; and the possibility of competing LNG export projects being developed elsewhere, including western Canada. Today we consider these factors and handicap the handful of export projects on the cusp of advancing.

Making a final investment decision (FID) on multibillion-dollar liquefaction and export projects is not for the faint of heart. Once that FID trigger is pulled, there’s really no turning back. But the decision to build a project is in many ways easier than the decision by a Japanese utility or global LNG trader to commit to 15 or 20 years of LNG purchases. After all, if (as has been the case with all U.S. liquefaction/export projects so far) the project’s economics are based largely on long-term take-or-pay liquefaction commitments, the developer is basically assured of recovering the costs of its investment (and making at least some profit) once it has the necessary Sales and Purchase Agreements (SPAs), even if the LNG buyer elects not to use all the liquefaction capacity it has lined up.

?An LNG buyer, on the other hand, is committing to pay up to $3.50/MMBTU for liquefaction capacity and—if, as is likely, it uses that capacity--115% of the Henry Hub price of natural gas for the gas that is liquefied. As a result, prospective LNG buyers need to be very sure that any SPA they enter into will work to their benefit over a wide range of possible scenarios, including the possibility (and current reality) of low oil prices that make once-onerous oil-indexed LNG contracts look not so bad anymore.  As we said in Episode 1, the first liquefaction “train” at Cheniere Energy’s Sabine Pass facility in southwestern Louisiana by early 2016 will be supercooling natural gas and loading LNG onto ships for export to Asia and other markets. Three more trains at Sabine Pass will start operating later in 2016 and in 2017, and soon thereafter the Cameron LNG, Freeport LNG and Cove Point LNG liquefaction/export facilities (a total of six more trains) will be up and running too. The LNG production capacity of what we call the First Four (four trains at Sabine Pass, three at Cameron, two at Freeport and one at Cove Point) totals 45 million tons per annum (MTPA)—enough to consume just over 6 Bcf/d of U.S.-sourced natural gas, or about one-twelfth of current U.S. gas production.

As a result of the fall in oil prices investment in energy infrastructure is on hold at best. The decline has upended the growth assumptions of major oil and gas companies with the result they will likely need to see evidence of bottoming before they commit to major expenditure once more.  For Asia the fall in energy prices is good news for some of the world’s largest importers i.e. China, Japan and India while it is a mixed blessing for countries such as Indonesia and Thailand.

For US companies that were looking forward to exporting cheap domestic natural gas onto the high priced Asia market, the fall in oil prices represents a significant obstacle. Asian supply of LNG is ramping up with Australian exports coming online while the price of gas is contractually tied to oil prices. 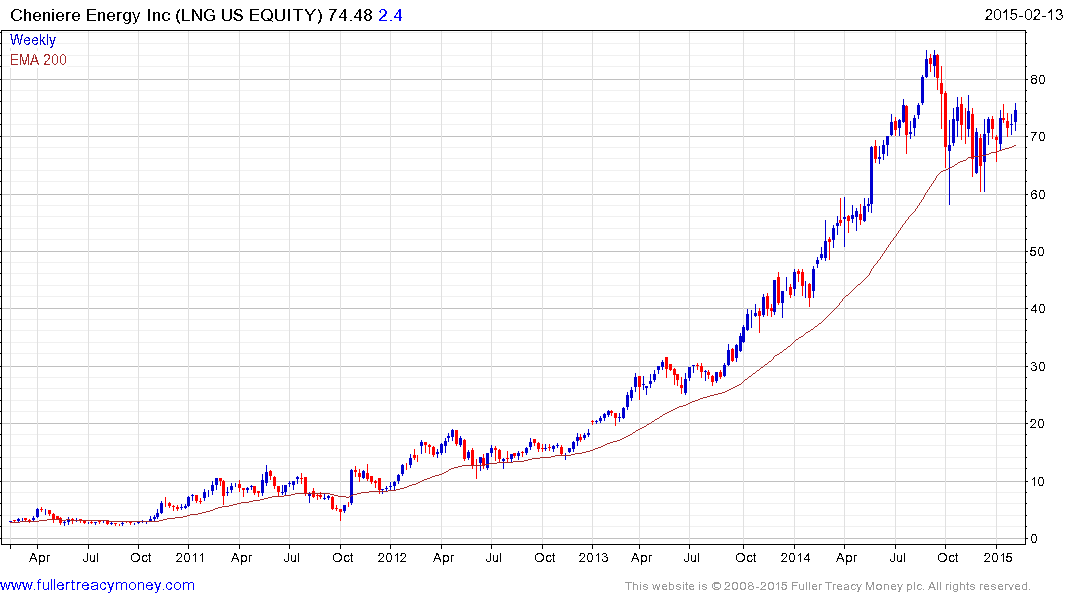 Cheniere Energy accelerated to its September peak near $85 and has been ranging below that level in a relatively gradual process of mean reversion since. As the first mover in what is likely to be a much less congested export sector than initially envisaged, Cheniere may be a beneficiary. However the prospects for early stage projects are likely to be much less benign.