What Is a Tech Company?
Comment of the Day

What Is a Tech Company? by Eoin Treacy

The question of whether companies are tech companies, then, depends on how much of their business is governed by software’s unique characteristics, and how much is limited by real world factors. Consider Netflix, a company that both competes with traditional television and movie companies yet is also considered a tech company:

There is no real software-created ecosystem.
Netflix shows are delivered at zero marginal costs without the need to pay distributors (although bandwidth bills are significant).
Netflix’s product improves over time.
Netflix is able to serve the entire world because of software, giving them far more leverage than much of their competition.
Netflix can transact with anyone with a self-serve model.

TV shows and movies are delivered at no additional marginal cost once produced. That is true but they do not have the same residual value as software because unless the show is particularly good the vast majority of people will never watch it again.

That represents a very significant ongoing capital requirement and how good a show or series is depends on writers, production crews and the luck of capturing the zeitgeist at the time of release. That last point does not model well.

The primary problem for Netflix is streaming is available to anyone with the resources to pay for bandwidth and plenty of content providers are just better at producing shows people want to watch.

The cable TV operators offered bundles. The cycle has now moved to unbundling but the future is likely re-bundling because of the cost of production. Access to ample liquidity will be the arbiter in when the change occurs. Not every unbundled service will survive that change. 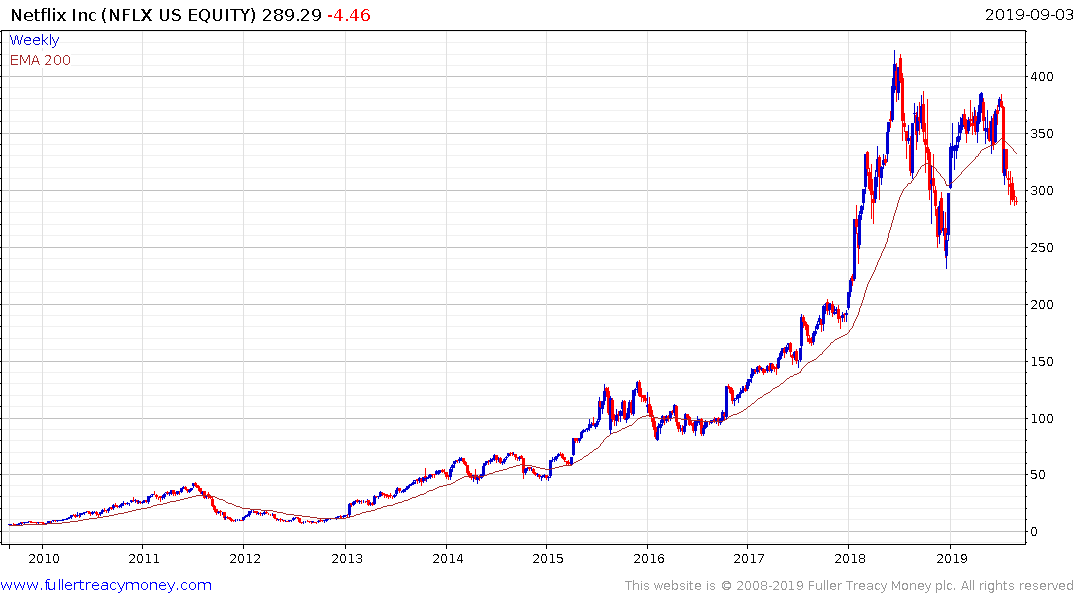 Netflix’ share continues to extend its downtrend but the bonds remains reasonably steady at a yield of about 2.5%. That disparity is unsustainable.