Understanding China's Rise Under Xi Jinping
Comment of the Day

However, militating against any of the above, and the “tipping points” which each could represent, is Xi Jinping’s seemingly absolute command of the security and intelligence apparatus of the Chinese Communist Party and the state. Xi Jinping loyalists have been placed in command of all sensitive positions across the security establishment. The People’s Armed Police have now been placed firmly under party control rather than under the control of the state. And then there is the new technological sophistication of the domestic security apparatus right across the country—an apparatus which now employs more people than the PLA.

We should never forget that the Chinese Communist Party is a revolutionary party which makes no bones about the fact that it obtained power through the barrel of a gun and will sustain power through the barrel of a gun if necessary. We should not have any dewy-eyed sentimentality about any of this. It’s a simple fact that this is what the Chinese system is like.

Many scholars failed to pay attention to the internal debates within the Party in the late 1990s, where internal consideration was indeed given to the long-term transformation of the Communist Party into a Western-style social democratic party as part of a more pluralist political system. The Chinese were mindful of what happened with the collapse of the Soviet Union. They also saw the political transformations that unfolded across Eastern and Central Europe. Study groups were commissioned. Intense discussions held. They even included certain trusted foreigners at the time. I remember participating in some of them myself. Just as I remember my Chinese colleagues telling me in 2001-2 that China had concluded this debate, there would be no systemic change, and China would continue to be a one-party state. It would certainly be a less authoritarian state than the sort of totalitarianism we had seen during the rule of Mao Zedong. But the revolutionary party would remain.

China is going to stay authoritarian and is in the process of implementing an internal security apparatus that is more sophisticated than anything the world has seen before. The nexus of artificial intelligence, cameras, local monitoring, real name social media enforcement, social scorecards are all designed to ensure the long-term sustainability of single party rule.

The reason I have been so emphatic that China deserves an additional risk premium over the last month is because profit is no longer the end goal of corporations under such a system. Their first loyalty is now to the party and whatever it requires. That is not problematic right now because this is the beginning of the process but it is almost certainly going to be problematic in future.

Today’s elevation of Liu He to the economics’ advisor position ensures the banking sector, economy and monetary policy will all be cohesively managed from the centre. The administration is perfectly aware that there are imbalances in the financial system which is why the imposition of a property tax has been delayed until at least next year. 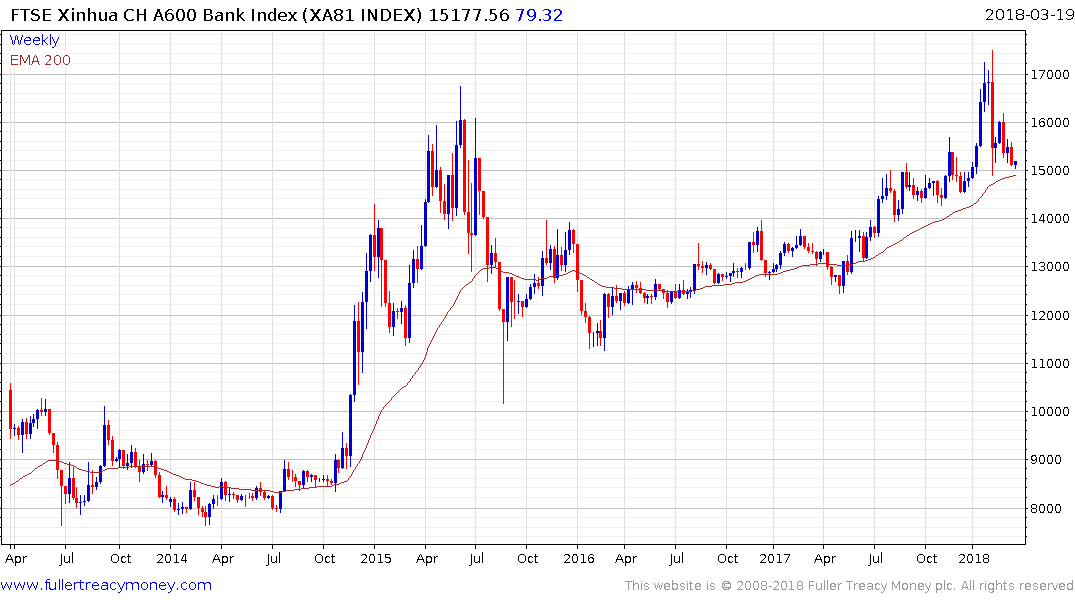 The FTSE China A600 Banks Index is back testing the region of the trend mean and will need to continue to hold the recent lows if medium-term scope for continued upside is to be given the benefit of the doubt.