Time for Thinking by Eoin Treacy

The first is that many investors have underestimated the impact of low rates on valuations.  In short, what should the stock market yield?  Not its dividend yield, but its earnings yield: the ratio of earnings to price (that is, p/e inverted).  Simplistically, when Treasurys yield less than 1% and you add in the traditional equity premium, perhaps the earnings yield should be 4%.  That yield of 4/100 suggests a p/e ratio (the inverse) of 100/4, or 25.  Thus the S&P 500 shouldn’t trade at its traditional 16 times earnings, but roughly 50% higher.

Even that, it’s said, understates the case, because it ignores the fact that companies’ earnings grow, while bond interest doesn’t.  Thus the demanded return on stocks shouldn’t be (bond yield + equity premium) as suggested above, but rather (bond yield + equity premium - growth).  If the earnings on the S&P 500 will grow to eternity at 2% per year, for example, the right earnings yield isn’t 4%, but 2% (for a p/e ratio of 50).  And, mathematically, for a company whose growth rate exceeds the sum of the bond yield and the equity premium, the right p/e ratio is infinity.  On that basis, stocks may have a long way to go.

The removal of the discount rate, as a basis for valuing cashflows has an outsized effect on all income producing assets. That implies the persistent threat of deflation which allowed long-bond yields to compress to historically low levels globally will persist indefinitely.

It’s worked so far. The question that bugs me most though is what happens when the compression of bond yields has run its course. More than 90% of all sovereign bonds yield less than 1% and when we include the global universe for all bonds that percentage only drops to 80%. From that perspective it is reasonable to conclude that the room for further yield compression is considerably less than it used to be.

The important point is that the compression of yields towards zero amplifies the convexity of income producing assets in an exponential fashion. I posted an insightful report from portfoliocharts.com on July 3rd 2019 which focuses on the mechanism through which bond returns are amplified in a zero- interest rate environment. Here is a section:

The same logic can be applied to growth stocks because they have outsized returns during low interest rate periods and their cashflows further boost the belief the situation can persist indefinitely.

This pretty much ensures that the only thing that can derail the stock market advance is outsized inflation that forces central banks to raise rates aggressively. We are only at the dawn of the Modern Monetary Theory today, so inflation is not yet a significant issue but the threat is growing as restive populations have no interest in making the sacrifices needed to pay down debt. 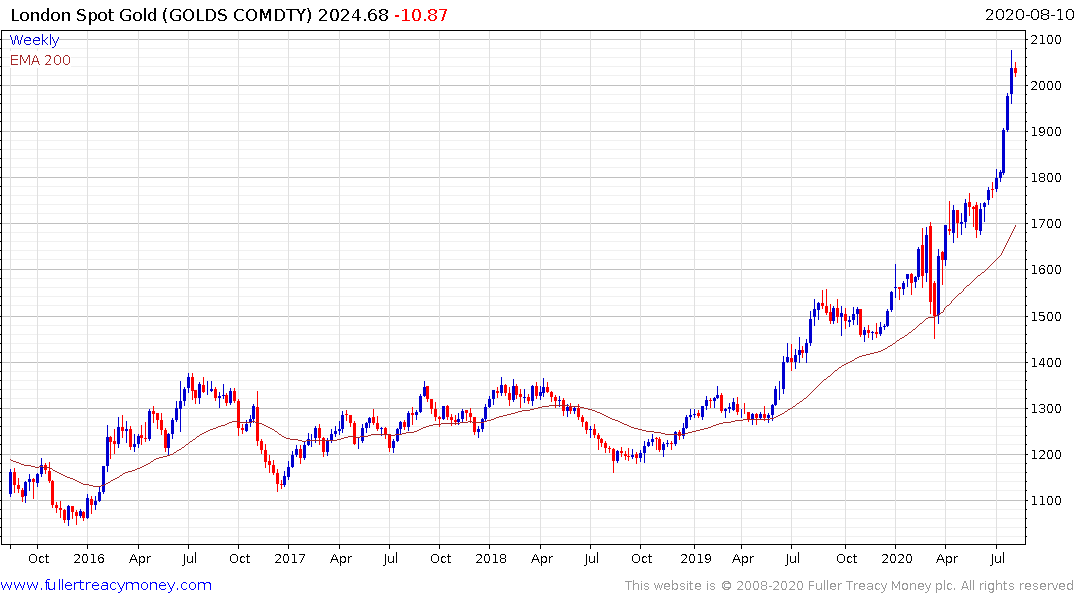 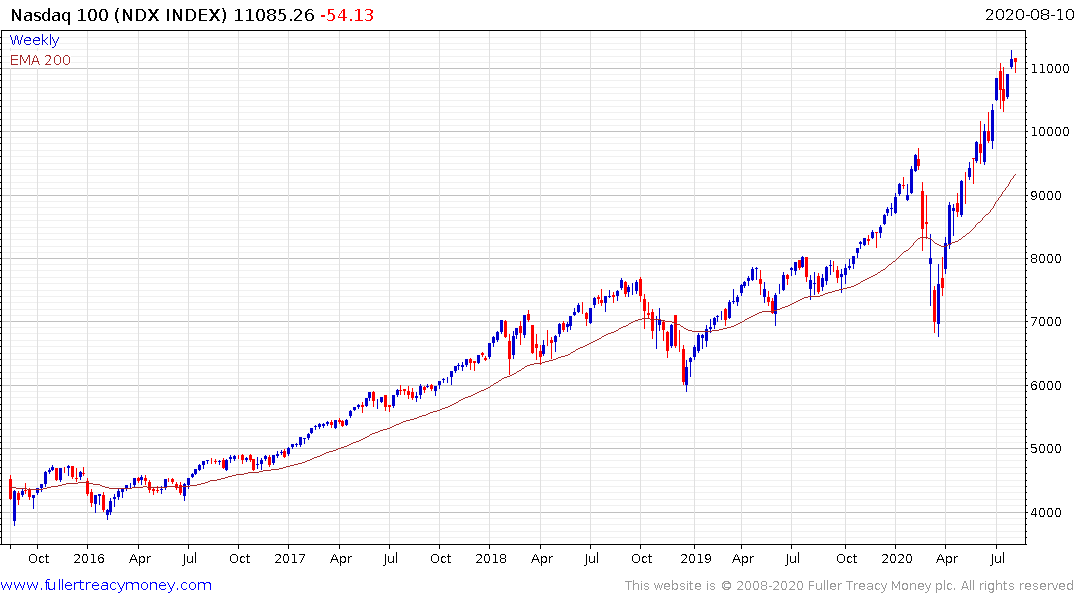 That’s the primary reason stocks and gold have been able to rally in unison right now. However, it is worth considering that gold is only at the beginning of a major trend, while technology is 12 years into one and counting. 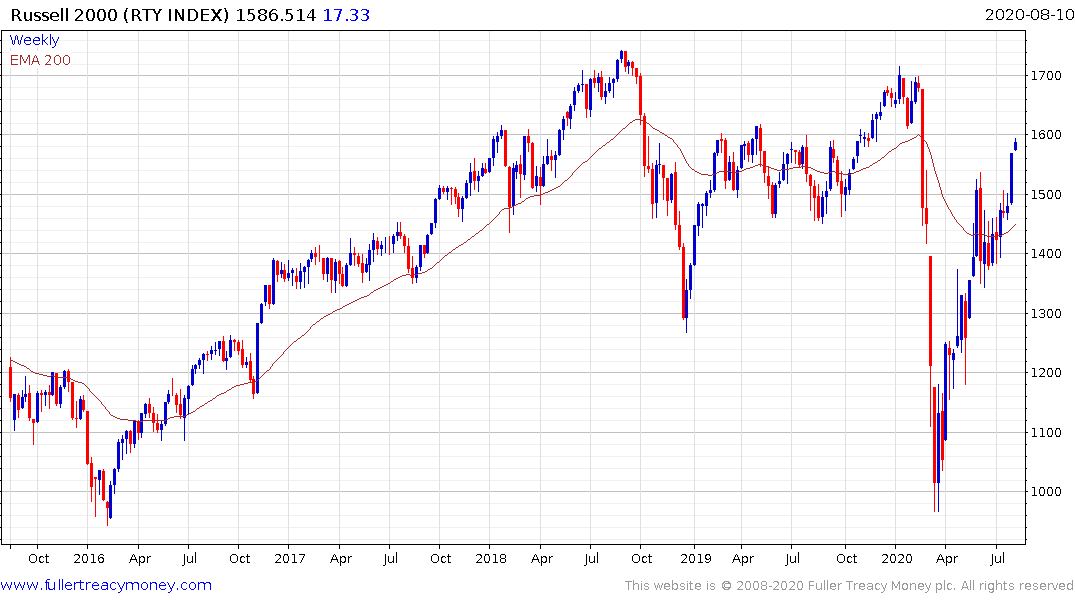 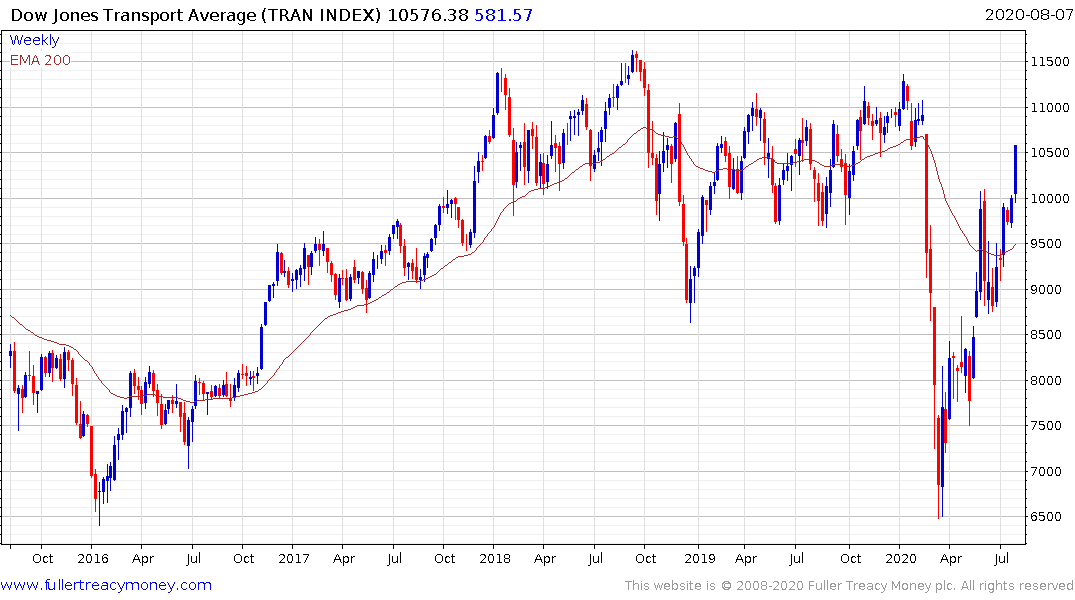 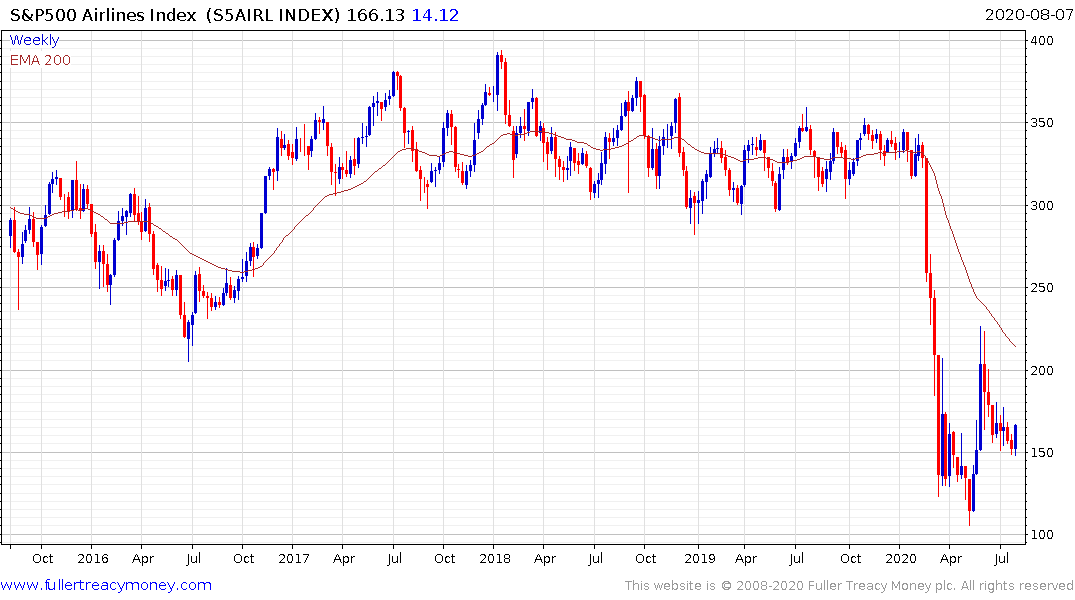 There is increasing evidence of some rotation out of the heavy concentration in mega-caps and into the wider market. The Russell 2000 is now pulling away from the region of the trend mean. The Dow Jones Transportations Average has unwound all of the February/March decline and the airlines sector looks like it is putting in a higher reaction low.