The return of the inflation spectre
Comment of the Day

The return of the inflation spectre by Eoin Treacy

Manoj Pradhan in The Great Demographic Reversal. The economic regime that began in the 1980s is, they argue, coming to an end, with rising protectionism and rapid ageing in all the important economies, including China.

As labour forces shrink, this book suggests, the number of consumers will rise relative to the number of producers, thereby raising prices. Fiscal pressure will rise inexorably, as the population ages. If governments have to choose between inflation and fiscal tightening, they will choose the former. Finally, if interest rates rise too high for comfort, governments will force central banks to lower them.

Ultimately, then, these pressures would end in another era of high inflation. Some will note, against this view, that this is not how things have ended up in Japan, where decades of easy money has failed to ignite inflation.

Maybe, that will now happen in the world as a whole: we will all end up Japanese. Certainly, history never repeats exactly.

The stagflation of the 1970s, especially the squeeze on profits and stock market collapse, were due to features of the economies of that time, especially the political strength of labour. So, things may play out quite differently this time.

Inflation has not come back. It may never do so. But the political and policy shifts we are seeing today, after Covid, together with the longer-term changes in the world economy, have raised the chances of an inflationary shock of some kind. Investors must take this possibility into account.

No one factor contributes to a new secular inflationary cycle. Many trends need to coincide to shape consumer behaviour so they front load purchases rather than delay in the hope of lower prices later. That only happens when people are forced to act. It doesn’t happen voluntarily.

Disinflation, deregulation and globalisation over the last forty years contributed to the absence of an inflationary trend. Globalisation has peaked as geopolitical tensions rise. That is contributing rising support for national priorities rather than the furthering of the global community ideals.

Regulation and unionization are a function of how powerful the perception of inequality is. As the question of how to pay for the pandemic largesse is raised anyone who has money/profits will be targeted for fees. That means higher taxes on the wealthy and higher corporate taxes. 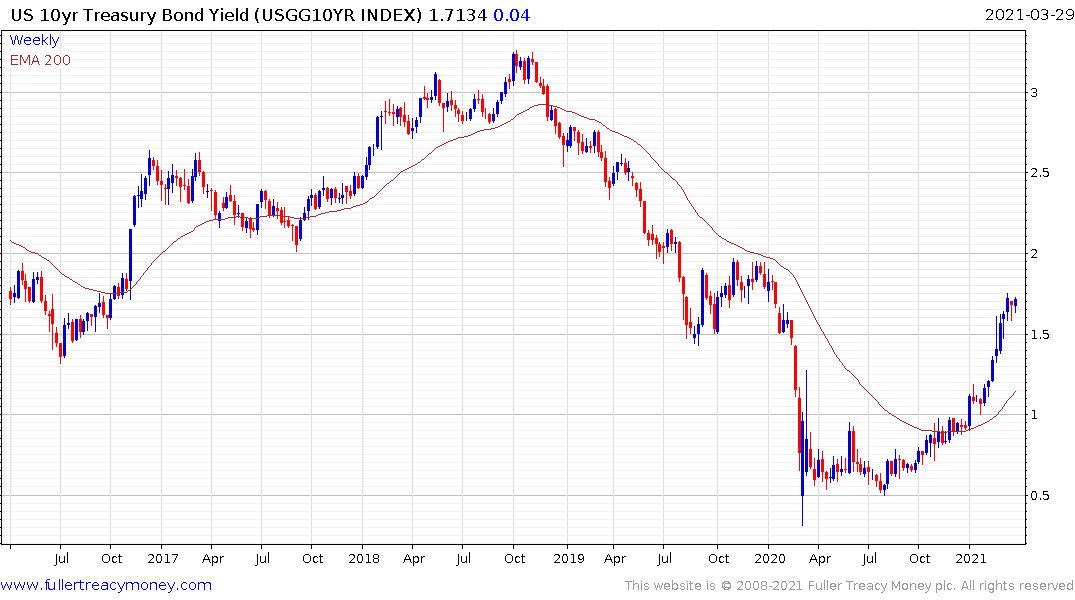 The big questions about disinflation centres on demographics. The youth will inherit the earth could not be more relevant today. The aging boomers will represent the largest pass down of wealth in history. That will benefit many people in their thirties through fifties. For those left behind there will be even greater demands for a level playing field. Bank lending is increasingly becoming subject to government dictate as a result. Credit and monetary growth are necessary conditions for a new inflationary cycle.

I am not convinced by the Japanese stagnation case study. Could Japan have succeeded in fomenting inflation during one of the most profound global disinflationary periods in history? At least it made the objective harder.

Considering the Bank of Japan’s determination to devalue the Yen, it is reasonable to expect inflationary pressures to benefit Japan more than anywhere else. It may also be among the first places to see evidence of inflation appear.