The Dawning of a Golden Decade
Comment of the Day

The Dawning of a Golden Decade by Eoin Treacy

Due to the Covid-19 crisis, monetary and fiscal policy-makers around the world are feverishly seeking new ways to stimulate the economy. Conventional quantitative easing is still part of the standard repertoire of central banks. Deflationary tendencies are once again hitting the economy with full force in the current recession. In the past, deflation could be only partially warded off by central bank purchases of securities. Spurred by the zero interest rate policy that is now widespread throughout the world, discussions have been ongoing for years as to what the next stage of stimulus will look like. Leading the race are proposals such as deeply negative interest rates, yield curve control, or the implementation of

For the global reserve currency, the US dollar, the introduction of negative interest rates would be a sacrilege. But even this breach of taboo can no longer be ruled out. Most recently, the federal funds futures have been pricing in negative interest rates for the first time. Yet, Jerome Powell has spoken out against such a move. However, many market participants have not forgotten his 2019 monetary policy U-turn. The rapid change of course at that time towards a further expansion of the Federal Reserve’s balance sheet now makes it much more difficult for him to convince the market that the next taboo could not be broken. Ultimately, the expectations of market participants could also contribute to the implementation of such a decision, because in the current fragile market environment the Federal Reserve is afraid of disappointing participants and thus triggering further financial market distortions.

In the case of longer-term yields, a so-called yield curve control based on the Japanese model would be one of the options. This is nothing more than a planned-economy price setting in the bond market in order to fix a slightly rising yield curve. This is intended to promote the creation of credit through maturity transactions and to stimulate investment through low long-term interest rates. The increasing sclerotization of the economy would be the inevitable consequence. Modern Monetary Theory (MMT).

For more and more decision-makers the ideas of Modern Monetary Theory (MMT), aka Mugabe Maduro Theory, are becoming as enticing as the apple in the Garden of Eden. We have already subjected this theory to an extensive and critical examination in several issues of our In Gold We Trust report, 453 as well as this year. The recently published book by one of the MMT’s main representatives, Stephanie Kelton, summarizes in its title the great temptation to incur debt without atonement: The Deficit Myth.

The USA embarked on a raft of procyclical fiscal policies following President Trump’s electoral success in 2016. The question that has been overhanging the market for the last few years was what would happen in a recession when so much fiscal assistance had already been expended. Now we have our answer. Open-ended massive fiscal stimulus, exceeding wartime spending is the solution to any problem.

That originally raised the question of whether we are going to see negative deposit rates everywhere. The bond market was behaving as if yield curve control was a de facto policy until this week. However, the breakouts in Treasury yields suggest otherwise. Now the question will turn to the sustainability of government debt amid enthusiasm about economic recovery. 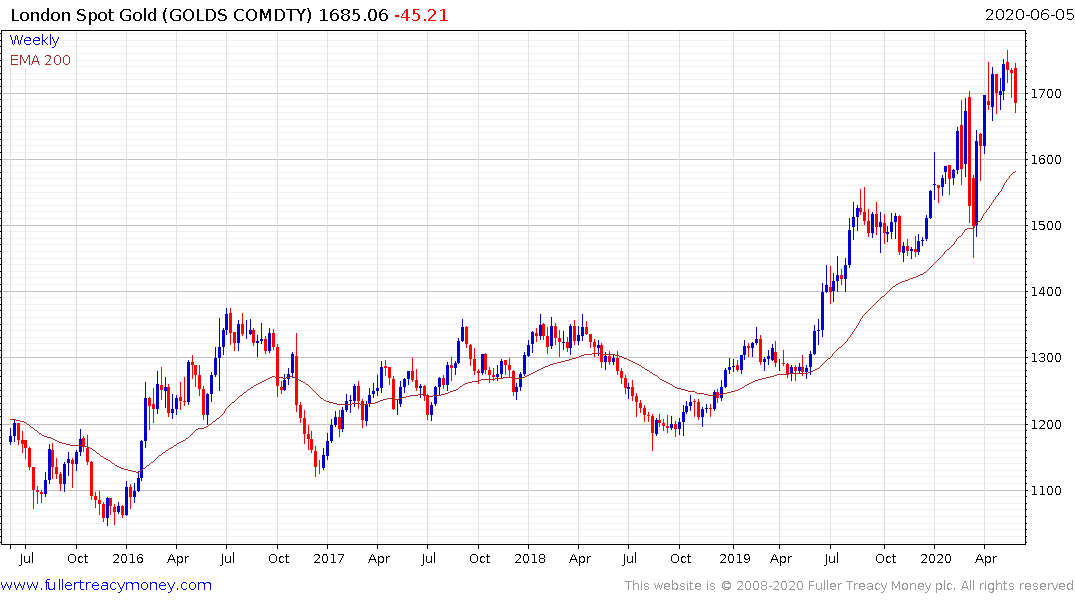 That is currently pressuring gold prices because there is less demand for safe havens. However, the debt sustainability issue is a real one and not about to disappear. The reality of debt monetisation and the deleterious effect that has on the purchasing power of fiat currencies is nontrivial. That is the primary reason for the Dollar’s recent weakness. 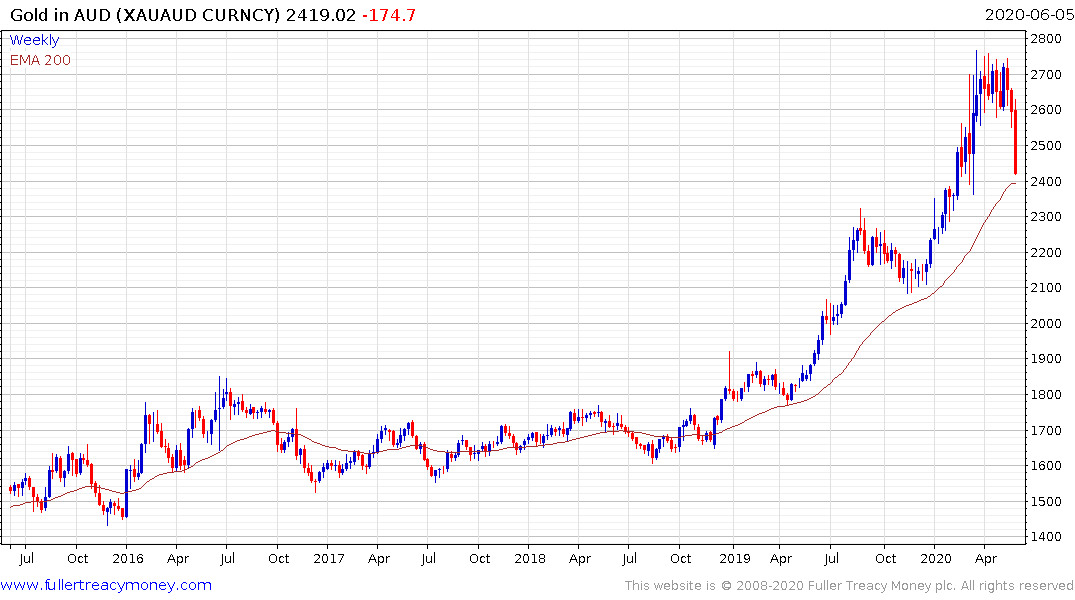 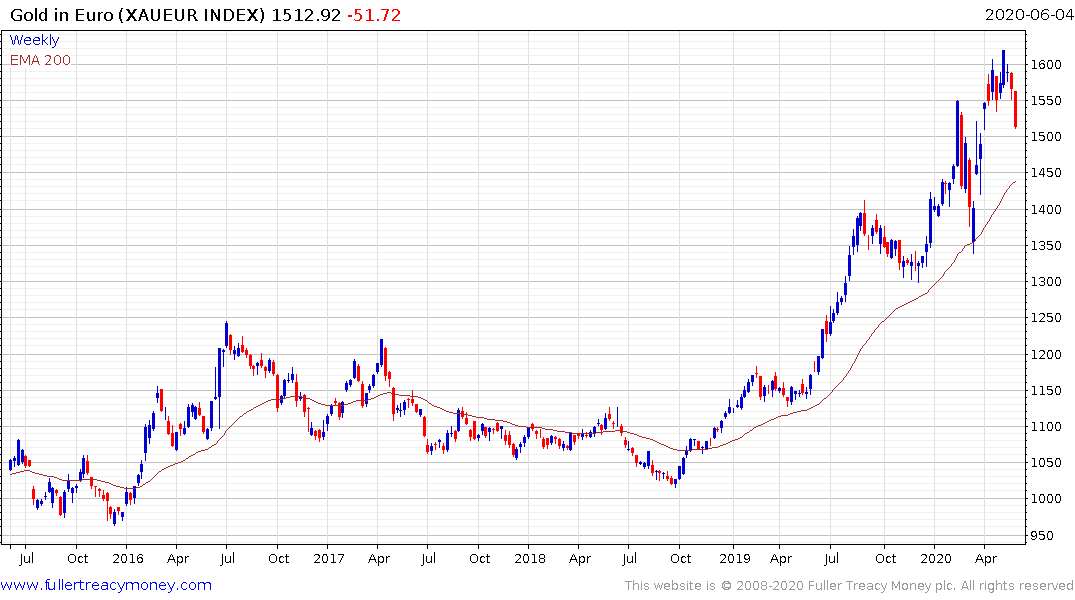 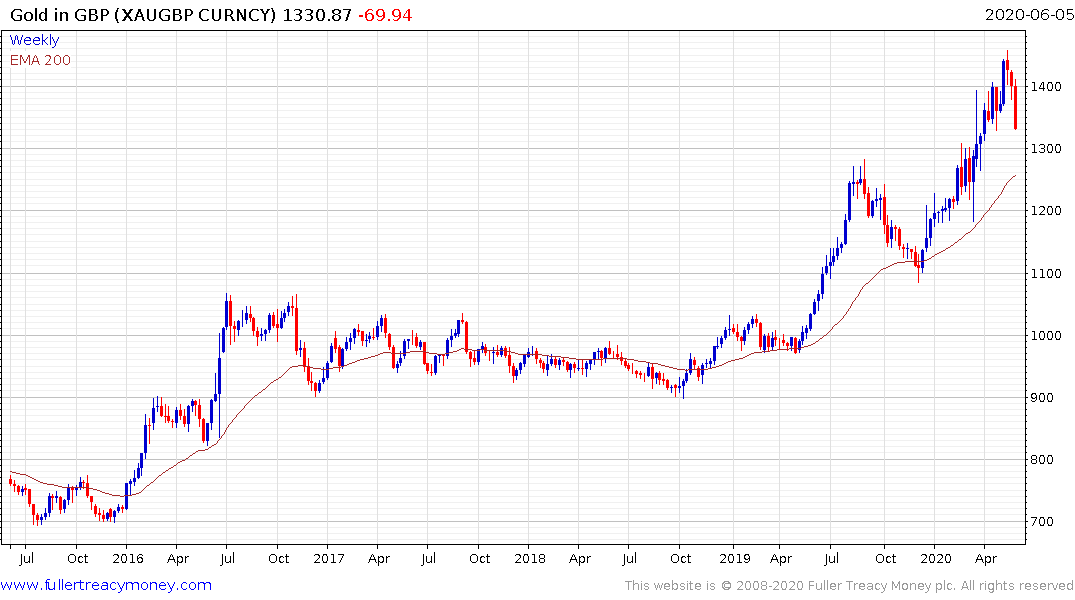 Gold is outperformed when compared to international currencies over much of this year and is now underperforming against those same currencies. Meanwhile it has been much less volatile when measured against the US Dollar. Sustained moves below the trend mean would be required to question the consistency of medium-term uptrends.

This change in thematic make-up of the market is also an important tailwind for emerging markets because they are best placed to grow out of their debt issues. India in particular remains well placed to also benefit from increased competition between the USA and China.