"If it hadn’t been for the BOJ’s ETF buying, the Nikkei 225 would have breached 20,000," said Ayako Sera, a market strategist at Sumitomo Mitsui Trust Bank Ltd in Tokyo. "For investors, March was a month to reduce exposure to Japanese equities."

The BOJ bought 1.9 trillion in ETFs in the first quarter, which is 32 percent of its annual purchase goal. To be sure, Kuroda has said that the target isn’t set in stone at exactly 6 trillion per year, and annual purchases don’t necessarily have to be measured from January to December. On Tuesday, Kuroda said the central bank is discussing how to eventually exit from its massive monetary stimulus but that it’s still too early to reveal details.

Not that long ago, many investors expected the BOJ to join the global trend toward stimulus tapering by reducing ETF buying this year. That came after the Topix and the Nikkei 225 soared to their highest levels in a quarter century. But then the market slumped, and the situation changed.

Foreigners have muddied the picture, dumping Japanese equities as the yen gained to a 16-month high against the dollar. They yanked almost 8 trillion yen from cash equities and futures in the first quarter alone, according to data through March 23. Suddenly, not many people are expecting a BOJ taper anytime soon.

"Obviously, the BOJ has to stop buying at some point," Oguchi said. But "I think we have to wait until the Tokyo Olympics” in 2020, he said. “The BOJ won’t change their policy at least for another two three years."

Kiyoshi Ishigane, chief strategist at Mitsubishi UFJ Kokusai Asset Management Co. in Tokyo, agreed. “Of course, they won’t cut back," Ishigane said. Like the others, he doesn’t expect the bank to increase the target, either. "The BOJ would buy more if they could stop the market from falling, but it knows that it can’t."

Bank of Japan buying of stocks represents a powerful tailwind for the market. Both the Bank of Japan and the Swiss National Bank have been actively buying shares, in addition to bonds, in an effort to promote inflation. This policy has the added benefit of the central bank gaining interests in tangible assets with no fixed maturity dates. Dividend growth potential then offers at least a partial inflation hedge to central banks they might not otherwise have had..

20,000 is a big level for the Nikkei-225 for the simple reason that it failed to sustain a move above it between 1993 and 2016. Following the breakout last year, it has represented an area of support and a sustained move below that level would be required to question medium-term scope for additional upside. 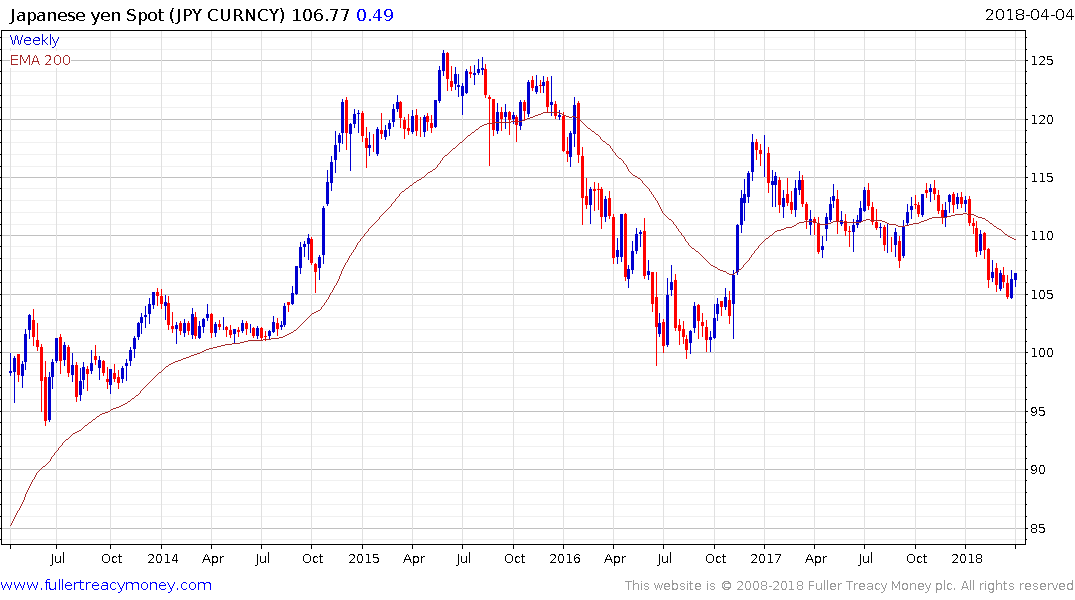 The Dollar has also lost momentum against the Yen and is back challenging the 5-month progression of lower rally highs. There is increasing potential for a reversionary rally back up towards the ¥110 level, but a sustained move above that area would be required to signal a return to medium-term demand dominance.