Stronger Dollar Punishes U.S. Earnings From P&G to DuPont
Comment of the Day

Other companies, like Honeywell International Inc., were able to anticipate the currency changes. Back in October, Honeywell CEO Dave Cote reversed his policy and started using currency hedges because he was -- rightly -- concerned the euro may sink further.

P&G, which makes about two-thirds of annual sales outside of the U.S., said currency effects will continue to be a drag in the current fiscal year and reduce sales by 5 percent, leading to a decline of as much as 4 percent from a year earlier. Like Kimberly-Clark Corp. and other consumer companies, Cincinnati- based P&G was especially hurt by a slump in Venezuela, where falling oil prices have heightened the bolivar’s volatility.

Bristol-Myers, the New York-based maker of cancer treatments such as Yervoy for melanoma, gets about half its sales outside the U.S. The dollar’s strength weighs down the company as it pursues growth by focusing on a new class of cancer drugs.

The big fall in oil prices and the big rally in the Dollar continue to influence decisions in boardrooms. 3M and Honeywell were little changed today following their results not least because their currency hedging strategies paid off. Following a quarter where companies that hedged their exposure outperformed, we can anticipate that more companies will be hedging their currency exposure by the end of this quarter. 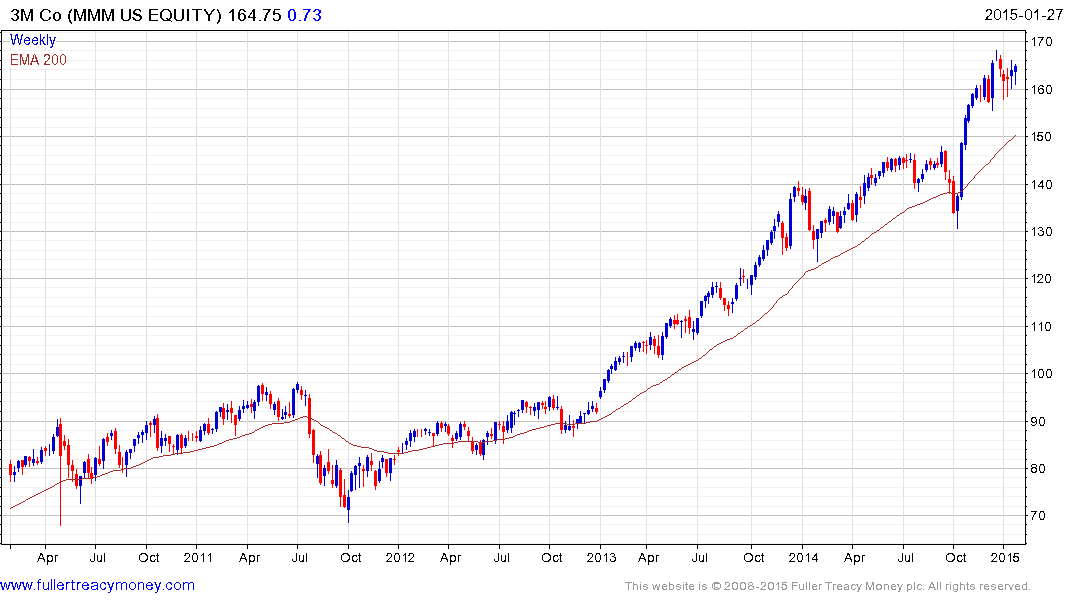 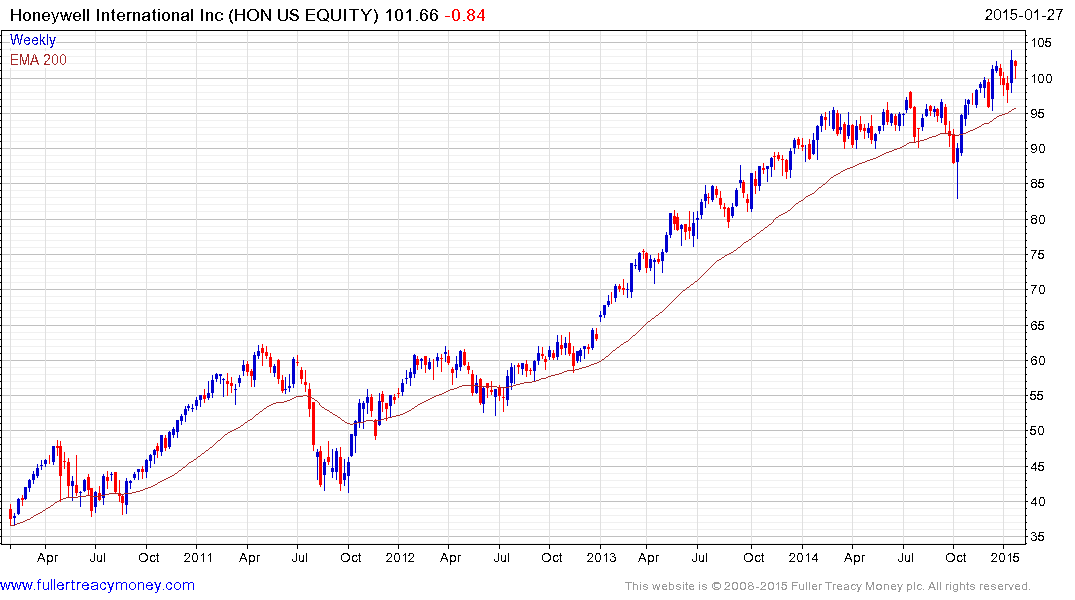 Microsoft’s decline today broke its progression of higher reaction lows and it will need to sustain a push back above the 200-day MA to reassert medium-term demand dominance. 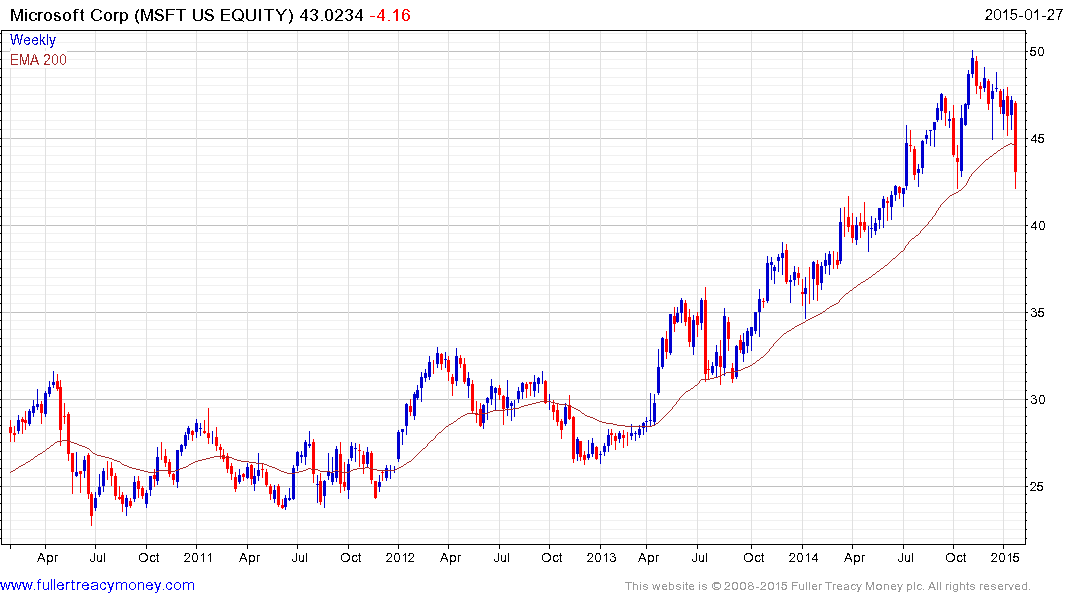 P&G has returned to test the region of the 200-day MA and the upper side of its underlying range. It will need to hold in this area if medium-term potential for additional upside is to continue to be given the benefit of the doubt. 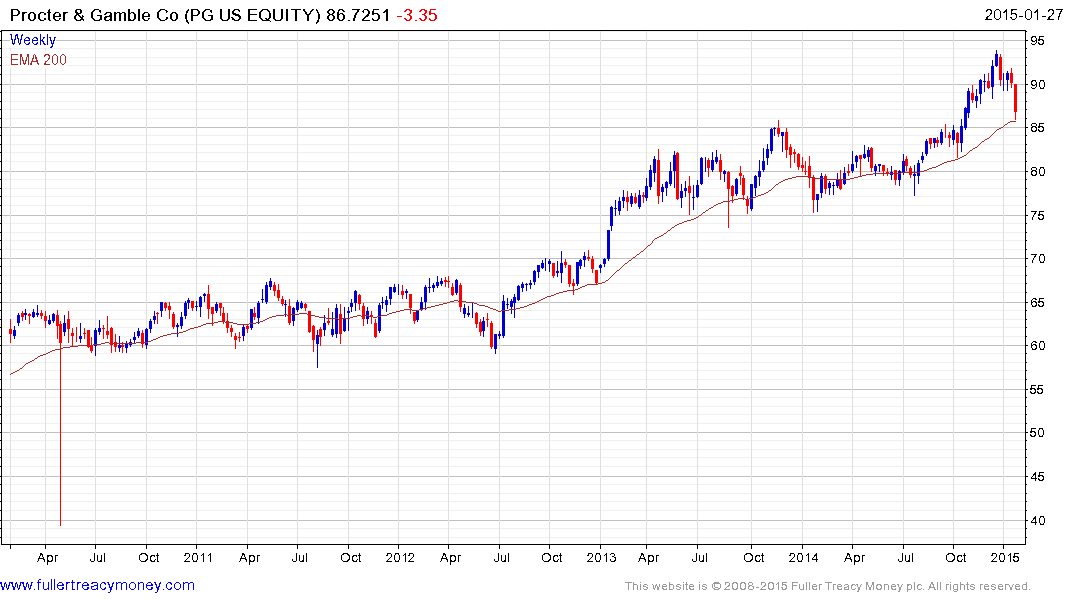 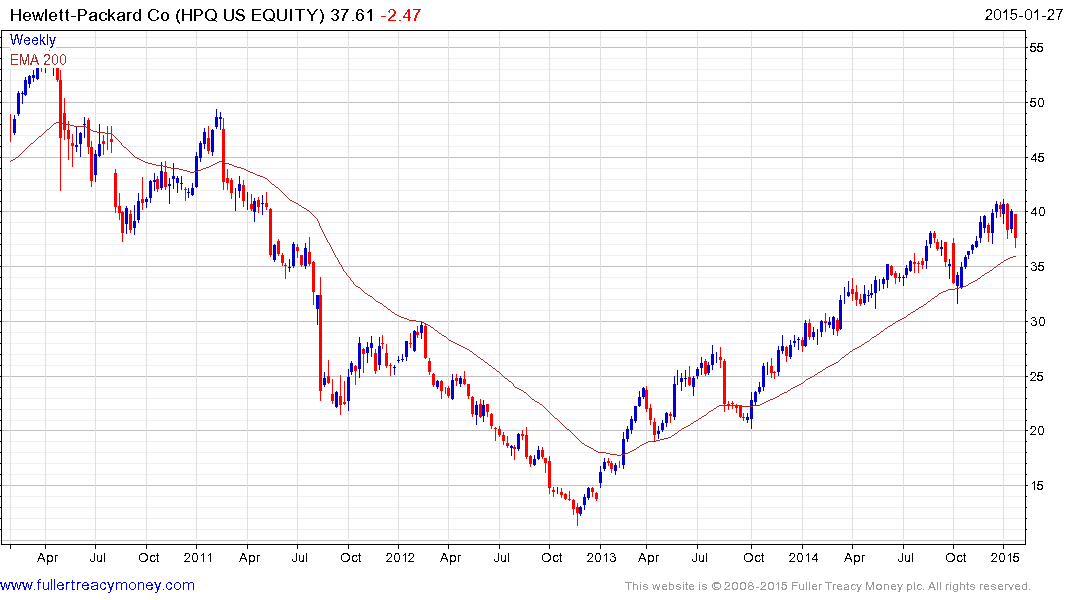 DuPont bounced from the region of its 200-day MA following today’s earnings announcement.
Caterpillar has returned to test the lower side of its four-year range and will need a clear upward dynamic to signal a return to demand dominance. 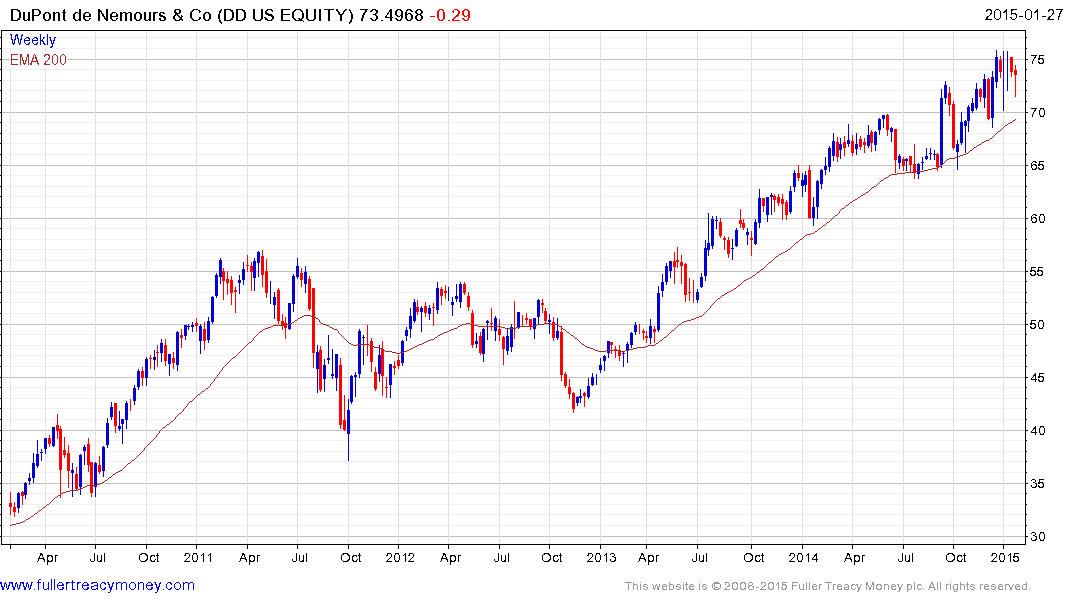 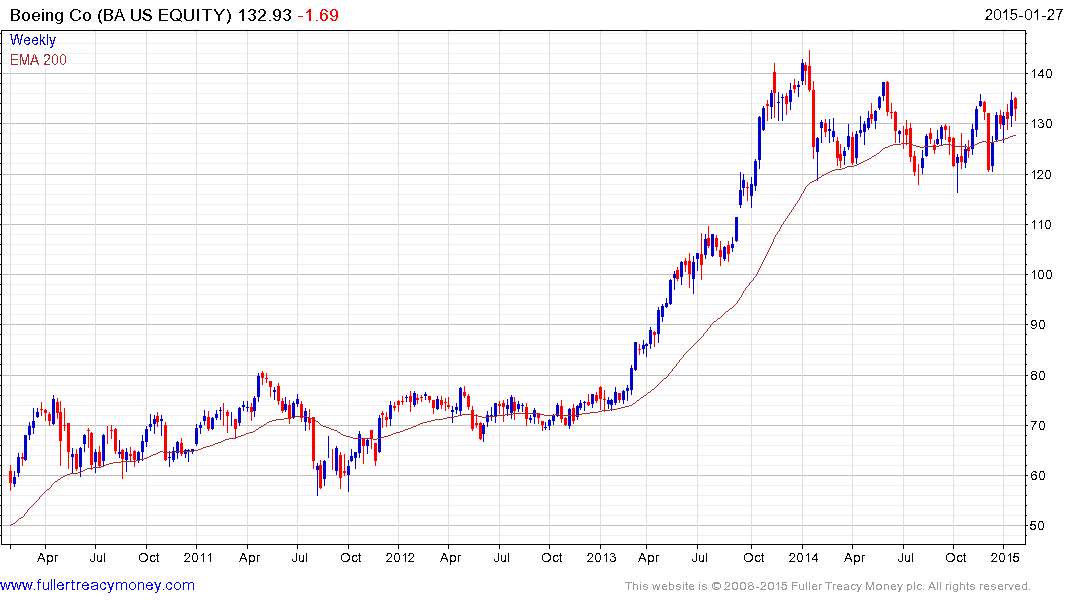 Boeing’s earnings announcement is tomorrow. The share has been ranging with a mild downward bias for a year and is currently testing the region of the most recent lower high. Tomorrow’s announcement has the potential to act as either a bullish or bearish catalyst. 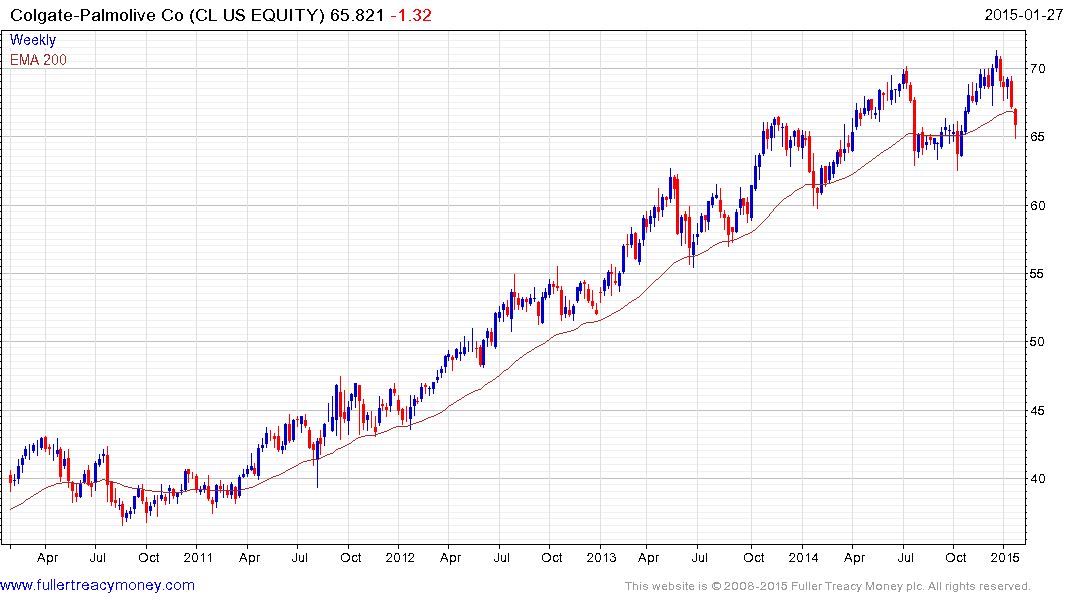 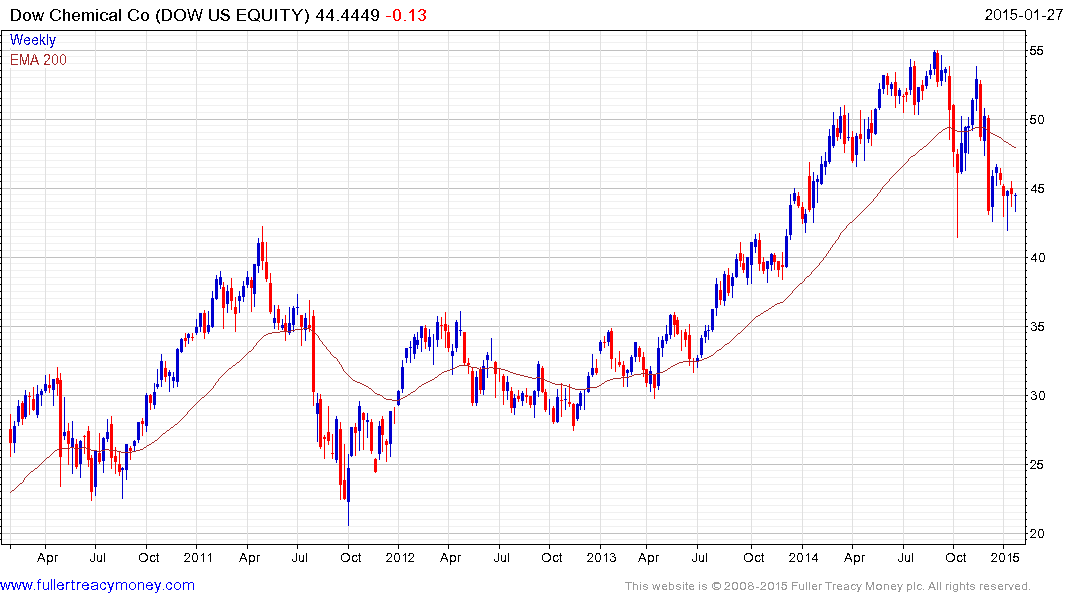 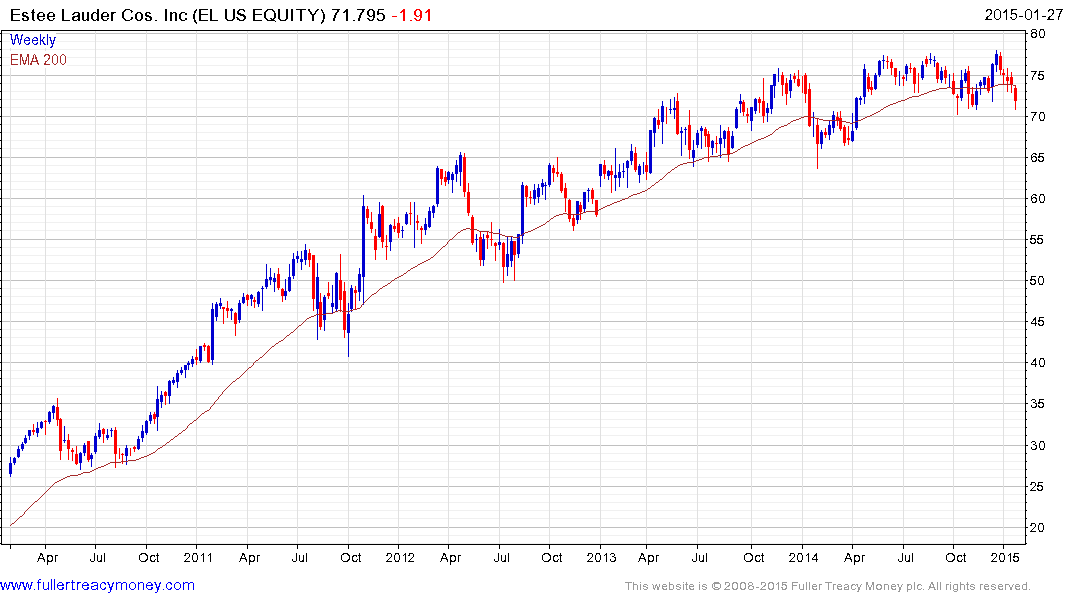 Estee Lauder reports on February 5th. The share’s chart pattern is noteworthy because it has experienced a marked loss of momentum since mid-2013 and is currently testing the most recent low.  It needs to hold the $70 area if top formation completion characteristics are to be avoided.