Seven Things to Keep in Mind About Turkey by Eoin Treacy

No. 7. Growing chatter about capital and convertibility controls
​It’s not a great surprise that there is now more talk domestically about the possibility of Turkey implementing capital controls to limit outflows and counter the dollarization of the economy. This increases the incentive for the private sector (both local and foreign) to accelerate its dis-engagement from the local currency. With that comes even greater financial and economic pressure.

The bottom line for Turkey is not a pleasant one. Due to the coincidence of domestic and external pressures, the authorities have limited room for maneuver when it comes to policy formulation and financing, especially if they decide to continue to go it alone. It is becoming less and less likely that the government will be able to avoid some combination of higher interest rates, budgetary austerity, recourse to IMF financing and some forms of capital controls. Indeed, the longer it waits to tighten policies domestically and engage with the IMF, the greater the risk that all of this will come about.

Investors should brace for more volatility for the Turkish lira and bond spreads, as well as more technical contagion for other emerging markets. The spillover for the advanced world -- particularly Europe -- would only become consequential if the sources of contagion were to spread.

Erdogan has some big decisions to make, the most important of which is when to apply for foreign assistance. If that happens sooner then international confidence will be preserved. If the crisis deepens and defaults mount then the discount demanded by investors for assistance will be much higher. 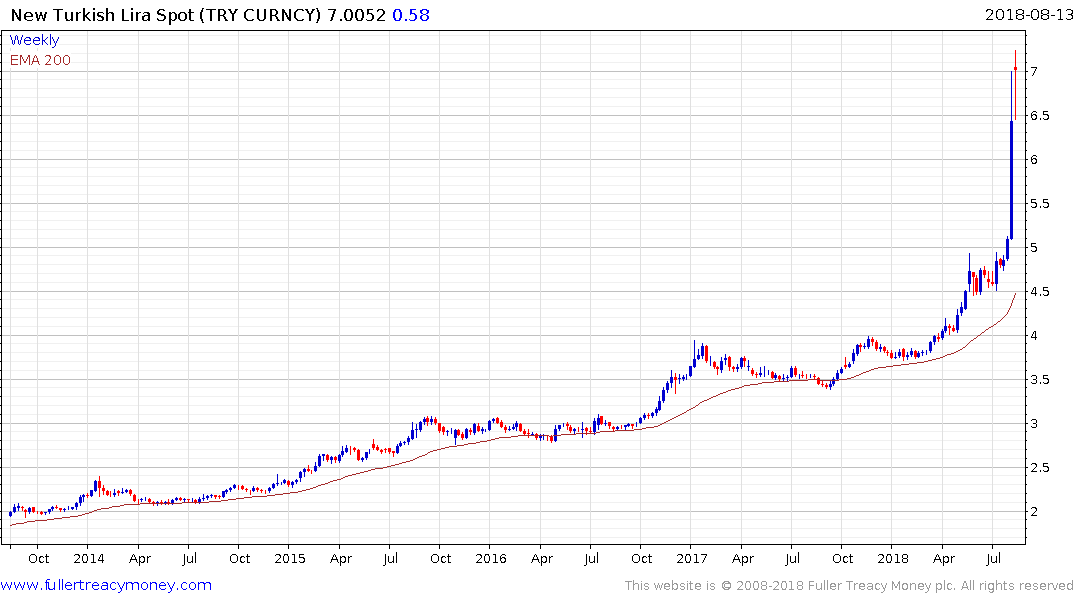 Turkish 1-week repo rates are 17.75% ahead of an inevitable hike this week.  Argentina’s are 45% and the Peso is still declining. If Turkey persists in going it along then we already know where the trajectory of rates is headed. That knowledge increases the potential corrective measures will be put in place. 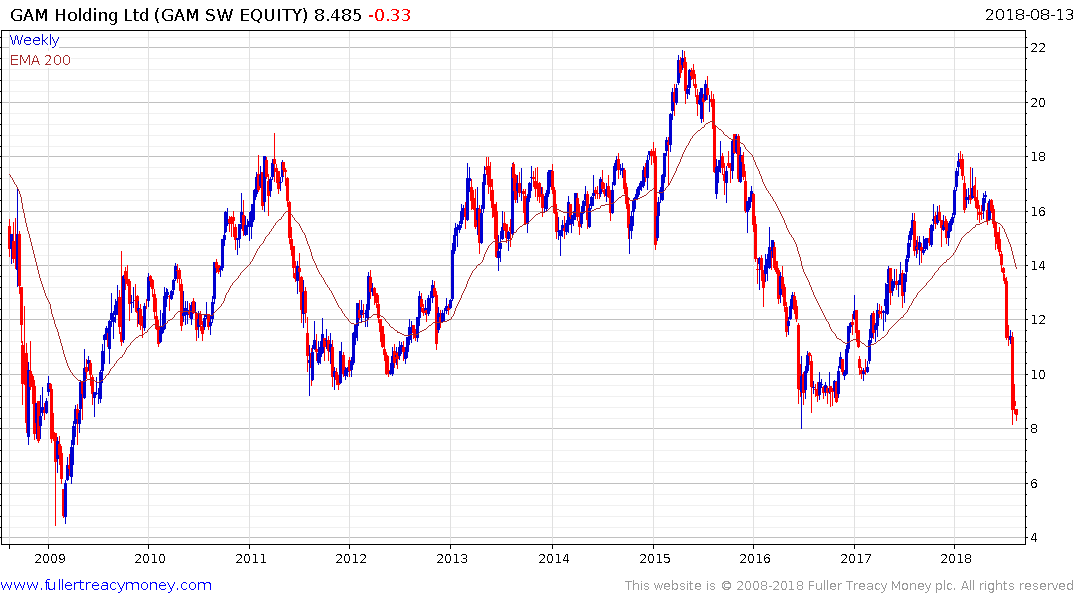 GAM Holdings continues to accelerate lower and one wonders how many Turkish positions its, now closed, unconstrained funds had? The share is now approximating the lows seen in 2016, 2011 and 2010 and is more than 50% overextended relative to the trend mean but a clear upward dynamic will be required to check momentum beyond a pause. 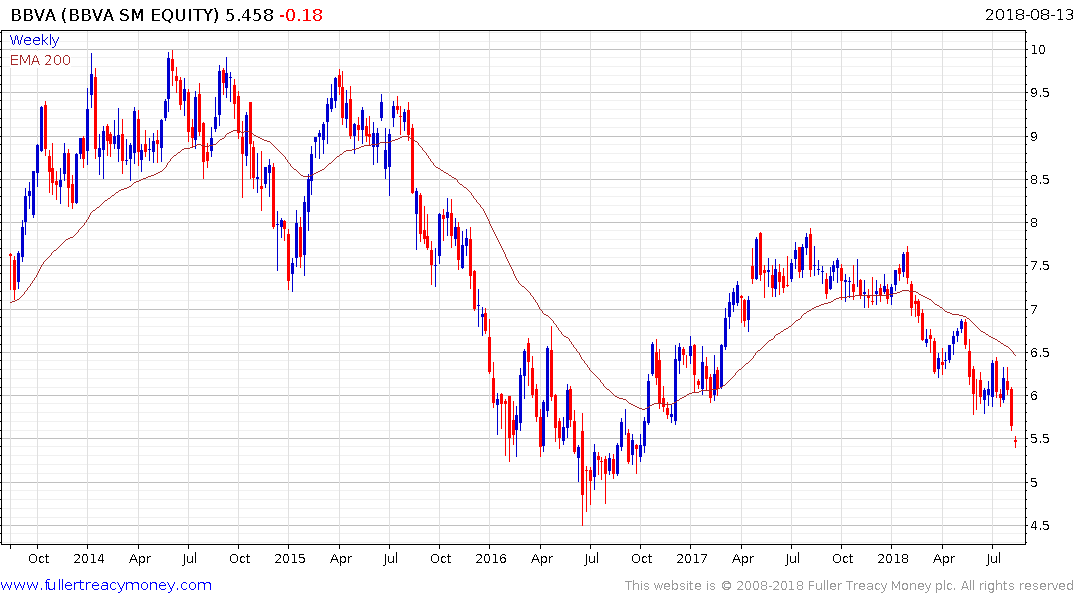 BBVA has clear exposure to Turkey and the share has been trending lower since the middle of last year. 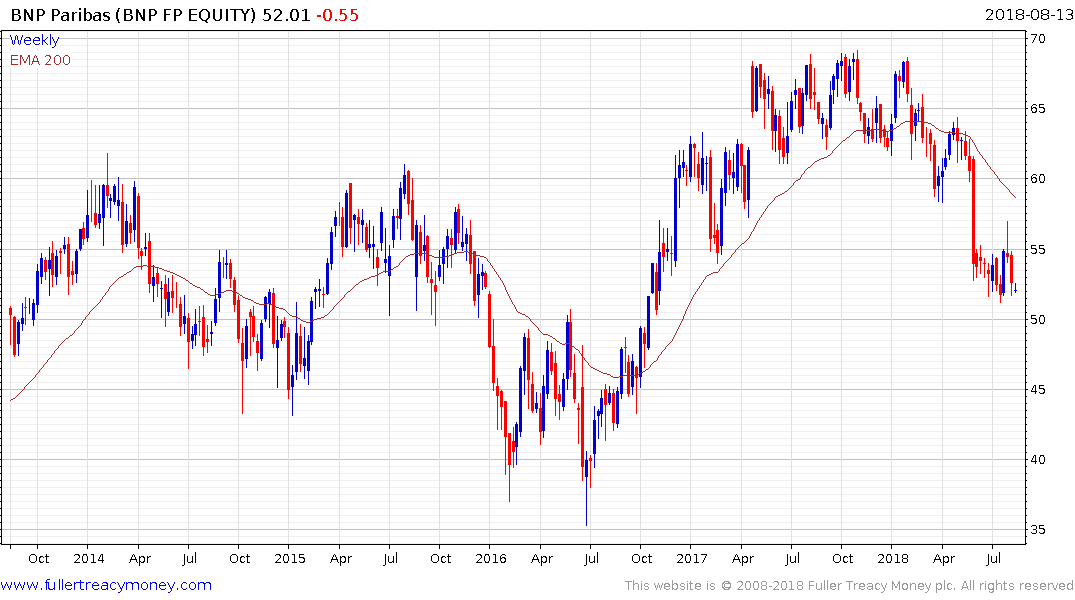 BNP Paribas had been among the best performing Eurozone banks but it failed to sustain the break above €60 and a sustained move above the trend mean would be required to check the downward bias. 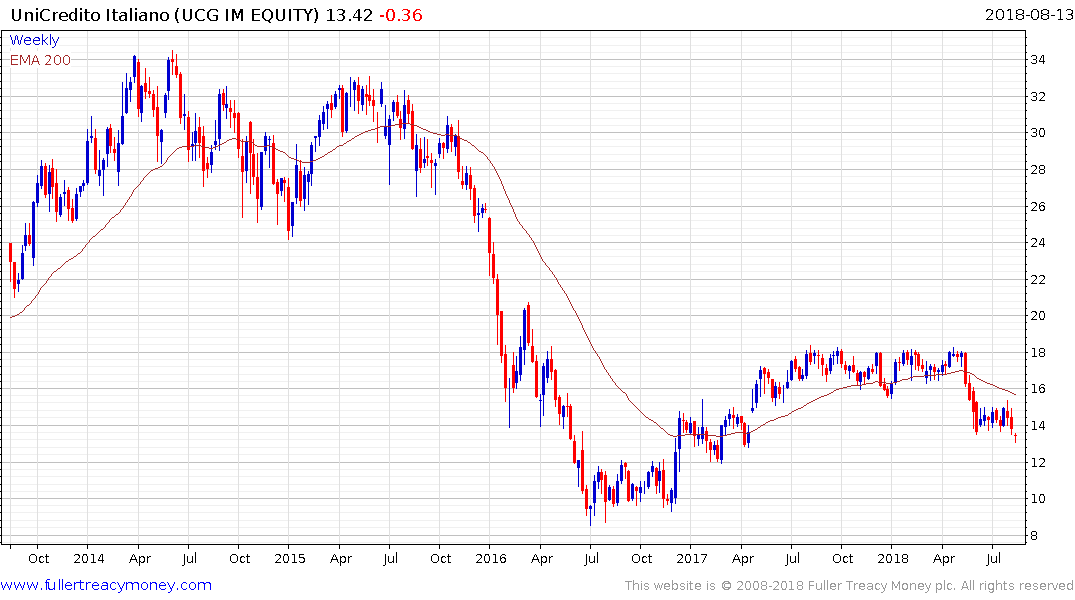 Unicredit broke down from a six-month range in May and dropped to a new reaction low today. It will need to bounce back in a dynamic manner to check the downward bias.