In other words, in the past year, banking-system liquidity has risen by about a fifth, but net credit growth has fallen by about a third. The reason is clear. Shadow finance outstanding fell by a full 10% in 2018—by far the sharpest contraction on record.

Regulators realize they have a problem. They are now trotting out new central bank lending facilities to goad banks into extending credit to small enterprises. And the economy still has some cushions. Infrastructure investment is rising again. Consumers are struggling, but less than headlines would suggest.

Both of these bulwarks aren’t as strong as a couple of years ago—consumers are more indebted and a separate campaign against off-balance sheet infrastructure fundraising is still crimping investment. If the property market falls apart, China will be in serious trouble.

China’s inefficient financial system has long needed surgery. By excising the shadow banking system without a proper transplant to replace it, regulators risk killing the patient.

China’s headline government debt is comparatively small by international standards. However, its private sector debt is larger than the USA’s government debt. By first cutting off access to funding from the state banks, then cutting off shadow banking, then banning US Dollar loans, successive windows for funding have limited access of businesses to capital.

Many Chinese businesses survive on razor thin margins and depend on access to cheap liquidity to grease the wheels of trade. The large semi-state or wholly state-owned companies do not have to worry about profits and have no problem with access to capital.  The speed with which $450 billion of US Dollar was issued led to the practice being banned but is also a testament to the demand for capital from the highly leveraged local government/property developer/industrial sector.

The current efforts underway to contain leverage and malinvestment are laudable on a macro scale but the risk is it affects the housing market as the article also highlights. For a country that has been dependent on growth at all costs for so long, that represents the linchpin of success or 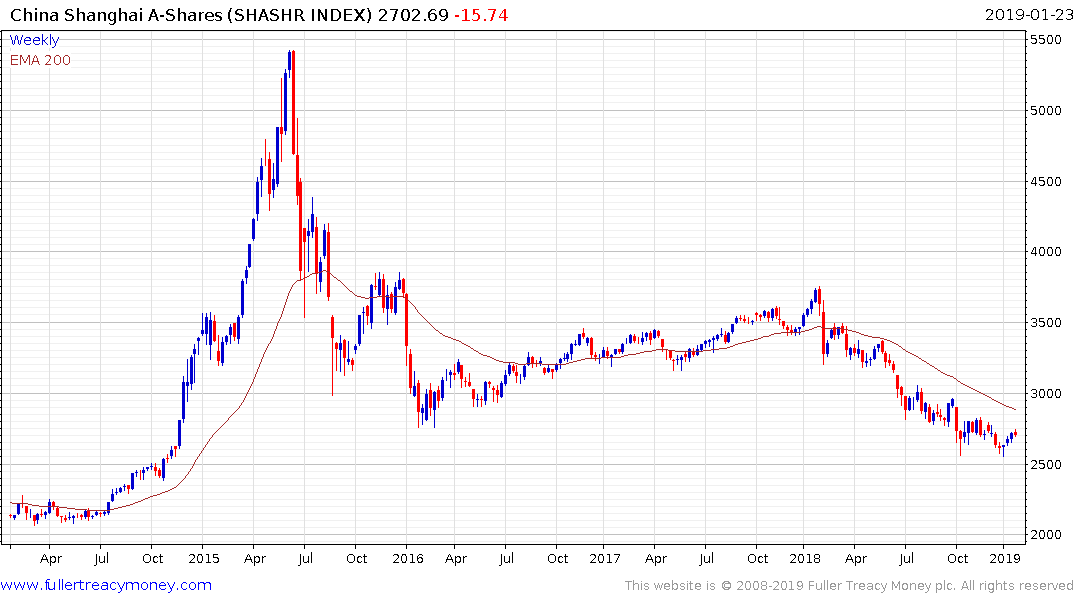 Meanwhile the stock market has lost downward momentum but remains in a downtrend.