While Technology stocks are the unequivocal leader year to date, they are not the leader since the March 23rd lows (Exhibit 1), which in our view was the beginning of a new economic cycle and bull market. This is a major difference from 1999 when we were clearly still in a late-cycle economic expansion when markets get more narrow in their search for growth, quality and defensiveness. At the beginning of a new economic cycle, breadth expands to the lower-quality, more cyclical areas of the market that have lagged. That is exactly what we have witnessed when using the March lows as a starting point, particularly when looking at sectors on an equal-weighted basis.

There is no debating the fact that the past month has been very difficult for many of the early cycle/recovery stocks. However, we think it represents a consolidation of the first leg higher during which cyclicals have trounced defensively oriented stocks (Exhibit2). To us, this represents a clear change of leadership from the late-cycle environment of the past few years during which cyclicals consistently underperformed defensives. We think the recent correction in early cyclicals looks very similar to the correction experienced in 2016 coming out of the global manufacturing recession. In that particular episode, the initial leg higher saw cyclicals outperform defensives by 26% to recapture its 200-day moving average. This time around it was a 42% rally. In 2016, Brexit concerns led to a two-month consolidation. This time it's a rise in COVID cases leading to fears of another lockdown and a looming fiscal cliff. We expect both concerns to subside later this month if fatalities fail to follow case count increases and another fiscal stimulus bill is eventually passed. If the cyclical vs defensive leadership isn't enough evidence that something important changed in March, take a look at small versus large caps or the very broad Wilshire 5000 vs the narrower S&P 500 (Exhibit 3).

Rather than compare the pace of the current advance with what we saw in 1999, I think it is more appropriate to highlight the COVID-19 fear mongering to what went on ahead of Y2K. Back in 1999 there was palpable fear all computers, everywhere, would stop working on January 1st 2000. That catalysed spending decisions in corporations globally to frontload technology upgrade decisions into 1999. Y2K effectively pulled forward sales from 2000. 2001 and 2002 and tech sales looked like they would go on forever.

Today we are looking at a clear acceleration of the digitisation trend which has been underway for a decade. Cloud computing, 4G and 5G connectivity, subscription business models, conference calls and video conferencing, online retail, entertainment and gaming are all pulling sales forward into 2020. That trend is likely to persist as long as the coronavirus deters human interaction.

2021 is therefore likely to be problematic. It is the first and worst year of the US Presidential cycle. It is highly likely the mRNA vaccines being developed by Moderna, Pfizer and others will be effective and therefore fear is likely to trend lower as they become available. The massive stimulus, spending programs, payment holidays and eviction bans will wind down. At the same time the massive holes in city, state and country balance sheets will be exposed.

Without clear signalling that debt will be monetised aggressively, there is likely to be economic and market trouble. This is the clearest rationale for why we will continue to see significant monetary and fiscal assistance provided to the market. It is also why significant investment in infrastructure is more likely than not. 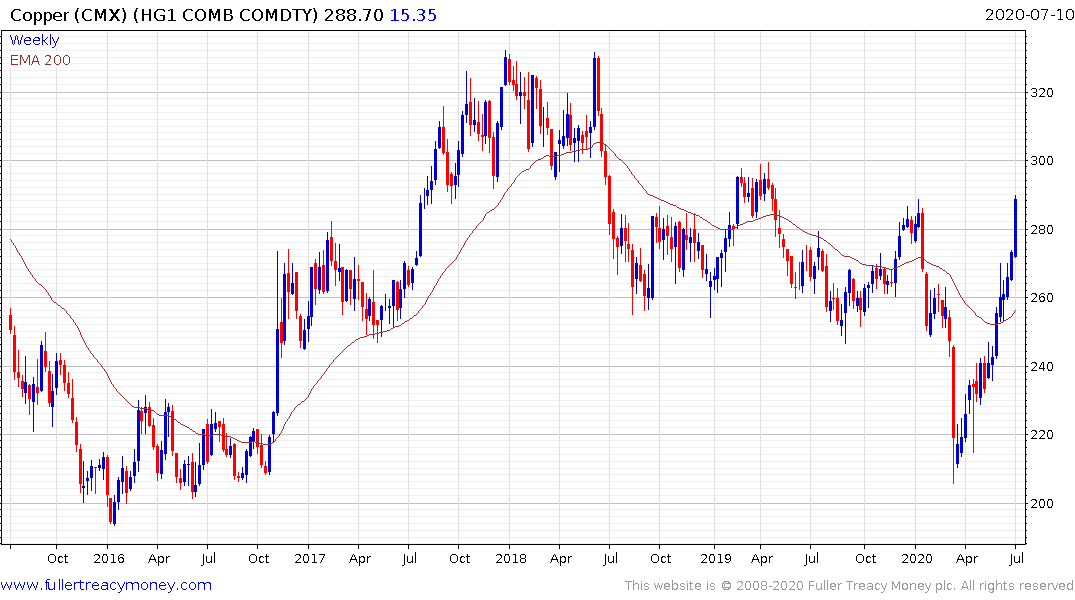 Copper rallied to break a more than two-year downtrend last week. While some consolidation of the short-term overbought condition is now likely, a sustained move below $2.50 would be required to question recovery potential. 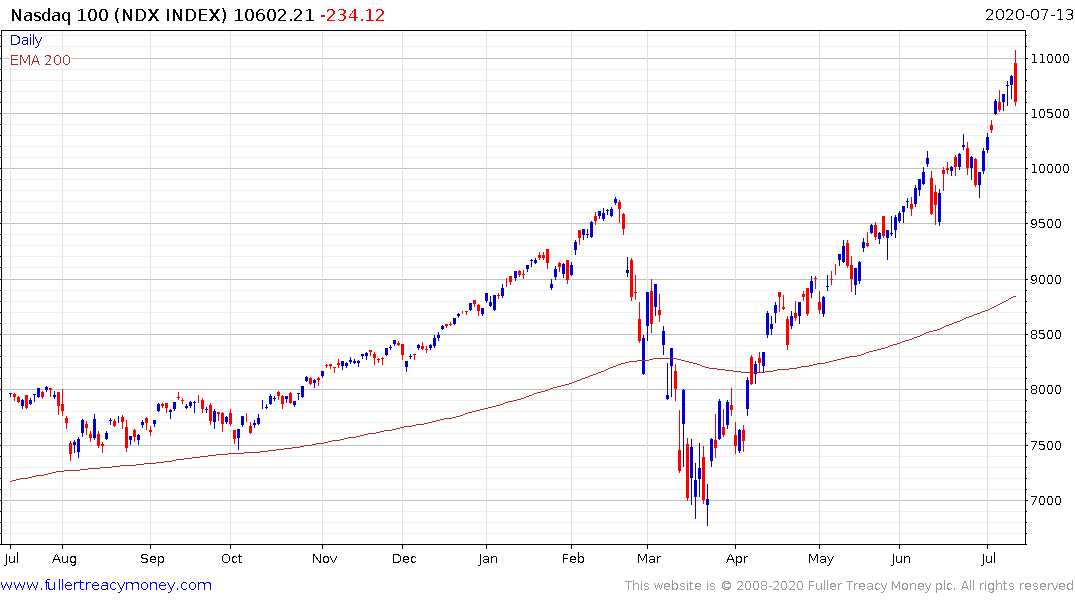 The Nasdaq-100 and a number of its primary constituents posted downside key day reversals today. They mark peaks of at least near-term significance. 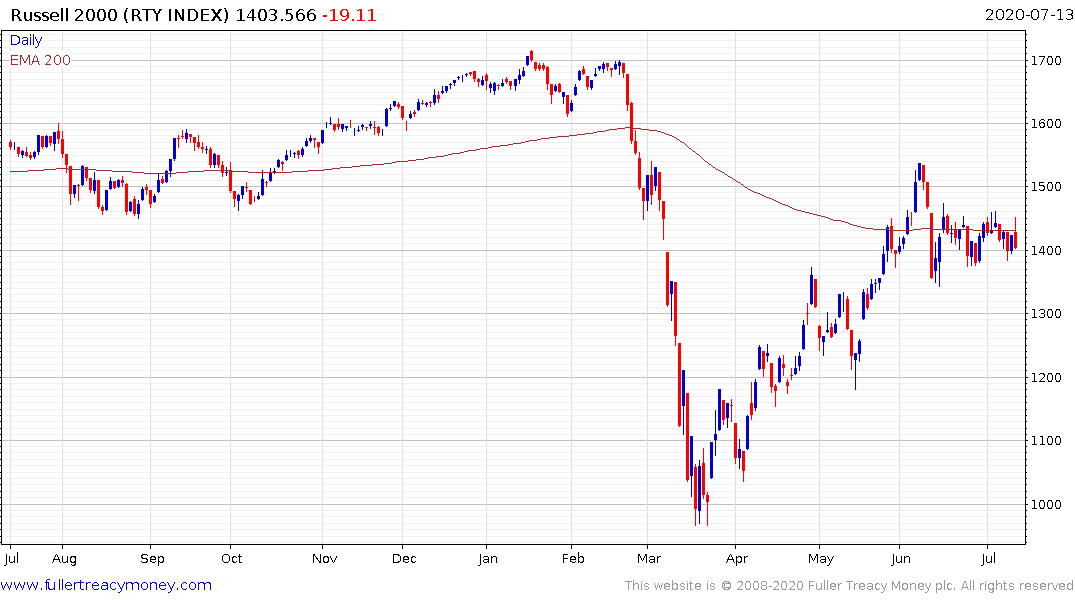 The Russell 2000 has been ranging below the 200-day MA since early June and failed to push up out of its range today. 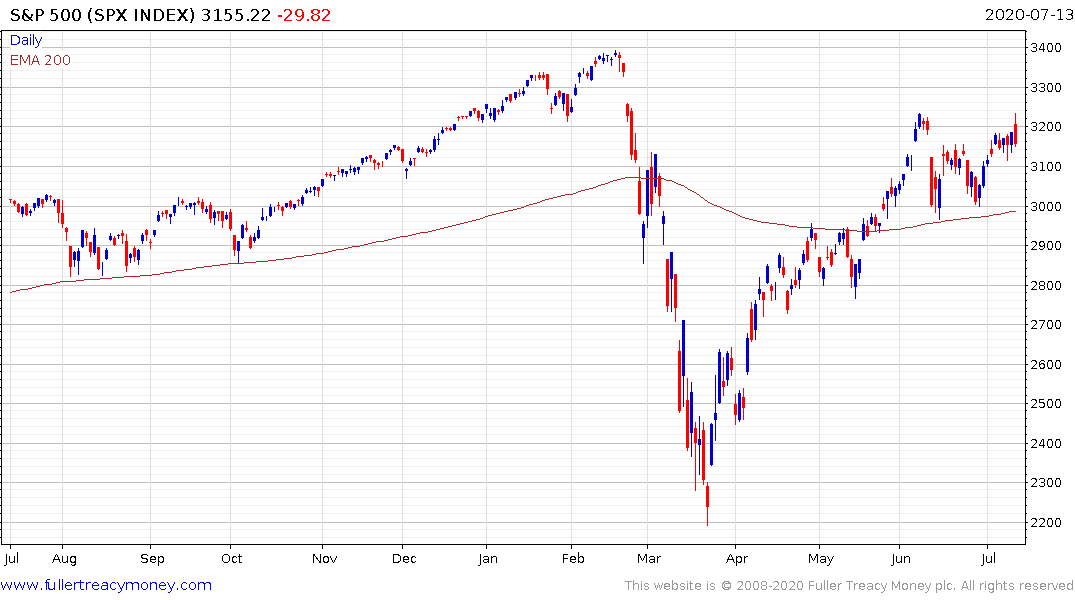 The S&P500 has been consolidating above its 200-day MA and failed to hold a move to new recovery highs today.