Own an Android? You Might Not Get That Loan by Eoin Treacy

Here are some of the other important variables mentioned in the Berg paper, based on the analysis of data collected by a German e-commerce company that sells furniture as it processed 270,399 purchases. (It ships the furniture first and gets paid later, so defaults are observable;  the annualized default rate is around 3 percent, roughly in line with the statistics for consumer loans issued by German banks and comparable with U.S. rates).

Those who shop between noon and 6 p.m. are half as likely to default as midnight to 6 a.m. buyers. Businesses can also expect more trouble from those who make an error when typing in their email address or put in their name and address in all lowercase letters.

These findings seem intuitive. People with regular habits and better self-control are relatively more reliable than those who lack those qualities. People who pay for services (and expensive devices) are likely more affluent than people who don’t. According to the Berg paper, the model based on these parameters -- the most rudimentary data we provide to any site on which we have to register -- is slightly more predictive of default than the German equivalent of a FICO score. A model that uses both the digital footprint and the credit score is even more predictive.

There are, however, multiple problems with this kind of modeling, even apart from the widespread worry that black-box scoring algorithms could end up making decisions on the basis of race, gender or other equally sensitive variables.

Consider this hypothetical case: I’ve paid out two mortgages and never defaulted on a loan. But not only do I own a cheap Android device, I also give e- commerce sites a free email address with numbers in it, so they don’t spam my main address. Making matters worse, I often make purchases late at night because I’m too busy to surf shopping sites during the working day. I’m a fat-fingered typist. And I use shopping comparison sites to find the best price. This pretty much rings all the default bells in the Berg model; I’m clearly not the only person with a high credit rating who does: The Berg paper says the model’s results are weakly correlated with credit scores.

Big Data is going to be used to make decisions on our credit scores. I think it is a given considering the pace with which artificial intelligence systems are being implemented in large data sets. It doesn’t have to be an either/or situation particularly because there is a statistical difference between loose correlations and hard correlations.

However, if two people have ostensibly got the same credit score how would one choose between them? That is where this type of analysis becomes valuable.

Alternatively, it would be useful for someone who is trying to repair their credit following a job loss or unsuccessful business venture to be able to use unconventional methods to improve the way they are viewed by algorithms. 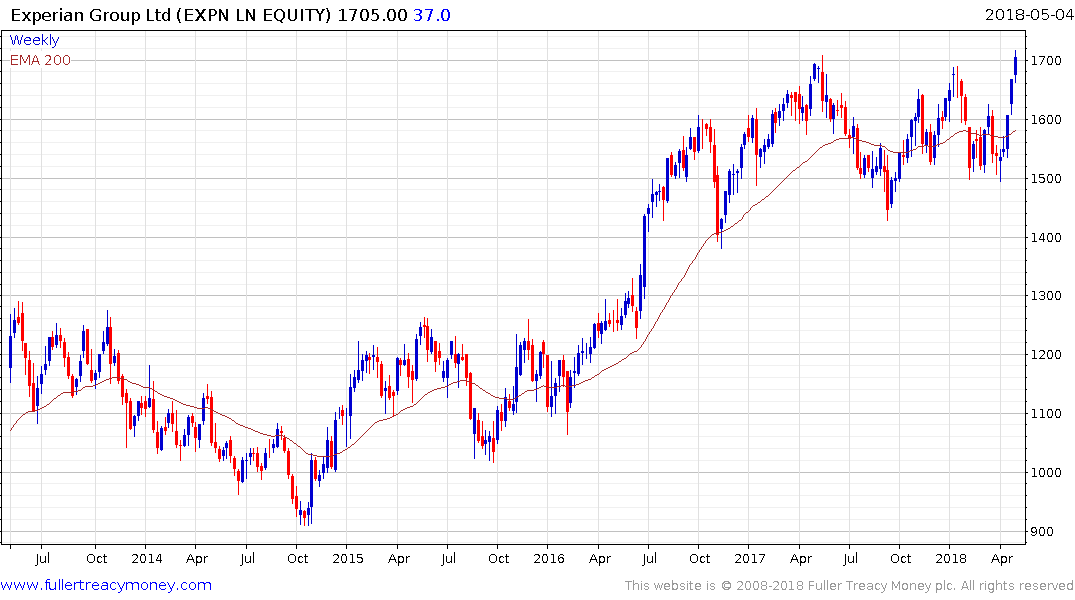 Experian is the world’s largest consumer credit scoring company. The share has been largely rangebound since early 2017 but hit a new all-time high yesterday and a clear downward dynamic would be required to question potential for additional upside. 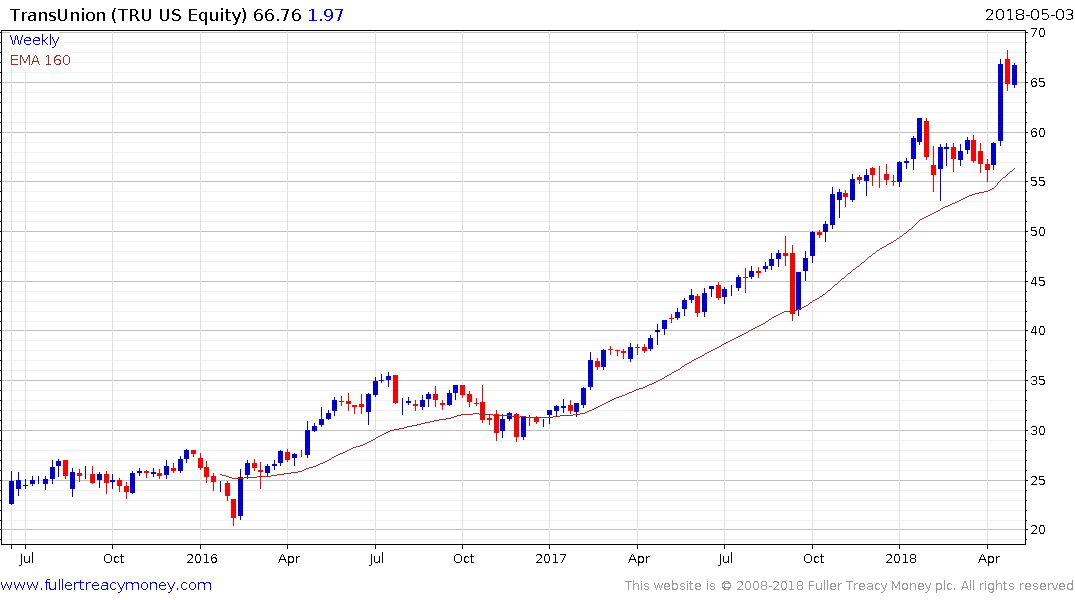 Transunion remains in a consistent medium-term uptrend and, while somewhat overextended in the short-term, a sustained move below the trend mean would be required to question medium-term scope for continued upside. 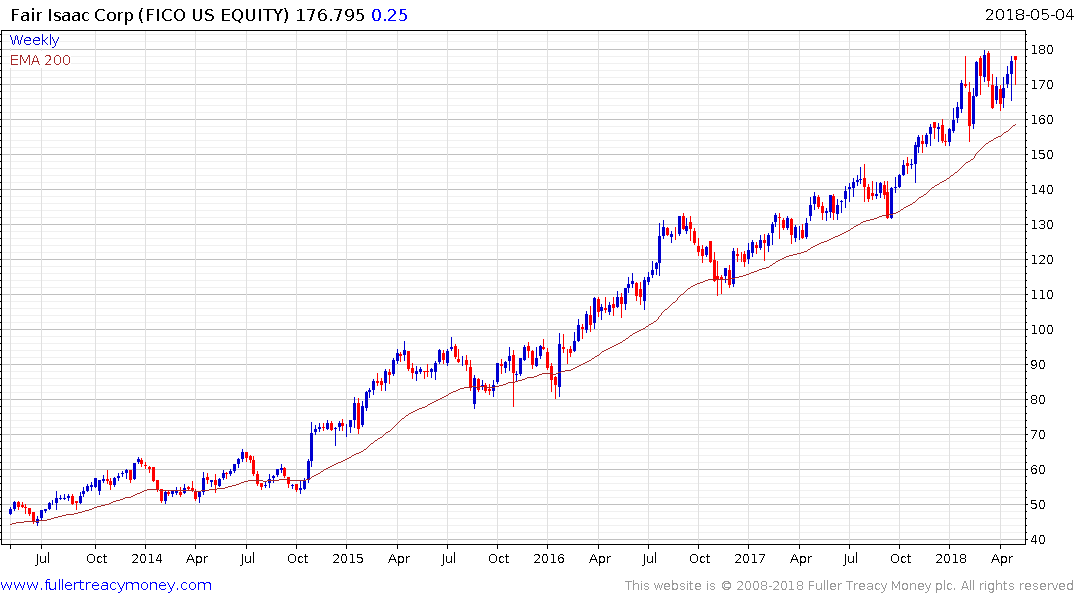 Fair Isaac remains in a steep medium-term uptrend and a sustained move below the trend mean would be the minimum required to question the consistency of the advance. 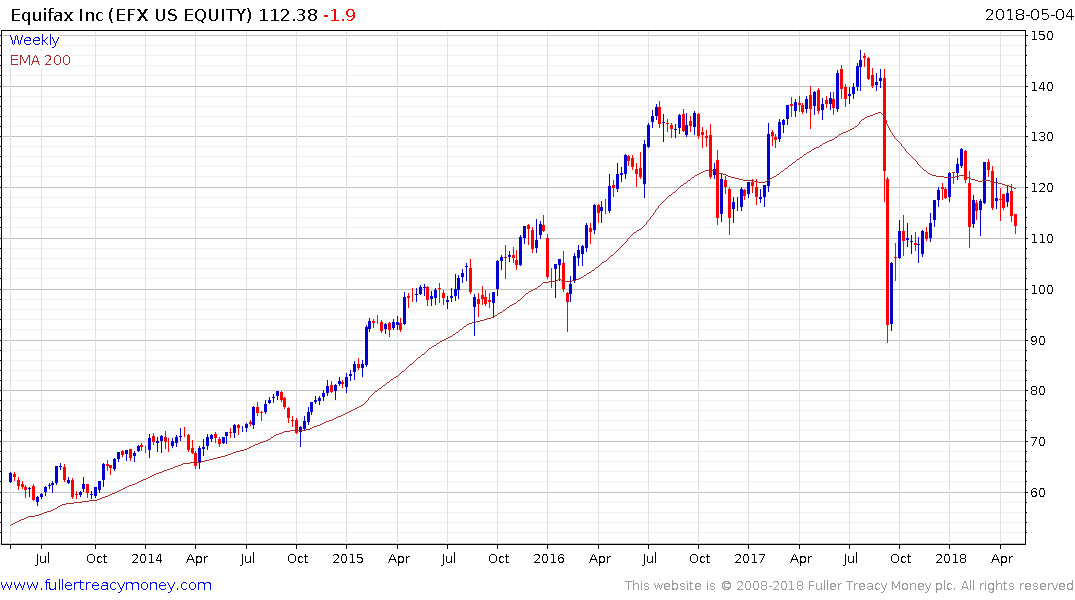 Equifax pulled back very sharply in September following its data breech and remains in convalescence mode. The share needs to sustain a move above the trend mean to signal a return to demand dominance beyond short-term steadying.