Our 2021 Global Outlook by Eoin Treacy

As an example, Mexico is a country that experienced the full brunt of a declining economy and retraction of liquidity and did not offset the decline in the economy with fiscal stimulation or the printing of money. Their spending, income, and imports collapsed, and their fiscal and monetary balance sheets remained largely unchanged. As a result, their current account moved into big surplus at the same time that their currency and asset prices fell. Thus, their exchange rate and asset pricing are now implicitly discounting a continuation of the extreme flows that shaped them and the collapsed levels of income and spending that are consistent with those flows. Anything in the direction of a normalization of money and credit flows would produce an economic scenario much better than what is discounted and at the same time would relieve the liquidity squeeze that formed the current set of prices.

These sorts of imbalances are leading to some of the largest opportunities we have seen in our decades of managing money. The number of markets where our signals (which represent the conviction of our views across markets) are near their maximums is large. Across a number of countries, the combination of prior currency declines, equity declines, and rising interest rate differentials has made their discounted future cash flows in USD terms very cheap (i.e., their unhedged assets). In the developed world, Japanese stocks unhedged in USD terms are as undervalued as we’ve seen in decades. In the emerging world, Brazil is an example with similar dynamics to Mexico. And behind a lot of what is going on, you have the record amount of dollars and dollar debt being created relative to the long-term demand to hold dollars. Currency exposure is going to be a big deal.

My view - The team at Bridgewater have clearly concluded that China will succeed in its efforts to supplant the USA as the world’s largest economy and supplier of the world’s reserve currency. They represent an example of the migration of capital away from countries most intent on devaluing their currencies. The other way of thinking about that is emerging markets do best when they have the currency, yield and stock market trend on their side.

Commodity-led bull markets tend to also favour emerging markets. If we are now seeing a secular transition to commodity outperformance and relative strength in countries with positive current account balances then the corollary is that Wall Street should range more than trend. There is no evidence of that latter condition at present because prices continue to be supported by waves of fresh liquidity.

An alternative interpretation is currency devaluation will support nominal but not real asset prices. For example, the Dollar’s downtrend has contributed almost 30% to the S&P500’s performance over the last 12 months. 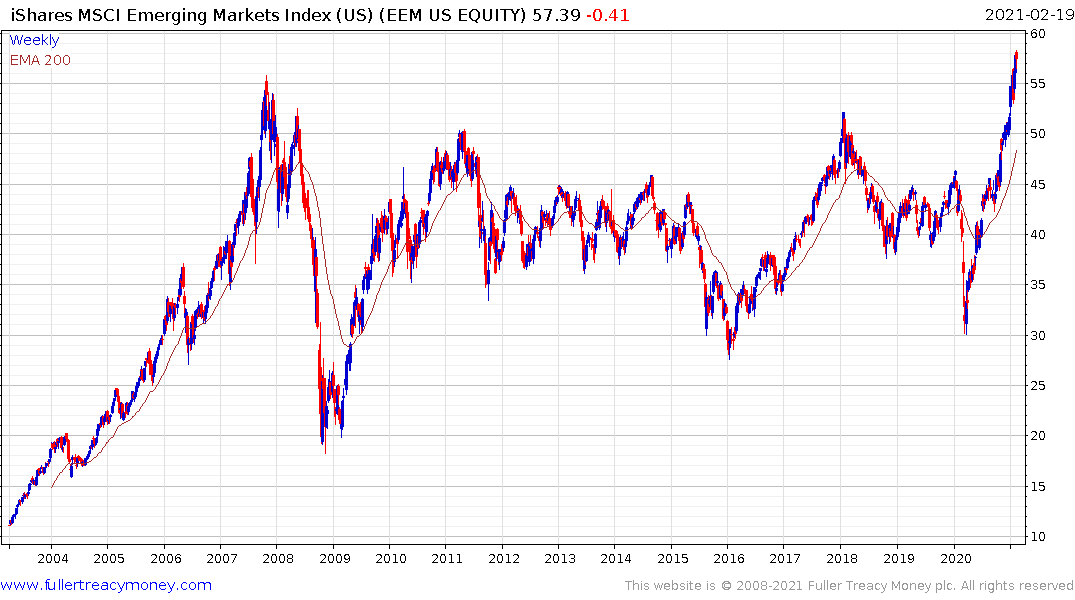 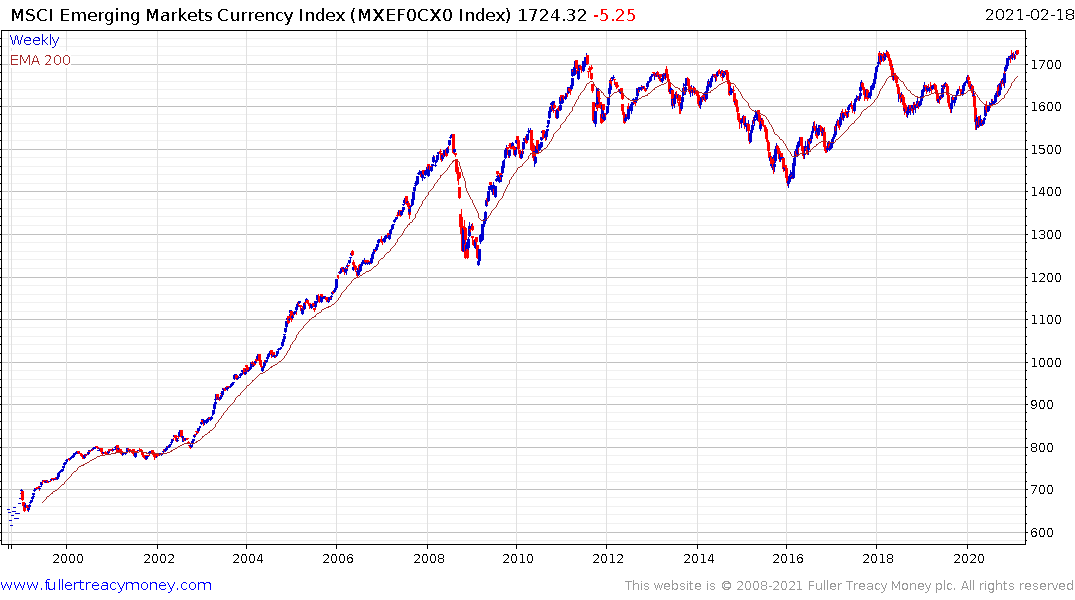 The MSCI Emerging Markets Currency Index is also testing the upper side of a lengthy range.

All of the commodity currency ETFs I am aware of have been closed but the Morningstar Commodity Currency Total Return Index is still active. It has been ranging for a decade and is now trending back up towards the upper boundary. 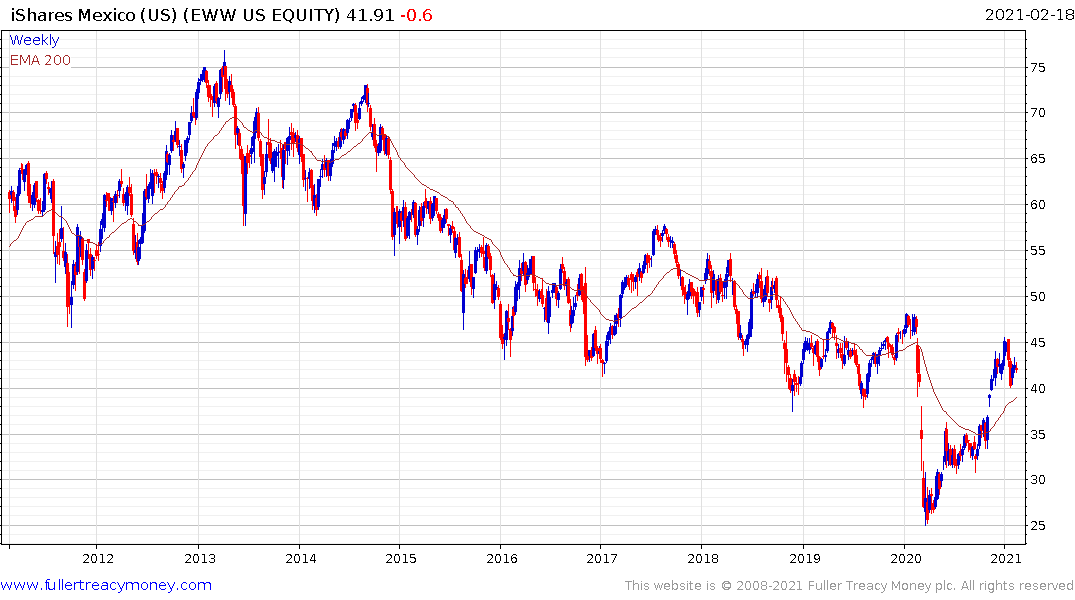 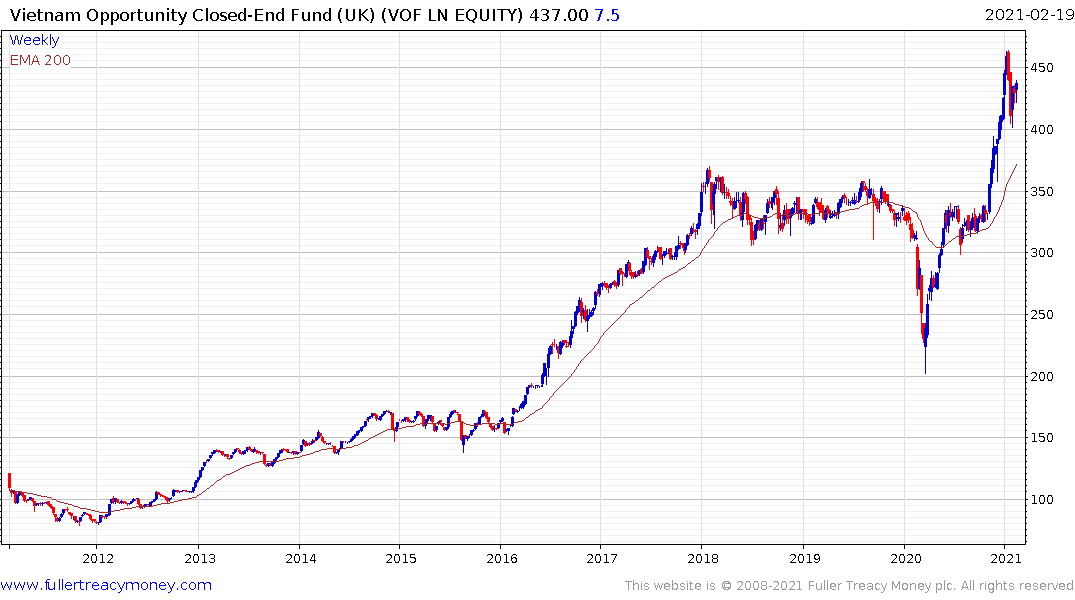 The Vietnam Opportunities Fund rebounded impressively. It is currently consolidating in line with the country index. 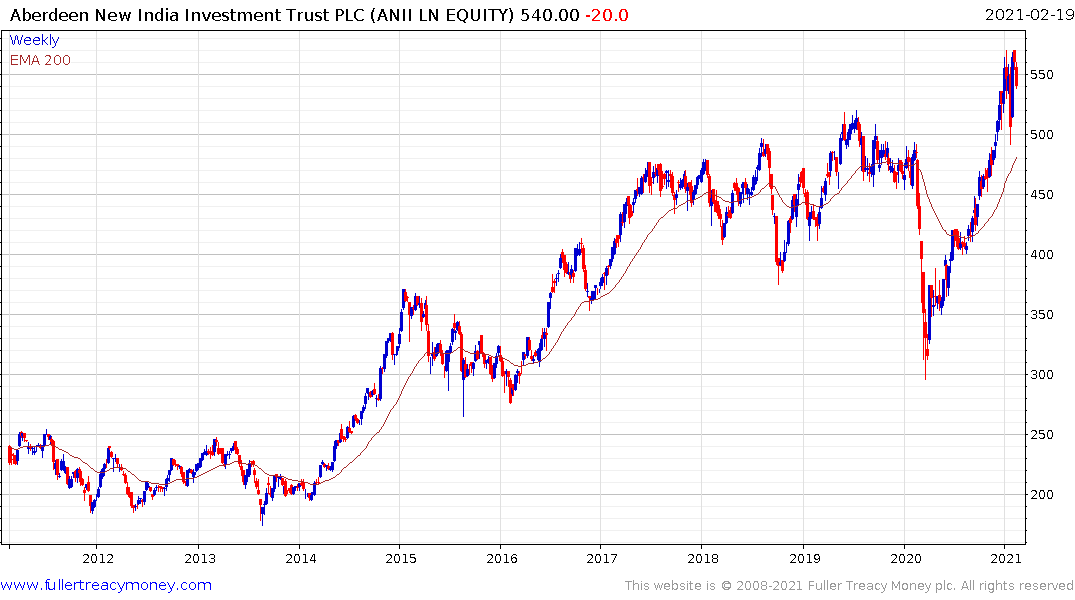 It’s hard to imagine how India will not come out of the pandemic is a stronger position. The Aberdeen India Opportunities Trust continues to hold its breakout to new all-time highs.