Bitcoin could slide even lower before finding support, according to crypto billionaire Mike Novogratz.
The chief executive officer and founder of Galaxy Digital Holdings told CNBC that the digital asset could find a bottom at the $38,000-$40,000 level. That prediction is more bearish than just a few weeks ago, when he said Bitcoin could hold at about $42,000.

‘Goes to Hell’
Novogratz told CNBC that crypto’s latest move down has been on low volume, adding that there is a “tremendous amount of institutional demand on the sidelines.” He himself hasn’t lost his enthusiasm for digital assets -- he got a tattoo inspired by the coin Terra ($LUNA) just a few days ago, after having gotten a Bitcoin one in December 2020.

I’m officially a Lunatic!!! Thanks @stablekwon And thank you my friends at Smith Street Tattoos.
Sent via Twitter for iPhone.

The market’s going to be volatile over the next few weeks, but he isn’t nervous in the medium term about the cryptocurrency, Novogratz told CNBC. Part of the bullish story around Bitcoin was the debasement of fiat currencies, and as the U.S. Federal Reserve becomes hawkish, “some of it comes off,” the long-time crypto bull said.

Additionally, Bitcoin is still correlated to the Nasdaq which has come off from the highest levels, Novogratz said. Minutes from the Fed’s December meeting showed officials’ increasing preference for a faster path of rate hikes and a shrinking of the bank’s $8.8 trillion balance sheet. Speculation about tighter monetary policy has taken the shine off risk assets like crypto and richly valued technology stocks in recent days, dragging down the Nasdaq 100 index.

Bitcoin is a risk asset. The reason people buy it is because they want quick returns. There are lots of other arguments about its position as a store of value or the value of its network and the future of digital payments. All those arguments can be weighed on their individual merits, but it does not escape the fact that almost everyone I talk to is primarily interested in making quick money.

Just like in any power trend, investors are conditioned to buy the dips. Sometimes bitcoin dips by 80 to 90% and multiplies subsequently. The fact no one who has held for four years has ever lost money is a comfort to anyone who wants to buy the dip. They have evidence it has always come good in the end.

The one thing that is at the back of my mind is bitcoin was the worst performing asset in the world during the last era of quantitative tightening. It traded lower for almost all of 2018 and only bottomed when the Fed stopped raising rates in December of that year. If the Fed is serious about initiating balance sheet runoff shortly after the first interest rate hike, that’s not good news for liquidity magnets like Bitcoin. 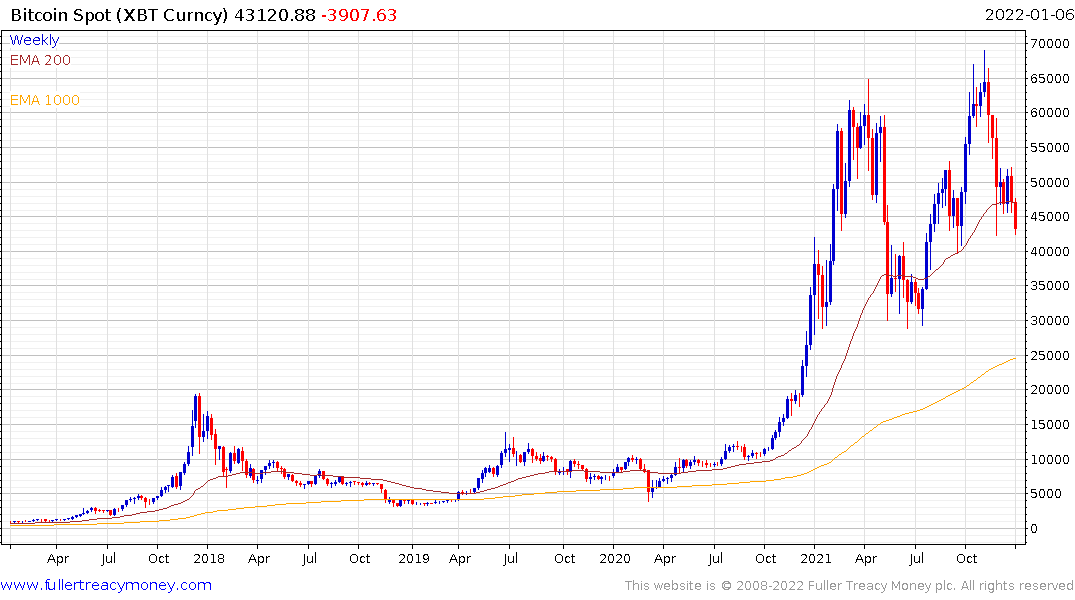 The 1000-day MA currently coincides with the $25,000 level. A sustained move below that area would cast considerable shade on the secular bull market hypothesis.