Machine learning is everywhere
“Machine learning” repeatedly appears in the news, from the game of go to autonomous cars: what can those algorithms do for us in finance?

Supervised learning and its pitfalls in finance
In this first report in the series, we focus on supervised learning and note that while machine learning is very relevant to us, there are dangerous pitfalls, sometimes specific to the type of data we deal with. In particular, we examine penalized regression (lasso and elastic net), decision trees, and boosting – we also mention, in passing, support vector machines and random forests.

Application to the Japanese equity market
To make things more concrete, we try to use those algorithms to combine the investment factors in our database in order to build a stock ranking system for the Japanese market; this shows the limitations and pitfalls of traditional machine learning practices in finance.

Long Term Capital Management represented something of a genesis for quantitative strategies and their sophistication has been enhanced considerably since. The pace of adoption has accelerated in the last few years as the breadth of data from both conventional and unconventional sources has increased at an exponential rate and companies like Google and Baidu have demonstrated in real terms what is possible with these tools.

A race is now on to develop quantitative strategies within the investment community not least because it is the newest ‘cool’ sector that can be sold to customers demanding greater sophistication. As the above report focusing on Japan highlights this is a global phenomenon. However, as the report also highlights some human oversight of systems will be required for quite some time as glitches are worked through and nuances of calculating the vicissitudes of a global emotionally charged crowd is no simple matter. 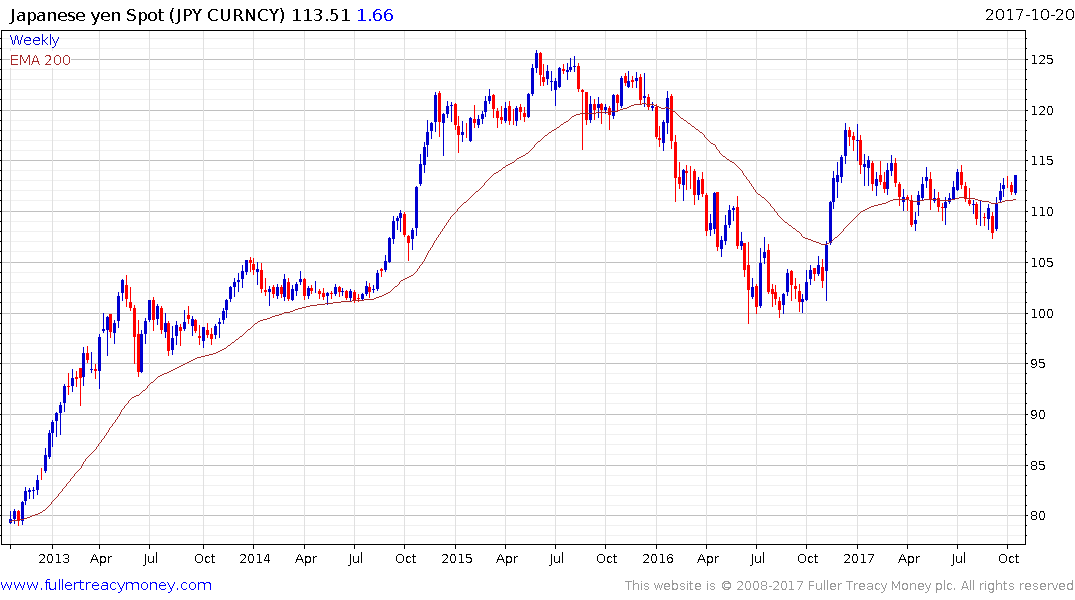 The Yen weakened today ahead of the election at the weekend where Abe’s ambition of changing the pacifist constitution may receive some push back from the electorate. A sustained move above ¥115 for the Dollar would signal a return to demand dominance and act as more than a temporary tailwind to the stock market. 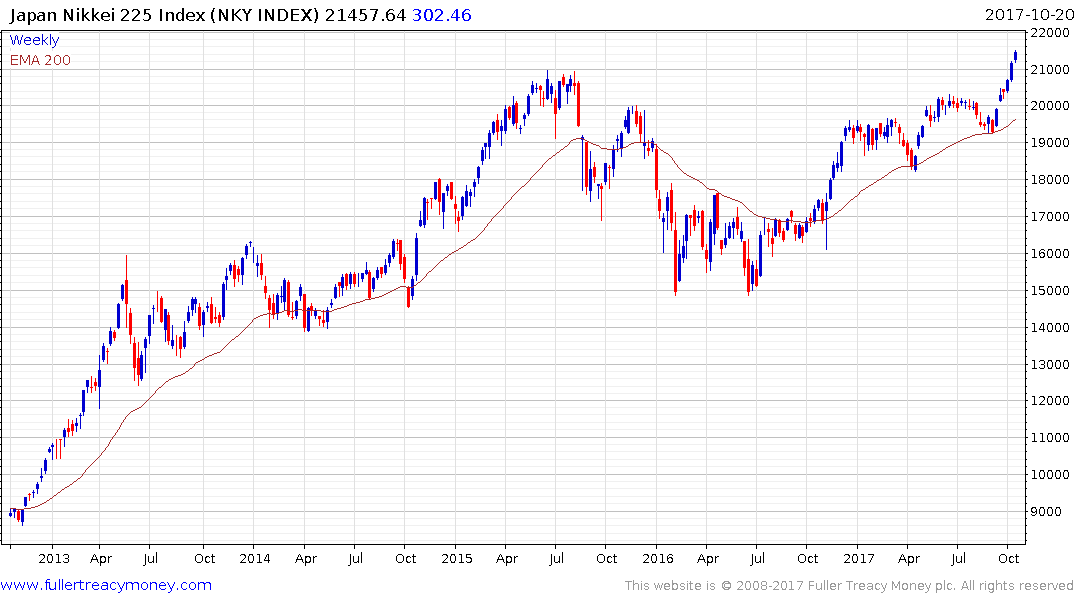 The Nikkei-225 has rallied impressively since September and a short-term overbought condition is increasingly evident. Some consolidation is possible following the election but a sustained move below the trend mean would be required to question medium-term scope for additional upside. 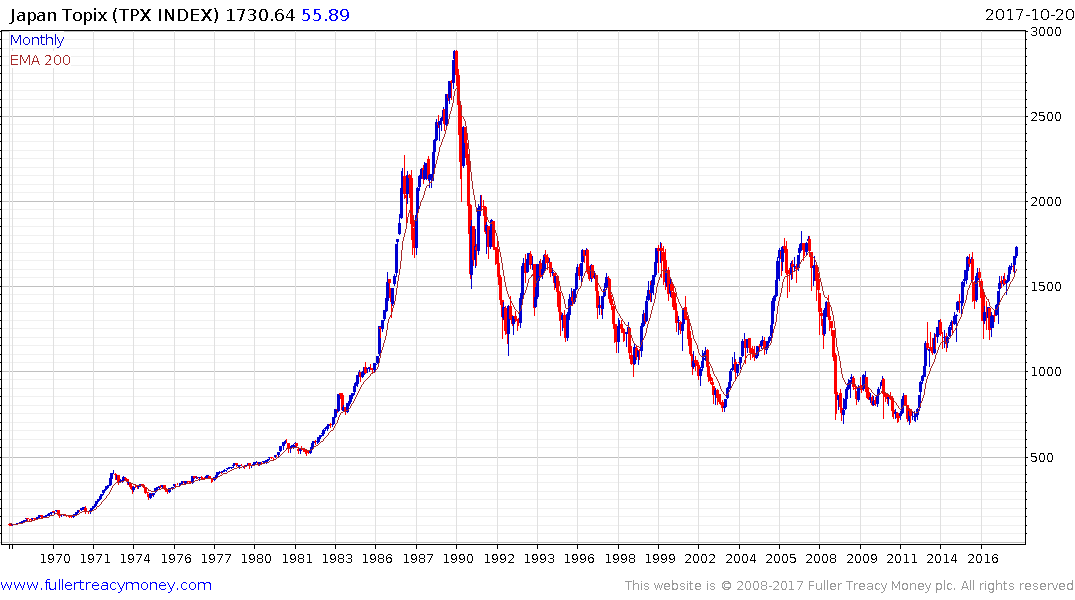 The Topix Index has been ranging mostly below 1750 since 1992 and has rallied this month to retest that level. Some consolidation is looking increasingly likely but a sustained move below the trend mean would be required to question potential for long-term base formation completion. The potential for Japan to break free from a decades- long secular bear market is something I do not believe has been appreciated by international investors. 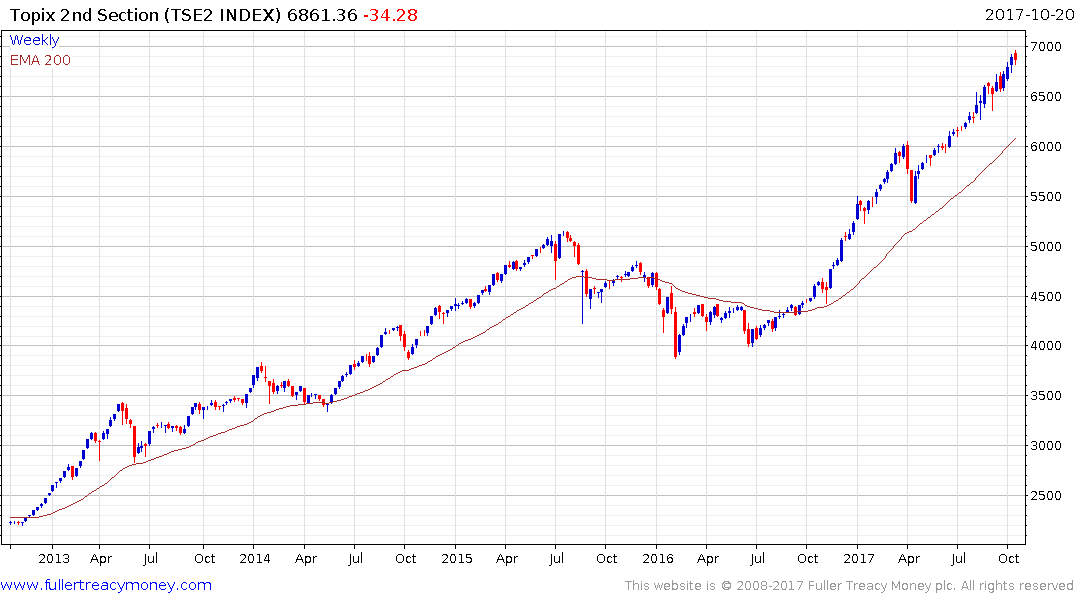 The Topix 2nd Section Index of small caps has paused at big round numbers on successive occasions over the last few years. It is now testing the 7000 level, following an impressive rally and if it holds true to form a pause is likely.