Lennar Corp. soared after the homebuilder said it will create a spinoff with at least $3 billion in assets.

The new company, which will have $3 to $5 billion in assets and no debt, will include Lennar’s technology investments, according to an earnings call Wednesday.

Lennar, which said it made about $470 million on its investment in Opendoor Technologies Inc., jumped as much as 9.5% to $97.09 in New York. The stock had gained 16% this year through Tuesday’s close.

Miami-based Lennar reported orders on Tuesday that beat estimates as it benefited from the pandemic housing market. It got also a boost from Opendoor, which began trading in December.

Lennar said two other “technology-driven” companies it has invested in also have announced agreements to go public through mergers with special purpose acquisition corporations, or SPACs.

It is a clear sign of the times that a home builder, which is about as brick and mortar as it gets, has upwards of $5 billion in technology investments. It’s good news that the company has made wise decisions in what are now highly valued digital assets. However, that decision to prioritise risk in non-core businesses is also a symptom of the wider lack of building new homes that has been a feature of the recovery from the 2007-12 housing recession. 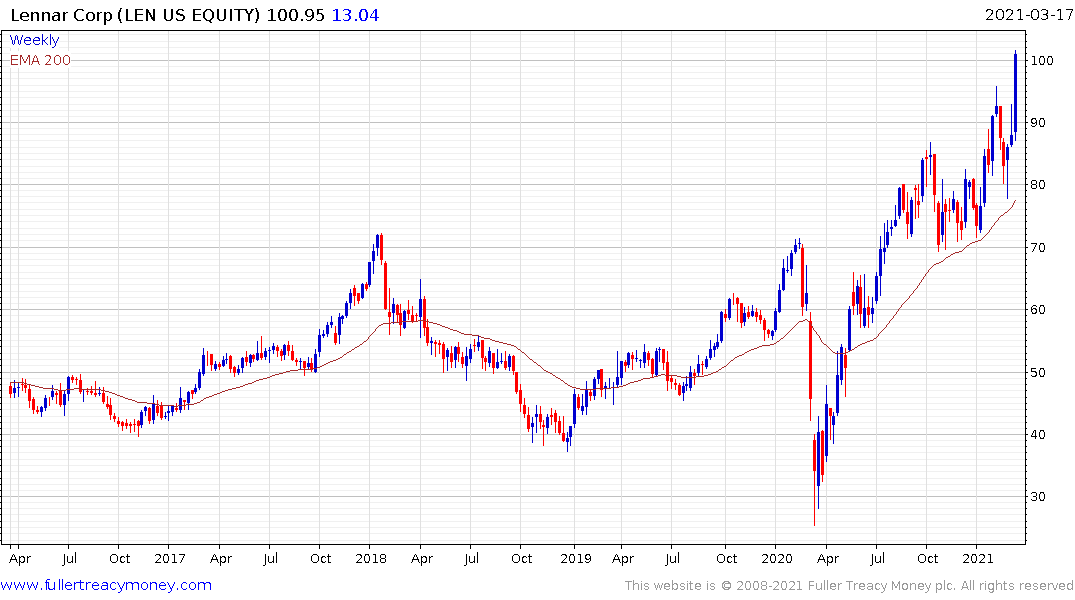 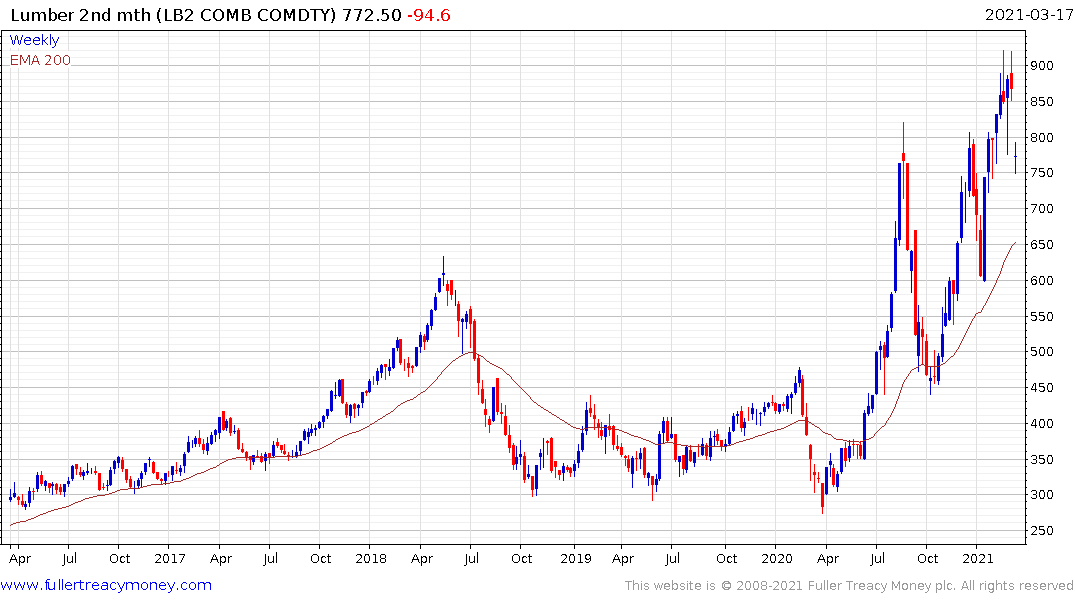 Lumber prices remain steady around the $800 level. The price shot higher during the pandemic as logging ground to a halt even as construction was exempted from lockdowns. With prices testing the psychological $1000 there will inevitably be a supply response. The big question therefore is how quickly will homebuilding restart in earnest?

The Global Financial Crisis has been the fall-back fear for everyone until the pandemic. I think about how risk has been framed since 2009. The most common objection is “yes, but what about a global liquidity/solvency crisis”. As we pull away from the pandemic, the emotional fallback will be to that event.

The whole world stopped. On aggregate household balance sheets came out the other end in better shape than they went in. Obviously, there is a significant minority who suffered mightily, and policy is being pitched to assist that demographic. Housing prices in Canada, Australia, New Zealand, the USA, Germany, and the UK raced higher in 2020 in part because many consumers were flush with cash.

Bond yields are rising everywhere and that may already be cooling demand for housing, with some evidence of new mortgage applications moderating over the last month. However, the availability of credit is still reasonably responsible. Banks are still cautious about lending. Demands for 20% deposits in the USA are still de rigeur. At the top of the property cycle it is availability of credit and leverage which drives prices higher rather than interest rates. 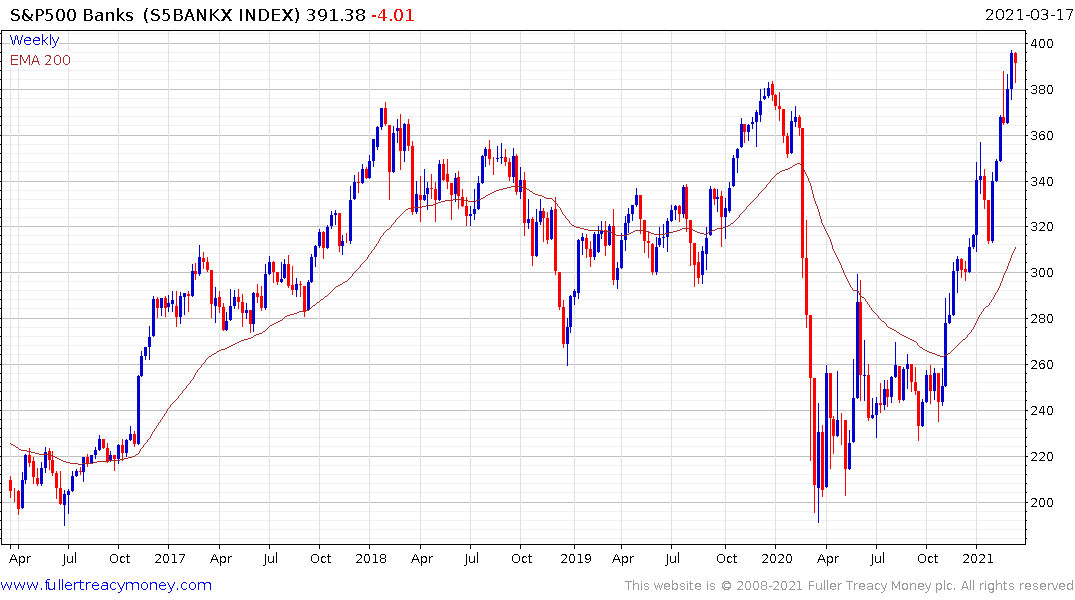 Bank sector indices are only now breaking higher. At the top of a credit leverage cycle, they are generally among the best performing shares. At the top of the cycle there are cranes everywhere and speculation on apartments is running rampant.

The availability of affordable housing is one of the primary election issues for the Millennial generation. That suggests there will be a supply response. That will require looser regulation of bank lending and leverage standards, more building and first home buyer incentives. That’s a reflection of how cyclical banking regulation is.

The potential for banks to see a further extension of the exemption on limits on reserves is looking likely as fiscal stimulus boosts deposits. Meanwhile the next step will be direct incentives to encourage them to lend to ease the housing shortfall. 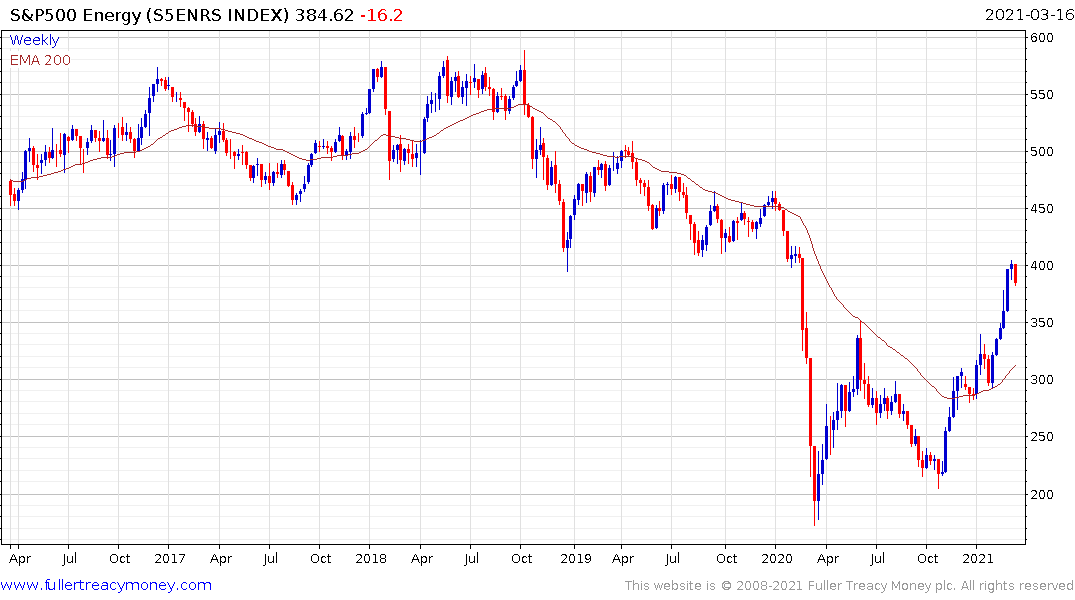 A lot of money has poured in the energy sector of late because it is considered value. However, the regulatory burden on the sector is only likely to increase. The financial sector is equally cyclical and has the potential to see its regulatory burden diminish as government priorities evolve.