Investment Strategy by Jeffrey Saut
Comment of the Day

Since meeting him, Leon and I have exchanged many letters, reports, thoughts, conversations, etc. I received this one from him last week:

Hi, Jeffrey,
I calculate a three week moving average of the Bullish sentiment. Currently, it is abnormally low and [that’s] very bullish. Although long retired, many fund managers in Europe, Asia, and North America still call me and seek my view of the market. I can report to you that worldwide, investors are skeptical and fearful. Most are sitting on a mountain of cash. As you know, that is very bullish. My view remains that this great bull market is only in the early stages of the second leg. The first leg was from October 10, 2008 and ended in May, 2015 which was driven by an easy/accommodative monetary policy. The second leg started in February, 2016 which is always the longest and strongest as it is driven by improving economic conditions (due to the monetary stimulation of the past eight years) and accelerating earnings momentum which is what investors are seeing. As you know, since early last year, I’ve been of the view that investors are witnessing the biggest bull market on record and the end is nowhere near in sight. Also, I felt that when this bull market ends, it will be the wildest and wooliest speculative “blow-off” in history. There has never been so much liquidity created as in this cycle. Also, in my 55 years in this business, from a chart standpoint, I have never seen so many humongous bottoms in so many different industries as in this cycle. Many are 15 years and longer. In the 50s, it was mostly in anything electric/electronic and in the 90s, it was mostly high tech. In this cycle, except for the resource sectors, big bottoms are found everywhere. One of technical prerequisites for a long, sustained bull market is that many stocks must trace and break out of long bases. Putting my money where my mouth is, I own a few of the small and micro caps in the Biotech/Health Care area.

The news headlines are awash today with news that the best performing ETF this year is the short VIX Index XIV. This is one of the least volatile periods in the market since the 1990s and has delivered a very consistent chart pattern for the S&P500 which has been trending in a step sequence staircase manner since early January. 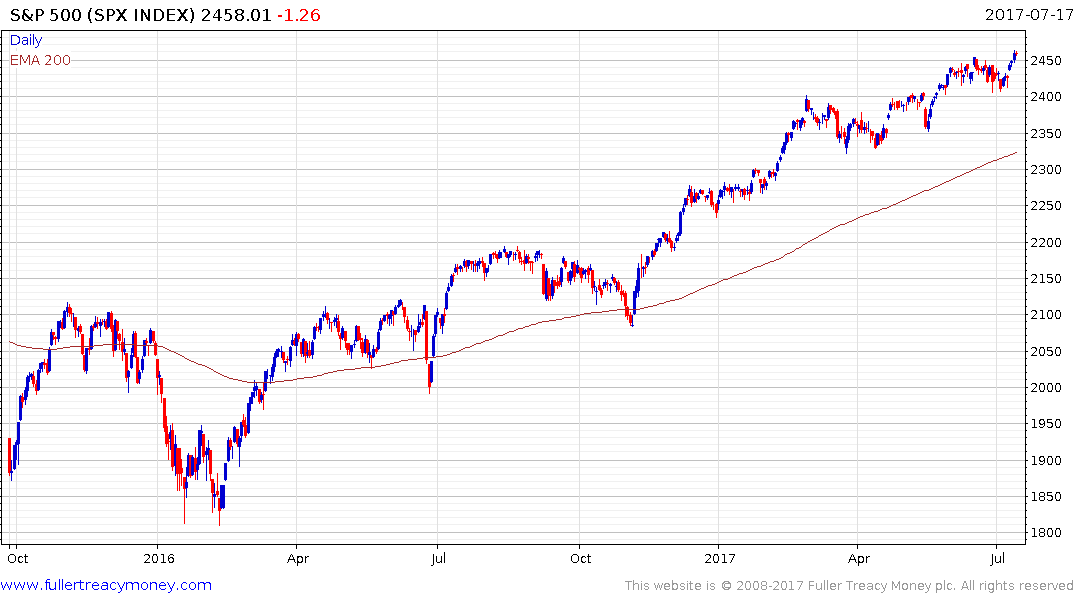 Reactions of about 50 points have been the norm this year with one in the order of about 80 points while reactions of 100 points were “normal” last year. Shallower reactions as a trend matures are indicative of a widening imbalance between supply and demand. Since April 2016, the Index has paused near round numbers such as 2100, 2200, 2300 and 2400 so it is logical that provided the current breakout is sustained the next pause should be near 2500.  A break in that sequence would be required to question the current demand dominated environment.

Taking a broader perspective, with the exception of the Nasdaq-100, just about every Wall Street Index broke out last week. The S&P500 might have completed a long-term range in 2012 but an increasing number of global markets are now following suit. The FTSE-100, India, Indonesia, Vietnam, Taiwan and South Korea all broke out of lengthy ranges this year. Within ASEAN, Thailand and the Philippines are testing the upper side of multi-year ranges.

The Dow/gold ratio has hit fresh peaks at the climax of every secular bull market on Wall Street since 1929 and it posted an important low in 2011. It is reasonable to conclude that marked the beginning of a secular outperformance for stocks versus gold/commodities. No secular, as in very long-term bull market, goes up in a straight line but the number of indices making new highs is certainly encouraging night now.