Infinite QE Was Always Unsaid by Fed. Until Now
Comment of the Day

Infinite QE Was Always Unsaid by Fed. Until Now by Eoin Treacy

Quarles is clearly uncomfortable with that kind of framing, judging by his need to interject that the Fed’s bond buying should be seen “not as a way of supporting the issuance of Treasuries, but as a way of supporting a functioning market in Treasuries.” But as much as he tries to draw a distinction, those two things are effectively one and the same. As I wrote last week, Fed Chair Jerome Powell and his colleagues could be much more forceful on the need for more fiscal spending if they wanted. All they would have to do is pledge to increase their monthly purchases of Treasuries in line with certain policy initiatives, such as extra unemployment benefits or funding for state and local governments. But that would give away the game, which is why they consistently describe their bond buying in terms like “market functioning.”

Quarles also took the rare step of walking back his remarks, saying at an event less than 24 hours later that “I wouldn’t want the comments that I made today about thinking about Treasury market structure to suggest that I think that there’s some need for some permanent backstop of the Treasury market in normal times.”

It’s hard to not interpret them in that way, but leaving that aside, I’d be curious what “normal times” means to Quarles and other Fed officials. There’s little doubt that its Treasury purchases — or even just the threat of ramping them up — helps to keep benchmark yields right about where the central bank wants them. And the Fed considers rock-bottom long-term borrowing costs as a complement to keeping the fed funds rate near zero to boost the economy. So is normal when the central bank is raising interest rates again? That, in turn, would mean U.S. inflation “has risen to 2% and is on track to moderately exceed 2% for some time,” per its new framework. That could be quite a while, indeed.

Unprecedented has the been the most overused word in 2020. However, the sheer scale of the changes that have taken place makes the current set of monetary and fiscal conditions unsuitable for direct historical comparison. In order to truly comprehend the breadth of the challenge we need to have some very long-term historical perspective.

I find the talk of raising rates to be rather odd. How can any massive indebted country raise rates? The impact that would have on the interest expense of rolling over the existing debt is so prohibitive as to make the prospect impossible. 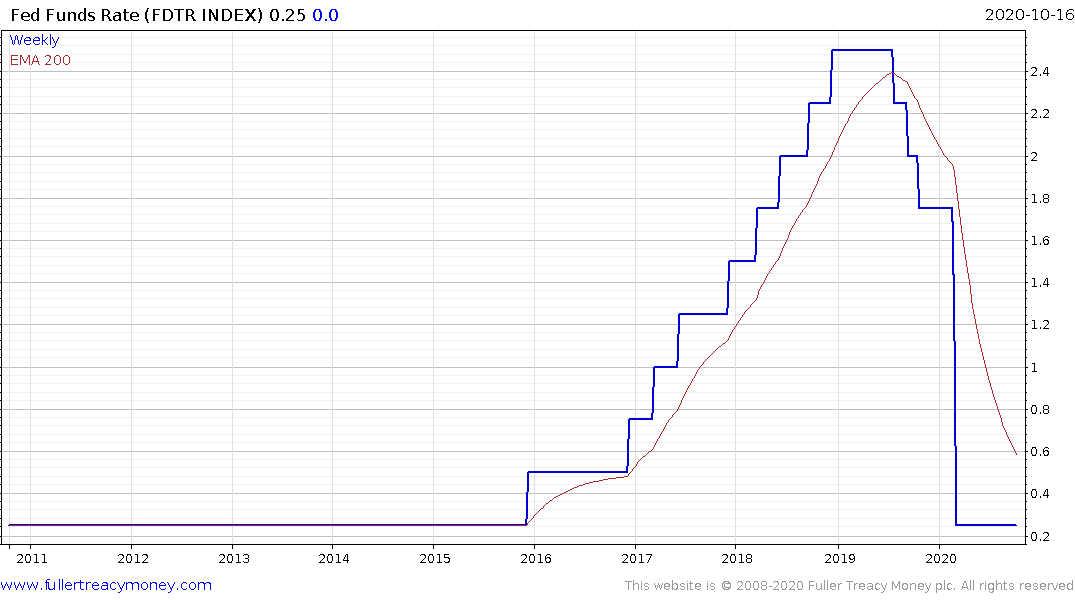 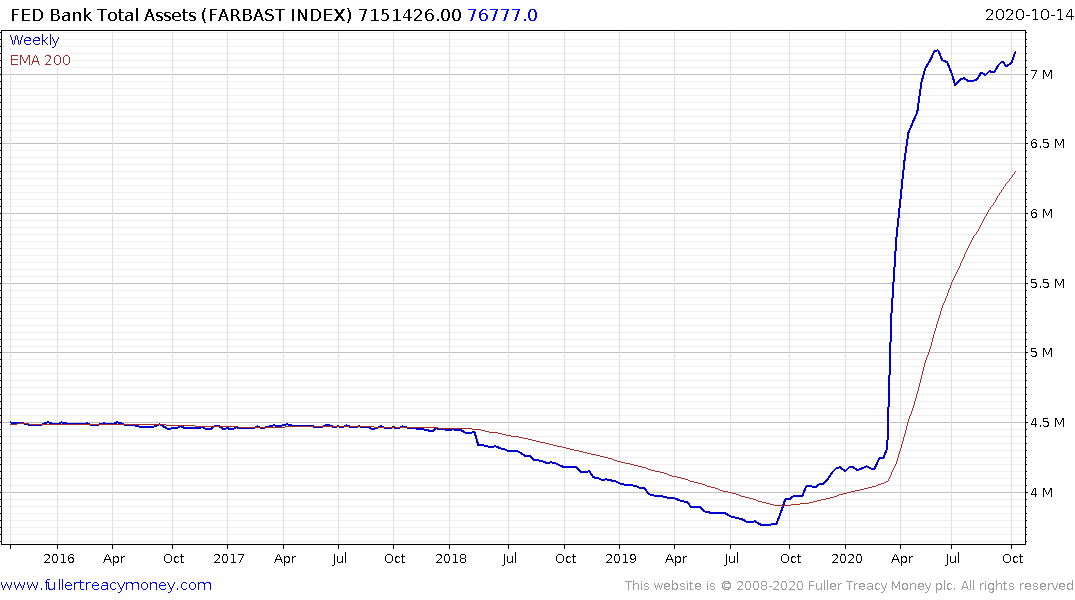 The Federal Reserve raised rates by 225-basis points between the end of 2015 and 2018. It simultaneously siphoned $750 billion from its balance sheet. Those actions were taken in the conventional belief that massive fiscal stimulus would be potentially inflationary so the prudent action was to begin to withdraw the punchbowl. The result was illiquidity in the high yield market, the yield curve inverted and shortly afterwards the repo market froze. That latter event resulted in a swift introduction of $450 billion to free up trading. It was reasonable to expect that the USA was on the cusp of a recession at the end of last year. Then the pandemic hit.

Interest rates collapsed, the fiscal deficit has exploded and the Federal Reserve has basically said they have given up trying to forecast inflation. We are now in a de fact era of combined monetary and fiscal stimulus. The Federal reserve will buy the bonds required to fund the deficit and that shortfall is going to remain at extraordinarily wide levels is the current plans for additional stimulus are delivered as seems likely.

The challenge to the status quo is China. It has its own debt problem but also has outsized growth and a current account surplus. It is likely to be the first country to raise rates and the renminbi has broken its downtrend. Bond investors unhappy with receiving a paltry return in a depreciating currency therefore have the option to decamp to Chinese assets. 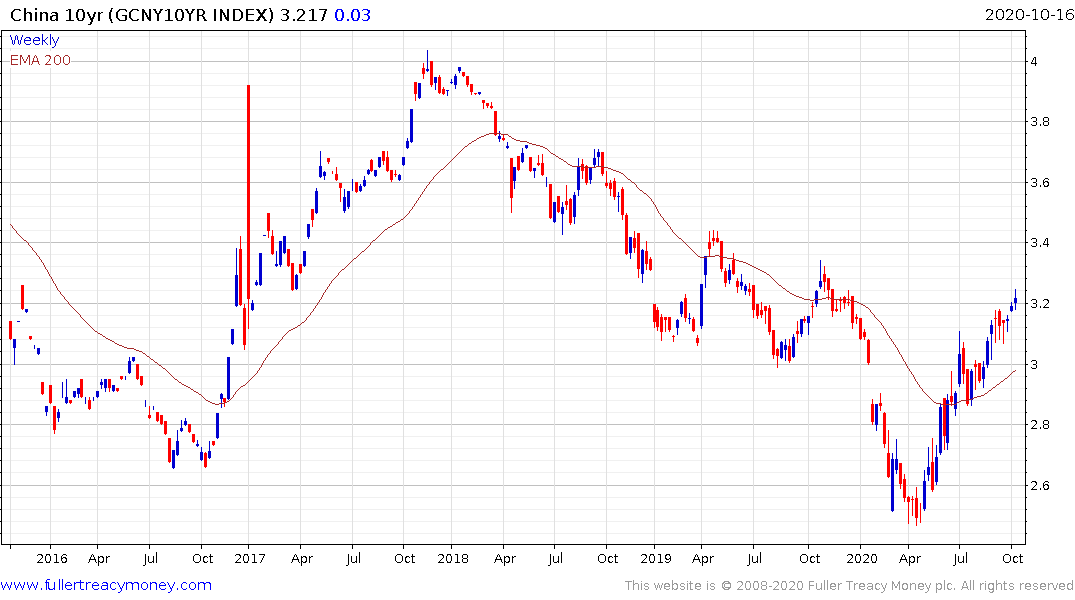 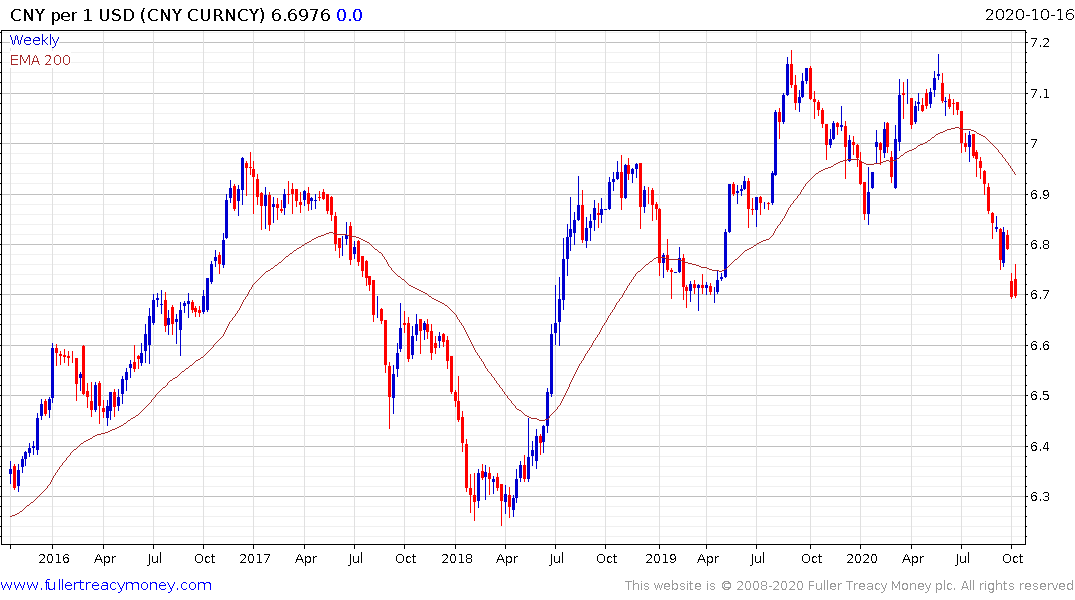 That is likely to introduce an urgency to Fed decisions on what to do about the Treasury market. The 30-year yield is now at 1.55% and testing the region of the trend mean. If yields are to be contained the central bank is going to have no choice but to become more active.

It remains quite likely they are waiting for some movement on the fiscal front from the negotiations between the Democrats and Republicans but the outlook remains for overt yield curve control regardless of what the Fed has said in the past. Its balance sheet is quite likely to increase by billions over the coming 12 months.

That represents the primary reason for a bullish outlook on gold. The efforts at outright currency devaluation are still in their infancy.

The social unrest of the late 1960s, the panic of global governments to try and spend their way out of the trouble and the acute unwillingness to do enough to rein in inflation until it was in double digits is what created the last big bull market.

On this occasion, the debt is much bigger and the threat from a competing power more credible. Therefore, that lends itself to a 1930s comparison.