Hao Jianyu, 26, who works at Google in Beijing and owns a Xiaomi phone, says he holds credit cards from China’s four biggest banks but prefers taking out loans from Xiaomi Finance to fund his daily spending. He says daily interest on what he borrows is 0.065%, an annualized rate of 23.4%. That’s higher than the interest rate on his credit cards, Mr. Hao says, but he has been able to increase his credit limit much faster with Xiaomi. The more often he uses Xiaomi’s short-term loans and repays on time, the bigger his credit line, which now exceeds the limits on his credit cards. He says his credit limit from Xiaomi has increased to 60,000 yuan from a few thousand yuan over two years.

In a stock-exchange filing last year before Xiaomi went public, the Beijing-headquartered company said its finance business had a “highly advanced and customized credit assessment and risk management approach” that was built on its big database of users. The company said its proprietary risk-assessment model is used to preapprove individuals for certain amounts of credit. Xiaomi said in reporting its results for the second quarter of this year that revenue from its fintech business grew 63% from a year earlier to 792 million yuan ($112 million) in the three months through June.

China is attempting to implement countercyclical monetary policy. There is a bubble in the housing market and 50 million homes are vacant. Their consumer sector, particularly younger upwardly mobile generations have taken to credit like just about all new consumers in other countries before them.

The number of new loan products available to anyone who wants them is proliferating and while the above article is careful to point out that short-term loans are paid back quickly, there is evidence from pawn shops the world over that usury is alive and well; everywhere. Access to credit leads to appetite for credit it is that simple.

In an attempt to check this rampant credit growth, the administration is attempting to curtail availability of credit and is withholding stimulus from the infrastructure and housing markets. The economy is understandably slowing down. This kind of responsible behaviour looks great on paper because policy wonks believe they can stimulate again to revitalise growth when needed.

The big question for the global economy is when they will make the determination that enough is enough. If China has a recession it will represent a knock-on effect for all commodity producers as well as the countries that depend on China for exports of finished products. 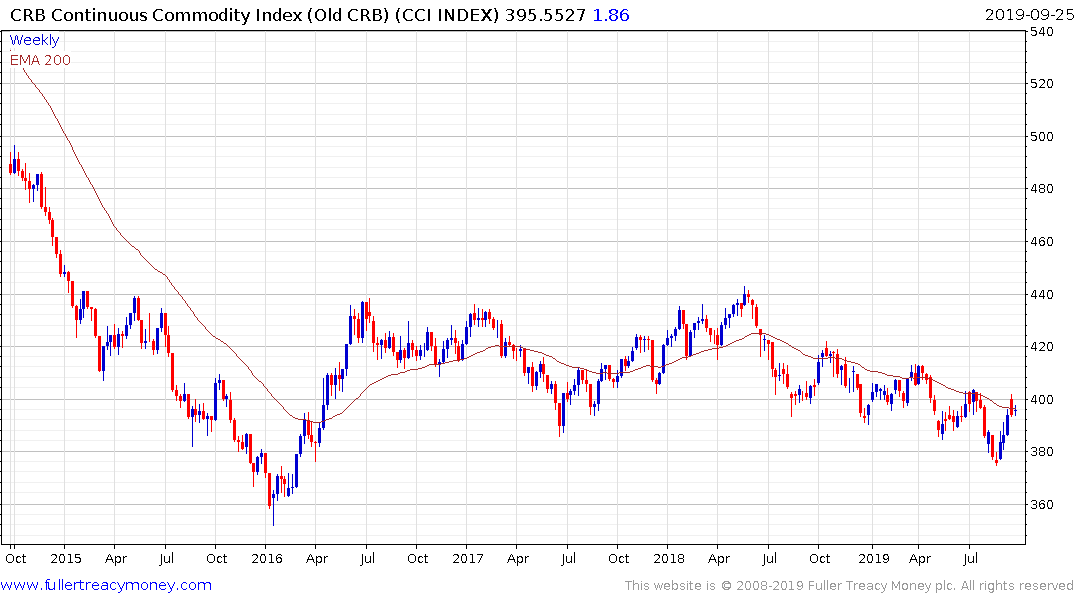 The Continuous Commodity Index continues to trend lower and is currently testing the region of the trend mean. A sustained move above 400 will be required to signal a return to demand dominance.