For an example of how the economy might recover faster than expected, consider that the consensus estimate for fourth-quarter growth is just under 4% while the Atlanta Fed’s GDPNow current estimate is 10.4%. Although the fourth quarter might not turn out to be quite so rosy given rising Covid-19 cases, the Atlanta Fed number still illustrates the possibility of some very good outcomes for the economy. For another example, consider that the $900 billion fiscal package is about 4.5% of GDP, or just about the size of the output gap. Imagine the possibility of being on the edge of full capacity already when the vaccine has been sufficiently distributed to allow the resumption of normal activities.

To be sure, any estimates of the output or unemployment gaps are just that — estimates. They will raise some worries about reports showing higher rates of inflation yet still leave the Fed hesitant to change the expected path of rate increases. The Fed will believe the economy is operating closer to full capacity if wage growth accelerates meaningfully beyond the 3.5% seen in July 2019, the high of the last cycle. That would help the clear the way to higher interest rates

My instinct is that getting all three of these pieces to come together makes inflation more of a 2022 story than a 2021 story. At this point, the 2021 story still looks less like real inflation and more like an inflation scare. And with its new policy strategy, the Fed won’t scare easily.

The rebound from a large decline will always have the benefit of a base effect. A decline of 20% requires a rebound of 25% to get back to even. When that occurs in a short period of time it looks like a big move and it affects sentiment. 2021 is going to be a year of reflation because economic contractions are already being repaired as vaccines are rolled out. The rising number of cases at present are as much to do with the higher transmissibility of the new strain as they are about the impatience of consumers to get back to life as normal. That suggests plenty of scope for higher consumption.

One thing that has been particularly clear is prices have been rising by double digit percentages on Amazon. Shipping rates at all of the primary vendors are rising at least 5% in January. Since the survival of vendors on Amazon is driven by reviews and ruthless price comparison, rising prices is a sign both of disrupted supply lines and rising inflationary pressures. The other side of that argument is the website caters primarily to the winners from the pandemic who are best placed to tolerate price hikes. The other half of the population is in no position to pay more for anything.

The question no one seems willing to ask is what if the increased unemployment benefits become permanent? Isn’t it possible they are rolled forward indefinitely or at least until the unemployment rate is back within statistical norms and low-end service jobs are once more available? Perhaps, the benefits never return to the pre-pandemic levels and reach a permanently higher plateau. That suggests workers will demand more money to take any job. Those demands tend to flow upwards.

In the near-term there is no prospect of rates rising since reflation and higher than average inflation is what the Fed wants. They have clearly signalled we are now in an extended period of negative real interest rates. The Fed has given up on anticipating market events, they are going to wait for clear evidence of inflation before acting. 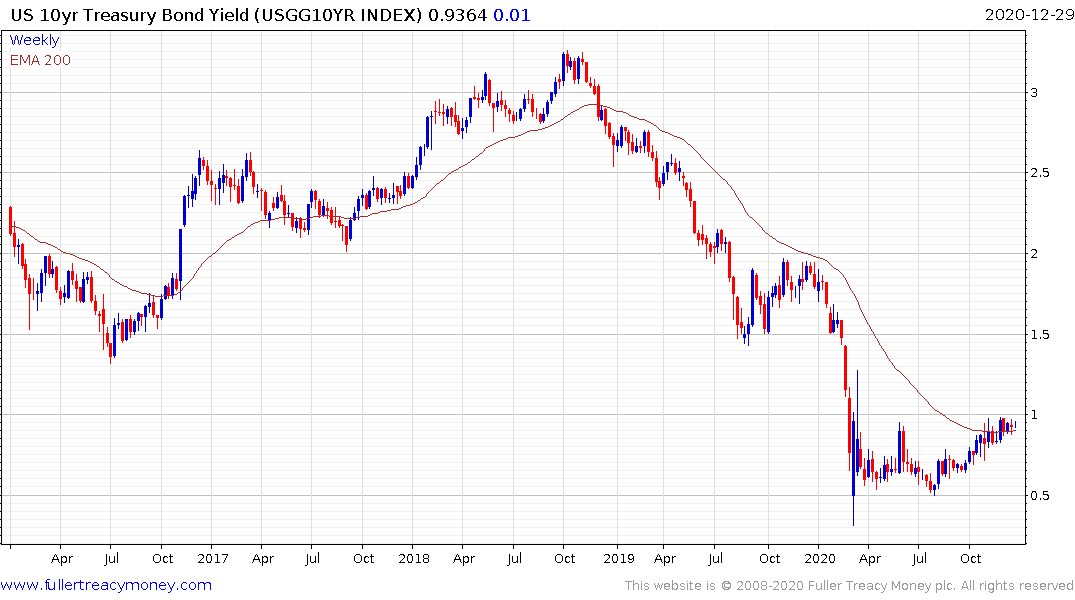 As long as 10-year Treasury yields continue to trade below 1% the status quo will remain in place. However, a sustained breakout would suggest investors are losing patience with the Fed’s new suite of policies.