Here is the text of a bulletin from Bloomberg on today's Fed Meeting.
Comment of the Day

Here is the text of a bulletin from Bloomberg on today's Fed Meeting. by Eoin Treacy

Here are the Key Takeaways from today's FOMC events:

The FOMC hiked rates a fourth time this year to a decade high, ignoring President Trump’s criticism, and lowered its outlook to two hikes from three next year.

Powell specifically endorsed the dots, citing them in his press conference as a guideline for the committee and a useful tool.

The committee tweaked its guidance to ``some further gradual increases’’ -- a more hawkish development compared with the alternative of dropping the guidance.

Powell said all meetings are live for possible moves next year, but gave no strong hints as to when the Fed would raise next.

There was unanimous support for the hike.

Powell said that Trump's comments had no impact on policy and that the Fed is committed to doing what it thinks is best.

Powell said financial conditions caused a slight downgrade in 2019 forecasts but no real change in the outlook.

​Markets took FOMC and Powell as hawkish, with the yield curve flattening and stocks falling.

The dot plots suggest two interest rate hikes next year but Jay Powell basically said they are going to be data dependent next year. The one thing that stood out to me from the press conference was that no one asked questions about the pace of balance sheet run off. That says a lot.

The simple fact is that quantitative easing succeeded in inflating asset prices but had an arguable effect on the economic growth Interest rates on the other hand have a significant effect on the economy. The Fed is basically on autopilot for the balance sheet run-off and that suggests a $600 billion run-off next year which is the approximate equivalent of a 75 basis point hike.

If one were completely blinkered then the potential to hike twice next year might be considered dovish but the size of the run-off in the balance sheet makes a nonsense of that conclusion.

This hourlong interview of Stanley Druckenmiller on Bloomberg is worth taking the time to view.

The lead indicators for trouble in the economy he refers to are the economic cyclicals such as banks, housing autos and retail. None of these are in uptrends; quite the opposite. 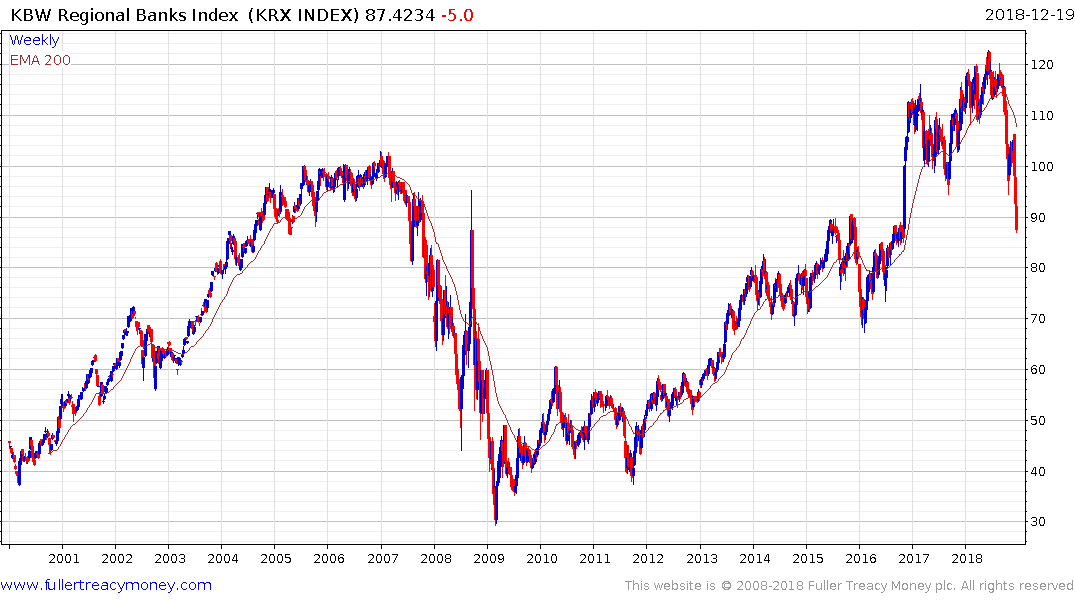 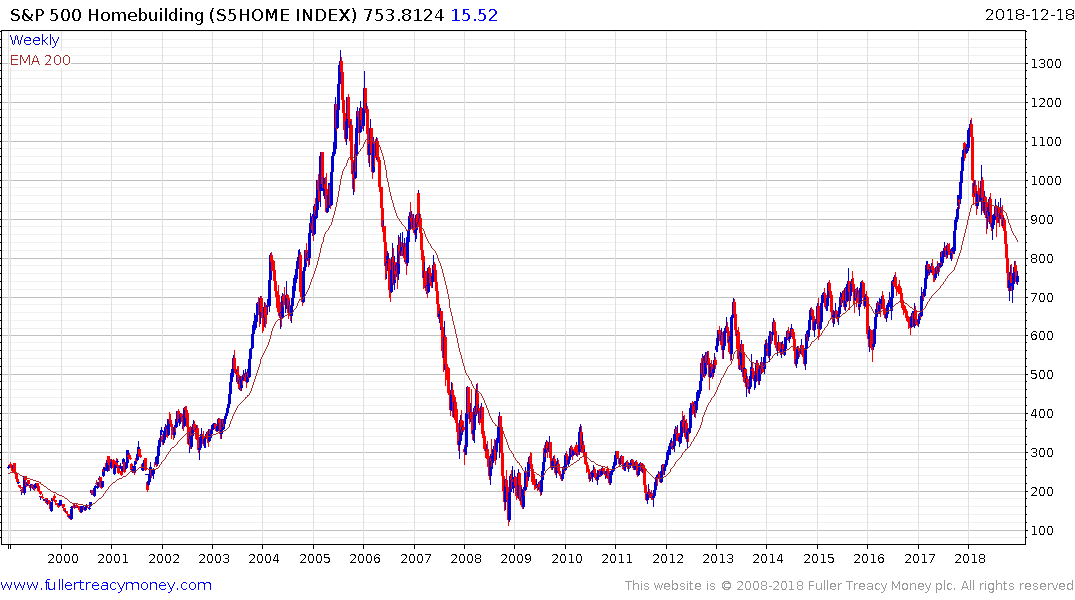 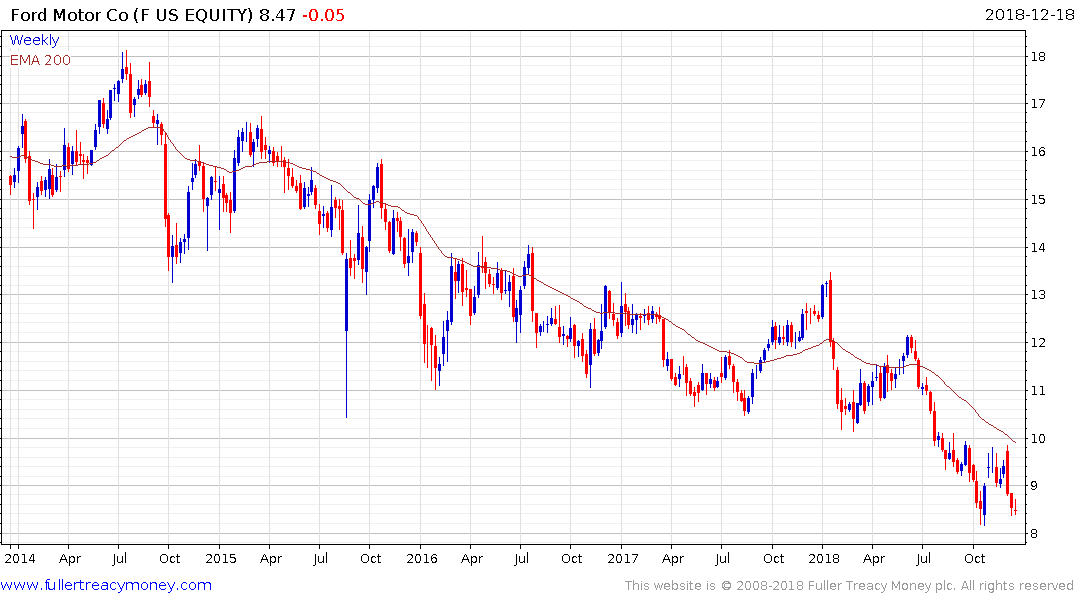 The yield curve is very flat. 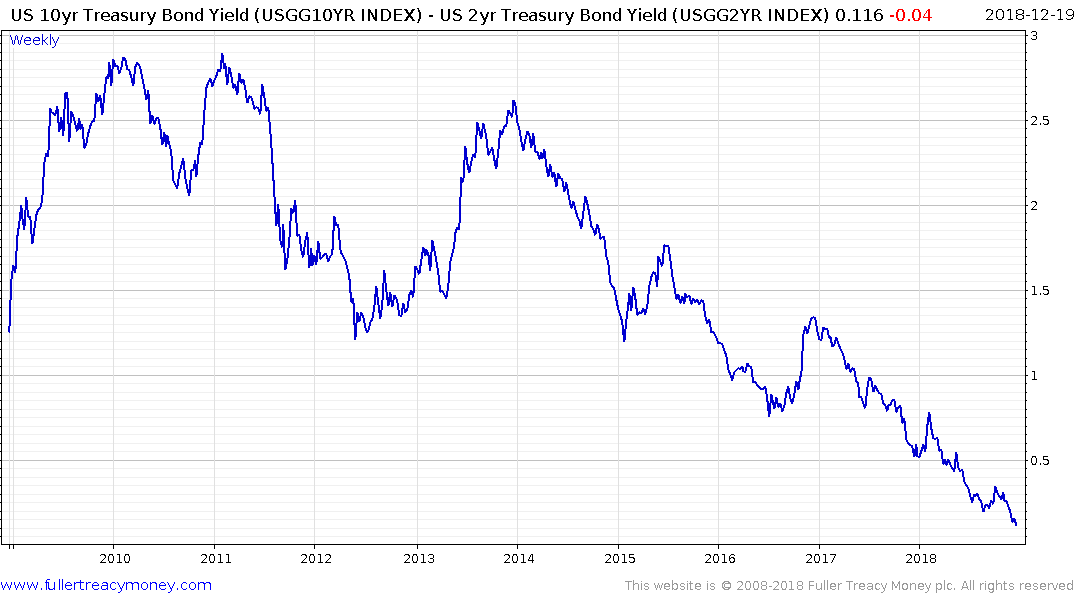 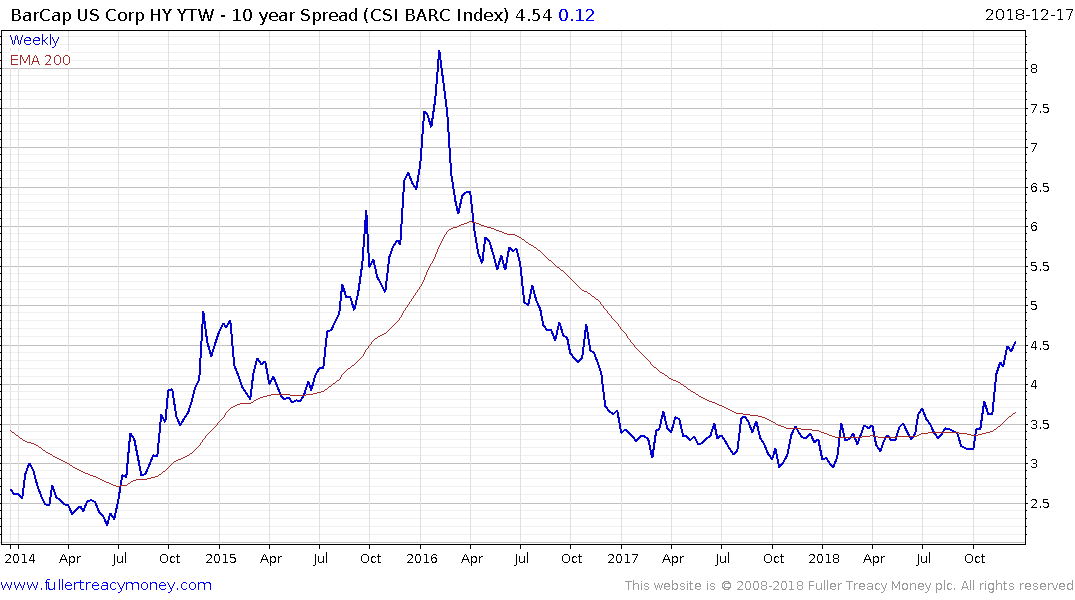 He also stated credit is a lead indicator and high yields spreads have broken out. 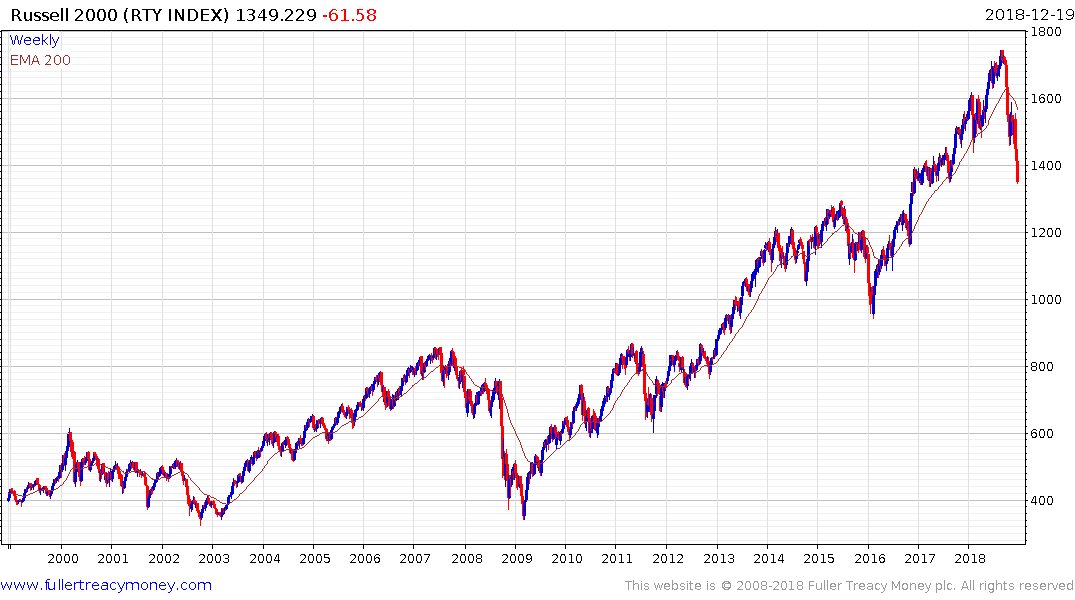 The Russell 2000 which is often considered to give a view of the health of the domestic economy is trending down.

There are a number of arguments that tax selling and hedge fund liquidation are ongoing into the end of the year and the last time we had a big decline in December was in 2012. The first day of January in 2013 say an impressive rally that persisted for nearly three months and investors are hoping for a similar result this year, not least because we definitely have short-term oversold conditions. The big difference today is liquidity is tightening rather than easing. Nevertheless, a clear upward dynamic would begin to pressure shorts. 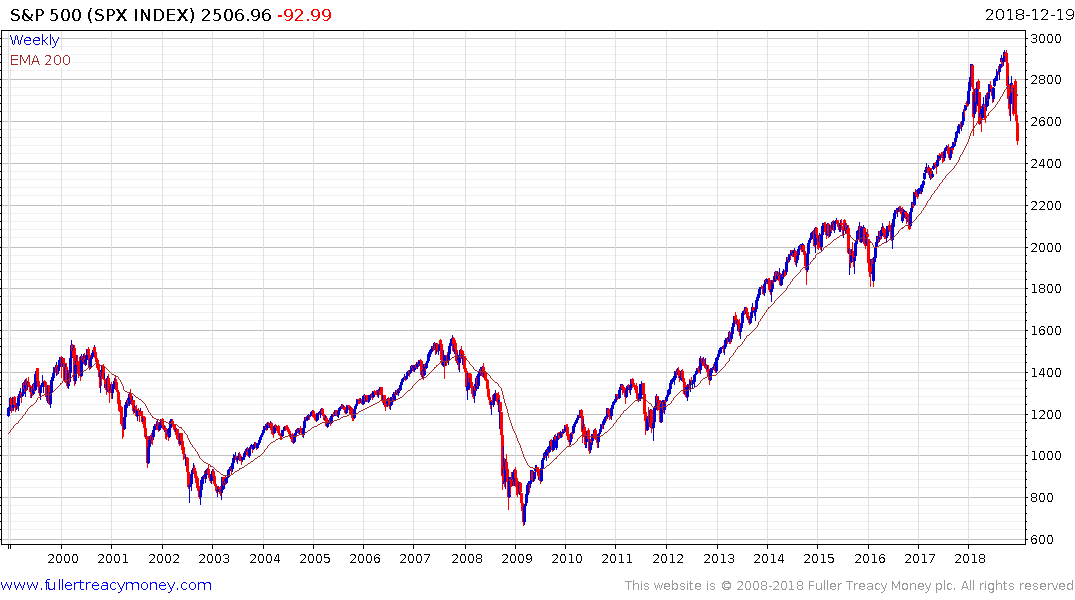 The S&P500 has now taken out its February low on a closing basis. There is a short-term oversold condition but this is a bearish signal overall. 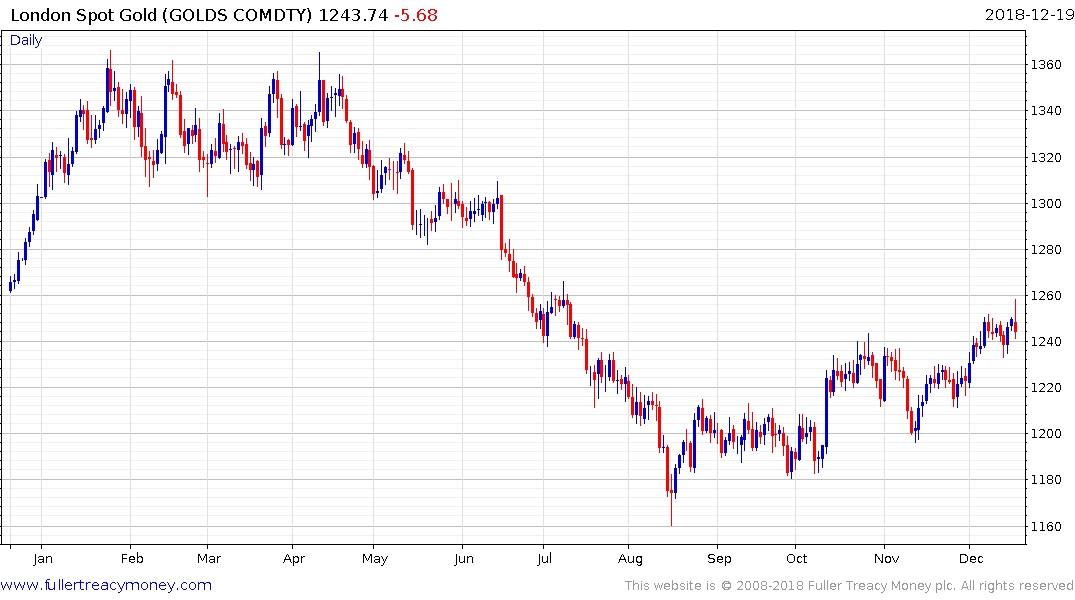 Gold posted a downside key reversal today from the region of the trend mean suggesting at least near-term resistance. 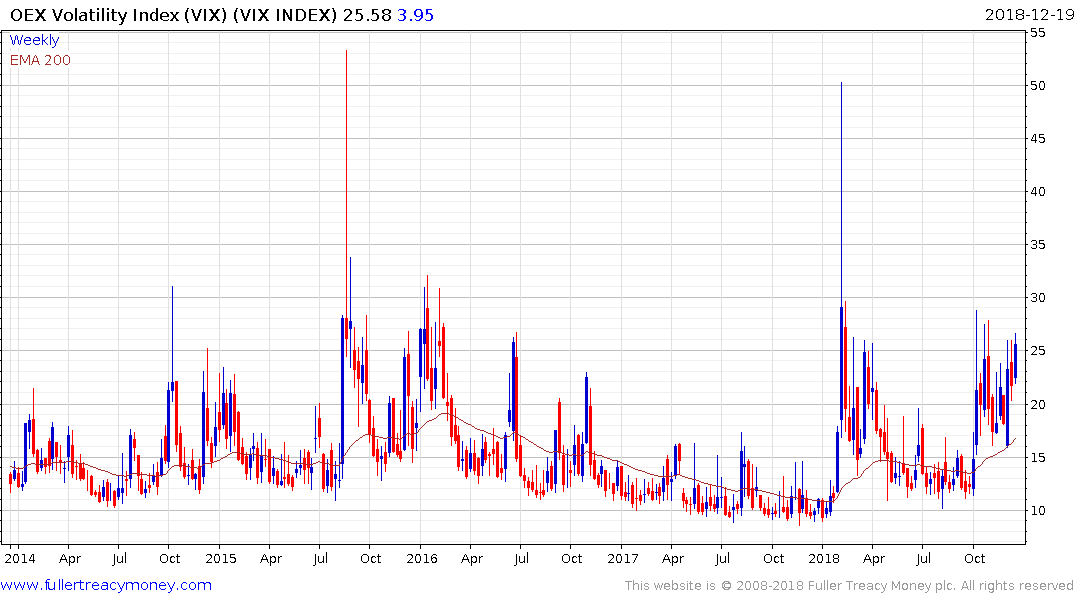 The VIX Index has first step above the base characteristics. 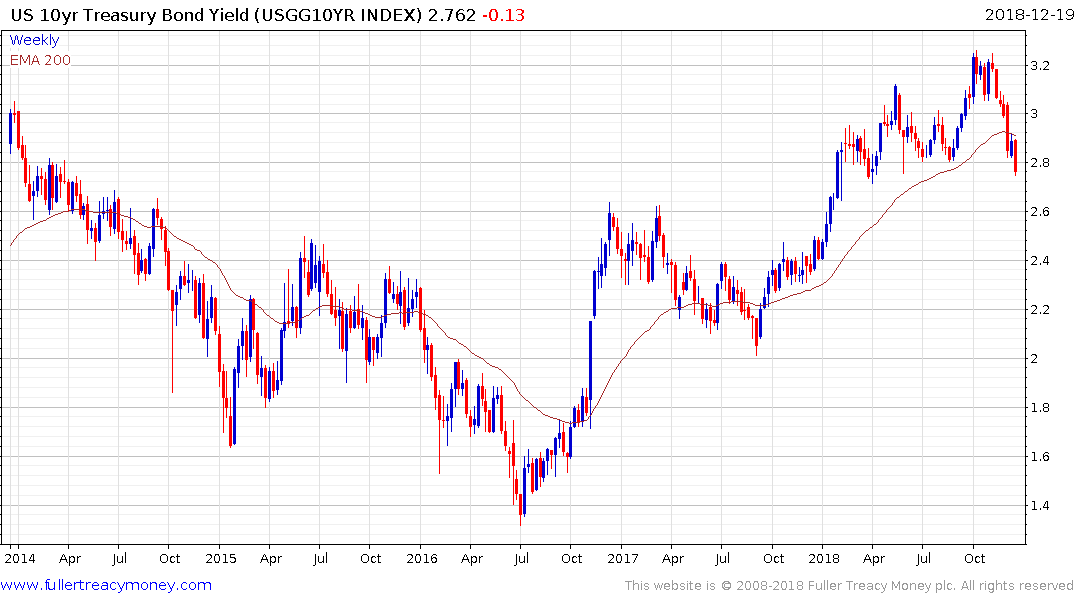 US 10-year Treasury yields continue to fall and are extending the decline below the trend mean. A sustained move back above it will be required to question demand dominance.