Gold and subscriptions by Eoin Treacy

I lost a subscriber today. In our business losing a subscriber is not unusual. Every loss is mourned while gaining a subscriber is always celebrated. Hopefully the latter outweighs the former and, more often than not, it does. Above all we have always prized the dedication of the people who stick with us through thick and thin. For that I simply wish to say thank you.

We have an enormous wealth of experience within the Fuller Treacy Money Subscriber collective. If any of our seasoned investors would like to introduce some younger potential subscribers we would be happy to offer them free trials.

Most successful newsletters have calculated how long a subscriber remains a customer. Then they attempt to maximise revenue from that person by upselling into sequentially more expensive products; while they have the person’s attention. Ultimately, they seek to sell a lifetime subscription. We’ve never done that for better or worse. You get everything in one product: video, audio, commentary, my personal trading details for one price.

I had an email today from a soon to be former subscriber expressing frustration at the fact I do not provide enough analysis and provide too much commentary. He also expressed frustration at the sideways trend in gold. I said in yesterday’s copy that the renewed bull trend in gold will be confirmed by a move above $1850. Until then we are still in a range. I am positioned to benefit from a breakout, and based on my original entry points, my breakeven is $1800. Nothing I say or do will cause a breakout to occur sooner than the market is ready to support it.

One thing I have noticed is that our number of subscribers is highly correlated with the price gold. I might write about all manner of different subjects from tech to emerging markets, fixed income to China, India, Australia, the UK, Japan, and individual companies but people find this site because of gold and commodities. That’s the reason I am in Riyadh right now too.

If one subscriber is expressing frustration with gold’s volatile sideways trend, then many others in the market feel the same way. I know I do. If people are losing patience and exiting while prices are stable to rising mildly, that’s evidence of weak hands giving way to strong hands which is powerfully bullish over the medium term.

Gold does well when central banks are inhibited from doing what is necessary to control inflation. I believe we are in that exact situation today. Bond yields are pricing in as many as four interest rate hikes this year. That’s a gross overestimation of what the economy is capable of absorbing in my opinion. Such a sudden reversal of monetary largesse would take a heavy toll on stocks well before the fourth hike. After a 5% pullback on the stock market Jay Powell's statement today is already beginning to skew more dovish which is Dollar negative and gold positive. 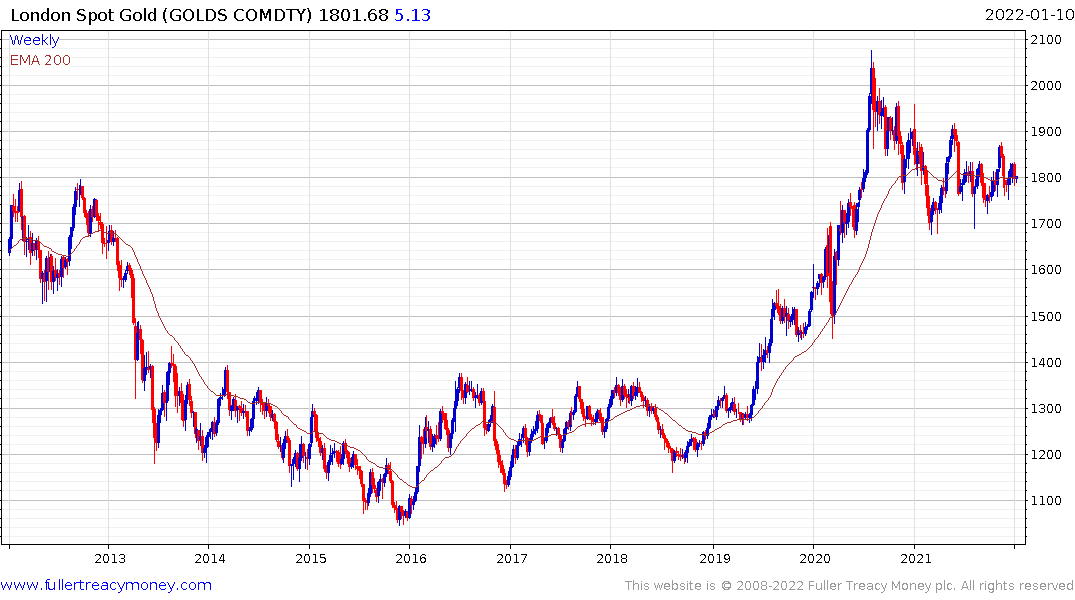 It seems the closest analogue we have right now is what happened with the ECB in 2012. Back then they were committed to controlling inflationary pressures. Then the sovereign wealth crisis hit and they have never raised since. First Japan and now Europe have failed to get off the zero bound. Perhaps we are going to see the same thing from the Fed. They will raise rates once, maybe even twice and will then be forced to reverse. The jump in funding costs for the government alone and the simultaneous threat to growth that represents lends a high probability to the Fed balking at raising rates very far.

I’ll have the pleasure of sitting down with the CEOs of Perseus Mining and Alien Metals tomorrow and I look forward to hearing their views on gold, inflation, and its impact on production costs. I’ve also been invited to the Gala dinner tomorrow evening so it is going to be a rather full day. I’ll be updating when I can.