Without much fanfare, a second global monetary easing was unleashed in May as the dollar fell without anyone appearing to notice. The fact that the greenback fell of its own volition suggests that the unprecedented risk aversion seen in March is really beginning to unwind. If so, then the US$1.2trn sitting in US money market funds since February will be itching to find a home or asset class that can hold its value (see Global Asset Allocation: Too Much Money Chasing Too Few Assets). Throughout 2019, US money markets only accumulated US$555bn.

As fears of the COVID-19 pandemic recede, the Federal Reserve is continuing to add dollars to the global monetary system at an unprecedented rate (see RHS chart). Just as importantly, US implied inflation expectations, as measured by the 10-year breakeven inflation rate, are rising after lurching into deflation. Coincidentally, this is occurring as the futures markets price in the probability of negative US rates. One of the most important turning points for the direction of equity markets is the shift into inflation (see US: Market Bottoms).

The upwelling of emotion that has poured out onto the streets of the USA, and elsewhere, is a symptom of a much larger issue. The reality is that globalisation has hollowed out the middle classes of most OECD countries. Simultaneously, the evolution of technology means we can do even more with less which is dehumanising the economy. That also concentrates the benefits of globalisation in the hands of the well-connected, wealthy and/or highly educated individuals, but also leaves millions of people behind with a degraded standard of living.

Manufacturing jobs losses have completely erased the advance since the lows in 2008. Since 2000, the USA has lost 6 million manufacturing jobs. Manufacturing has always been volatile; it takes a big hit during recessions but tended to bounce back quickly too when economic activity improved. That ended with China’s accession to the World Trade Organisation. Now the rebounds are modest but the declines are just as deep if not deeper than they were before.

The UK’s trend is even more acute and suggests this recession will result in the near total destruction of manufacturing in the country.

These are big themes that underly the rise of populism, the evolution of protest movements and the exploration of universal basic income, tax cuts and debt monetisation. The USA’s stimulus accounts for about half of all global support and that is now taking a toll on the currency. It is also part of the wider tapestry of the inability of traditional measures to tackle the challenges the global economy faces. Asset price inflation is making the problem worse instead of better for millions of people. 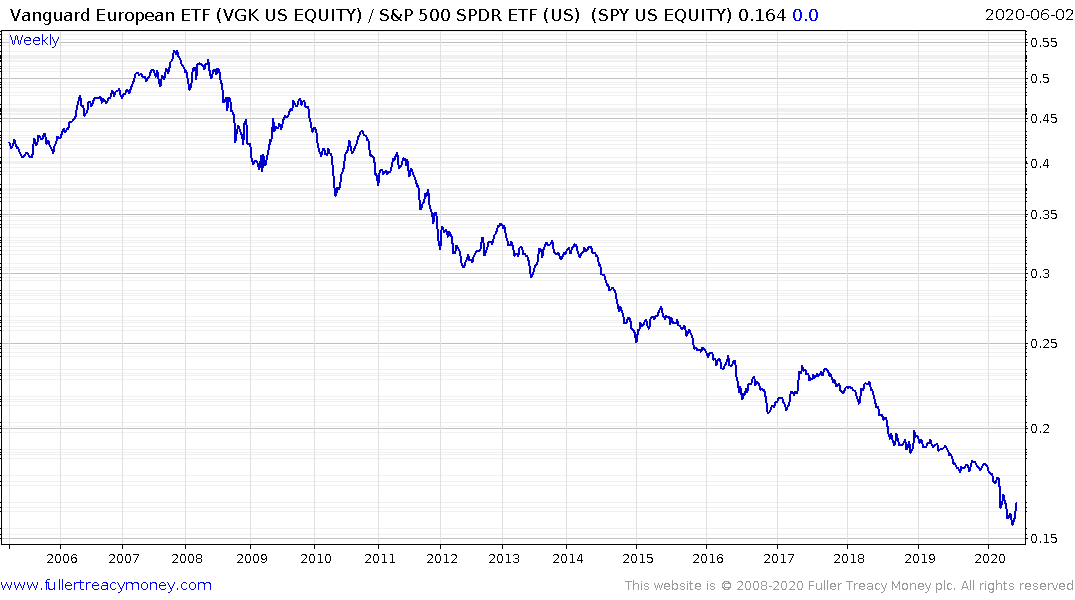 Vanguard’s US Dollar Europe ETF has been trending lower against the S&P500 SPDR ETF since 2008. It has bounced over the last week as European stocks have for the first time in years managed to rally without the Euro falling. A break in the ratio’s downtrend would clearly signal money is deserting Wall Street but it is too early to draw that conclusion today.