Fearing Inflation, Germans Load Up on Gold Bars
Comment of the Day

Demand for physical bullion in Germany, traditionally the biggest coin and bar buyer in Europe, was the highest since at least 2009 in the first half, World Gold Council data show.

While purchases in other Western markets have also been strong, Germans in particular are pouring into the metal as a hedge against rising inflation -- and dealers say business remains good.

“We have a long history of inflation fear in our DNA. Now the inflation risk is picking up,” said Raphael Scherer, a managing director at metals dealer Philoro Edelmetalle GmbH, whose gold sales are up 25% on what was already a strong 2020.

“The outlook for precious metals is very positive.” Germany’s love of gold has its origins in the hyperinflation seen under the Weimar Republic a century ago, which saw consumers’ buying power collapse. Last month, the reopening of the economy helped German inflation jump to the highest in more than a decade. Negative interest rates in Europe are also making non-yielding assets like gold more attractive, Scherer said.

First-half demand for bar and coins in Germany increased by 35% from the previous six months, compared with 20% in the rest of the world, WGC data show.

I just realised this is the third day in a row I have featured an article relating to Germany. Imported inflation is running at a record rate and there is no sign it is abating just yet. Taiwan Semiconductor raising prices by 20% yesterday, rising shipping rates and higher commodity prices are all conspiring to raise prices for just about everything; everywhere. Meanwhile Euro weakness is a tailwind for inflationary pressures.

This is all happening at a time when there is scope for significant political upheaval as Angela Merkel retires. The economy is being remade to excise both nuclear and coal from the energy mix and to penalize the industrial heartland for its history of carbon emissions. There is already a requirement for stimulus to deal with the pandemic and flooding. That is only likely to grow as the impact of climate adventurism is felt in the wider economy.  German consumers therefore have a clear rationale for favouring physical gold and similar investments.

There has been a cacophony of analysts suddenly turning very bearish on gold following the two-day plunge earlier this month. I take a different view. This is normal for gold in an ongoing medium-term consolidation. We should expect stabs on the downside as traders test whether underlying demand is still evident. Shorting rallies in gold has been a profitable strategy for a year. One would have had to have been very nimble to make money from the last plunge because the price bounced back so quickly. That suggests to me we are coming to the end of this corrective phase. 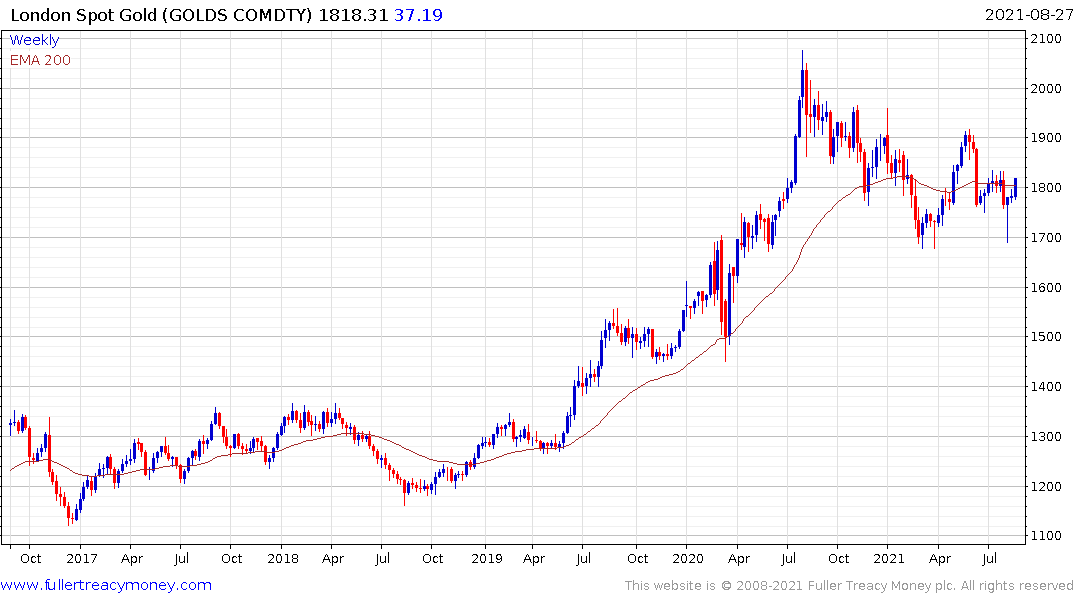 Gold is exceptionally frustrating to trade and invest in, while it is ranging, because its congestion areas tend to be very volatile. The times when it breaks out tend to deliver accelerations and make buying even more difficult than doing so on weakness. When faced with this kind of environment one has to foster a buy the big dip mentality because they do happen.