“There is no question that a lot of the youth use is being driven by Juul,” Gottlieb said.

Produced by San Francisco-based Juul Labs Inc., Juul devices resemble a USB thumb drive and have become popular among students. The company has more than two-thirds of the U.S. e- cigarette market, according to Nielsen data. The FDA is currently developing a survey to determine what percentage of youth vapers are using Juul products, Gottlieb said.

A nationwide sting operation from June through August resulted in more than 1,300 warning letters and fines to retailers who sold Juul products and other e-cigarettes to kids.

It was “the largest coordinated enforcement effort in the FDA’s history,” according to the agency.

Gottlieb recently began to ask whether the use of Juul and other similar products by kids is overshadowing any benefit to adult smokers using the devices to help them quit cigarettes. He said in June tobacco companies “better step up and step up soon” but he didn’t divulge what consequences the industry could face -- until now.

In July 2017, the FDA said it was considering lowering nicotine levels in traditional cigarettes. In addition, the agency pushed back until 2022 a deadline for electronic- cigarette companies to submit applications to the FDA. Gottlieb said at the time he was trying to ease the regulatory pathway for products that are potentially less harmful sources of nicotine than smoking. Critics of pushing back the deadline raised concern that more kids would take up vaping.

Congress gave the FDA the authority to regulate tobacco products in 2009. The agency extended that reach to other tobacco products, including e-cigarettes, in August 2016 and allowed those products that were already on the market to continue sales while preparing an application for FDA clearance.

The FDA is investigating whether some products on the market were introduced after the 2016 date and may need to halt sales, though didn’t name which ones may be violating the law.

I had a discussion with my children about addiction and the cashflow seepage from their savings that would occur were they to take up vaping. We also looked at the cashflow of tobacco companies and talked about how much money they make from addiction. I’ve found it is not much use talking to children about their long-term health because it is no relatable. However, talking to them about not being able to afford a squishy or computer game because of an addiction gets a lot more traction. This conversation resulted from the fact that many of the videos they have encountered on YouTube or iFunny highlight children and young teenagers engaging in vaping.

Juul has been taking market share from tobacco companies because their primary growth area is in appealing to young people who want to look cool. The sector rallied today on the assumption Juul will be less of a threat if the FDA bans products explicitly aimed at the youth market. Elsewhere, Juul Labs filed a restraining order to ensued Chinese knock-offs are no longer sold on eBay where there are no age restrictions. 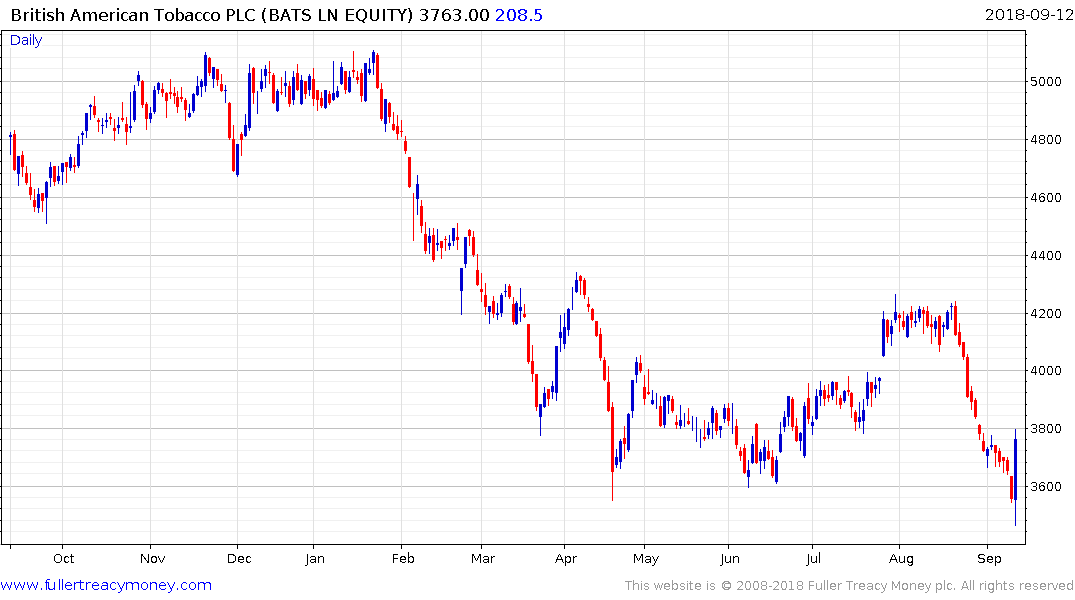 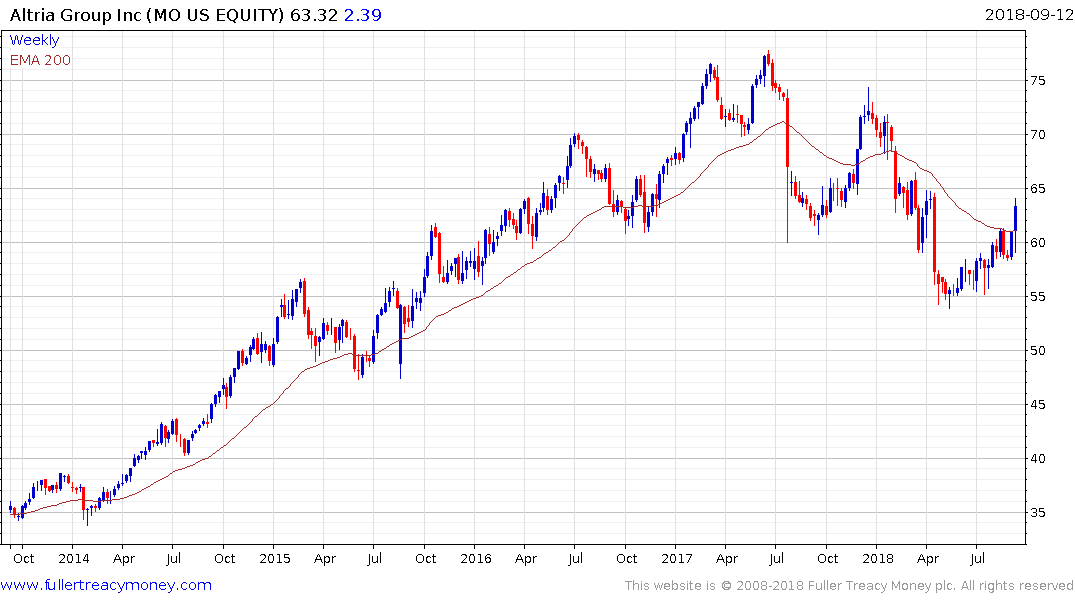 Altria Group continues to exhibit relative strength and broke successfully back above the trend mean today.