After negotiating through the night, the Netherlands, Austria, Denmark and Sweden are satisfied with 390 billion euros ($450 billion) of the fund being made available as grants with the rest coming as low-interest loans, the officials said, asking not be named discussing private conversations. The total size of the recovery package is in flux, but an earlier proposal was for 750 billion euros.

The bloc’s 27 leaders will gather again at 4 p.m. in Brussels to settle the outstanding issues such as the overall size of the fund and the mechanisms for controlling its spending. A French official said that their delegation now see a path to a full deal.

“After lengthy talks last night, we worked out a framework for a possible agreement,” German Chancellor Angela Merkel said on Monday. “It’s progress and gives hope that perhaps today an agreement will be made, or at least that an agreement is possible.”

€750 billion is a substantial aid package, but is rather small when compared to the measures taken by the USA. The reluctance of creditor nations to give money away, the length of time taken to negotiate the deal, and the fact the agreement has been reached following the peak infection point for Eurozone countries have contributed to the tailored size of the package. 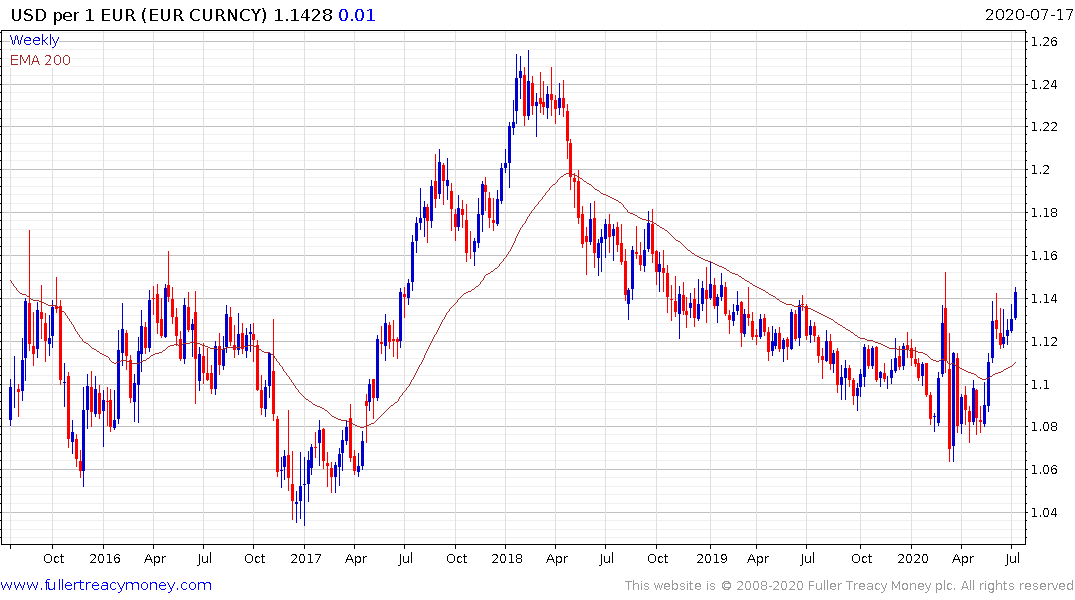 The reluctance to massively increase spending is acting as a tailwind for the Euro as it paused in the region of the March peak. A sustained move below the trend mean would be required to question medium-term scope for additional upside. 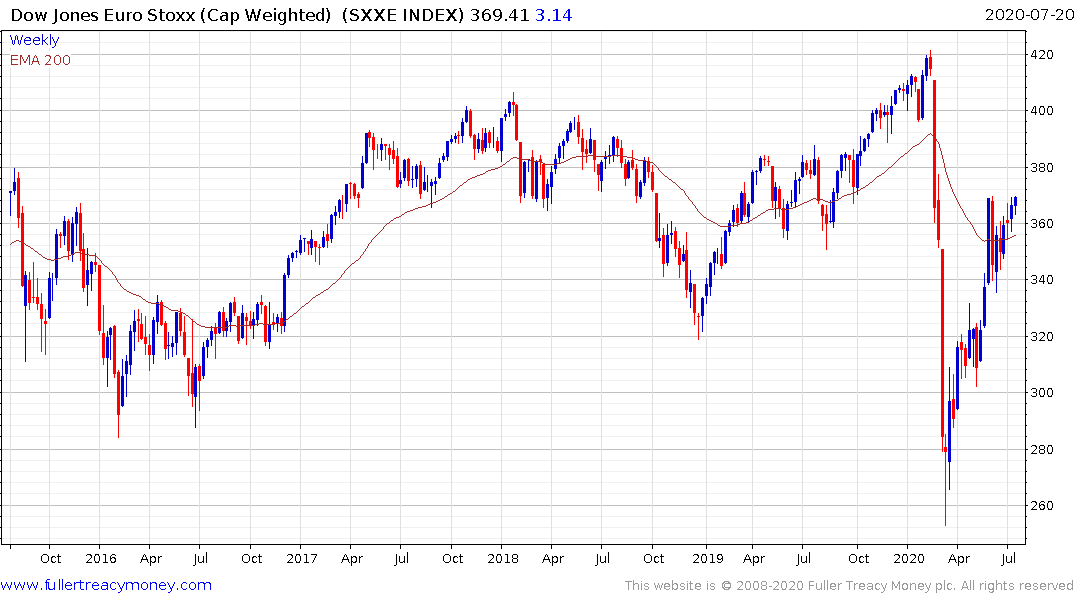 The Euro STOXX Index is closed above its trend mean today and is testing the June peak. A clear downward dynamic would be required to question potential for additional upside. 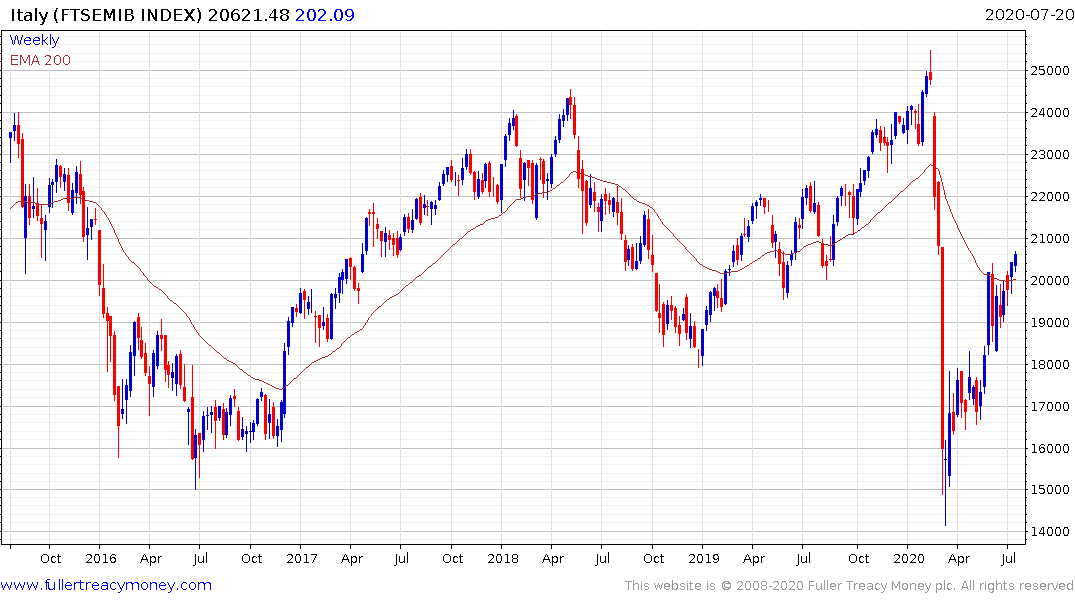 The Italian FTSE/MIB Index hit a new recovery high today as it breaks out of a six-week range. 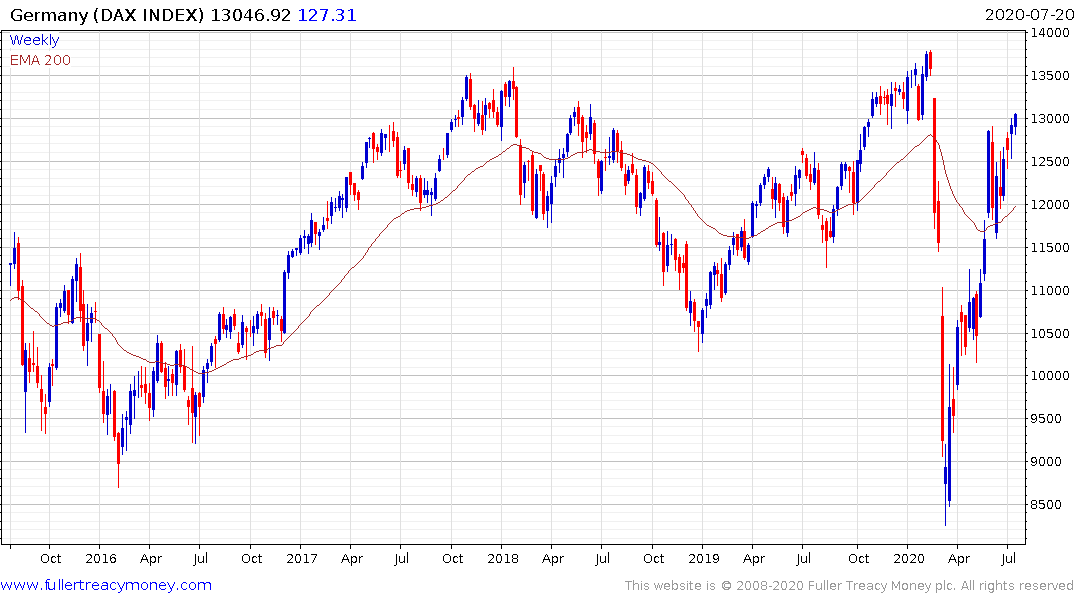 The German DAX Index continues to lead as it breaks out the consolidation above its trend mean.

The bigger picture is this is an additional €750 billion which will further boost the liquidity in the global markets. The total assets of central banks index is now at $26.55 trillion and the weakness of the US Dollar further inflates that figure.