Erdogan Is Refusing to Accept Economic Reality
Comment of the Day

Erdogan Is Refusing to Accept Economic Reality by Eoin Treacy

With inflation running at 15.85 percent, that leaves the real interest rate below 2 percent -- an inadequate response to consumer prices accelerating at three times the central bank's target rate.

The stakes are high. Turkey's domestic institutions have more than $40 billion of dollar- and euro-denominated bonds and loans maturing by 2020, according to data compiled by Bloomberg Intelligence. Every lurch lower in the lira makes servicing those debts more expensive.

Meantime, foreign banks have exposure to Turkey worth about $224 billion, according to data from the Bank for International Settlements. If the U.S. imposes economic sanctions in retaliation for Turkey's refusal to free American pastor Andrew Brunson, arrested almost two years ago and accused of supporting terrorism, they may be forced to cut those exposures.

Turkey had, at least until recently a GDP of $850 billion, but its total of external debts has been trending higher for years and now sits at $467 billion. That’s an external debt to GDP ratio of 55% which is before domestic debts are considered.

Lambasting financial markets for expecting coupon payments is rather two-faced considering no one forced Turkey to take on these debts. However, Erdogan’s retrenchment to Islamic distaste for usury is a worrying development for the holders of Turkish debt and capital controls are a growing possibility. 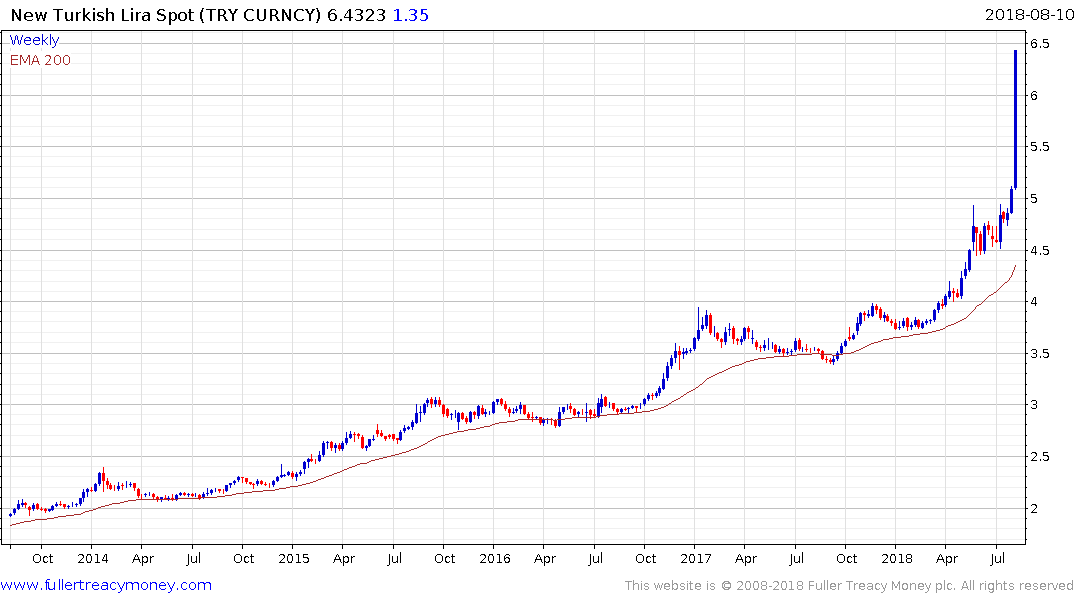 The US Dollar accelerated higher to today’s peak and the move looks climactic. After all acceleration is a trend ending. However, that begs the question is it a short-term low or a long-term low. The answer will be in the response of the central bank because much higher interest rates are the only way to encourage Lira buyers to return to the market. 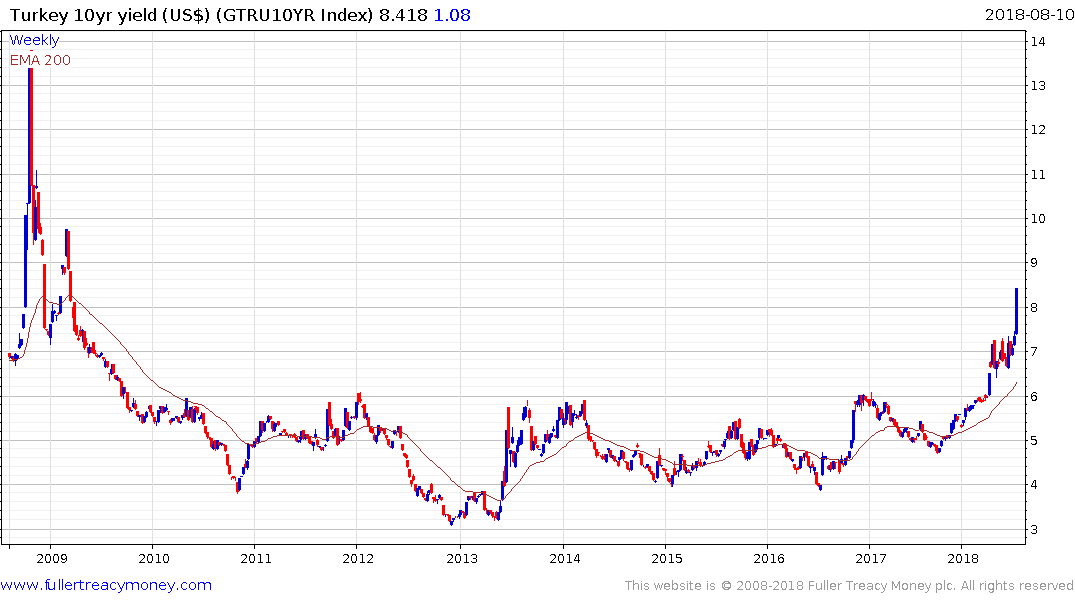 US Dollar Turkish yields remain on an upward trajectory and investors are likely beginning to think the peaks posted back in 2008 near 14% are no an unreasonable destination considering the much weaker state of the Turkish economy now compared to a decade ago when it was being promoted as the gateway to the Middle East. 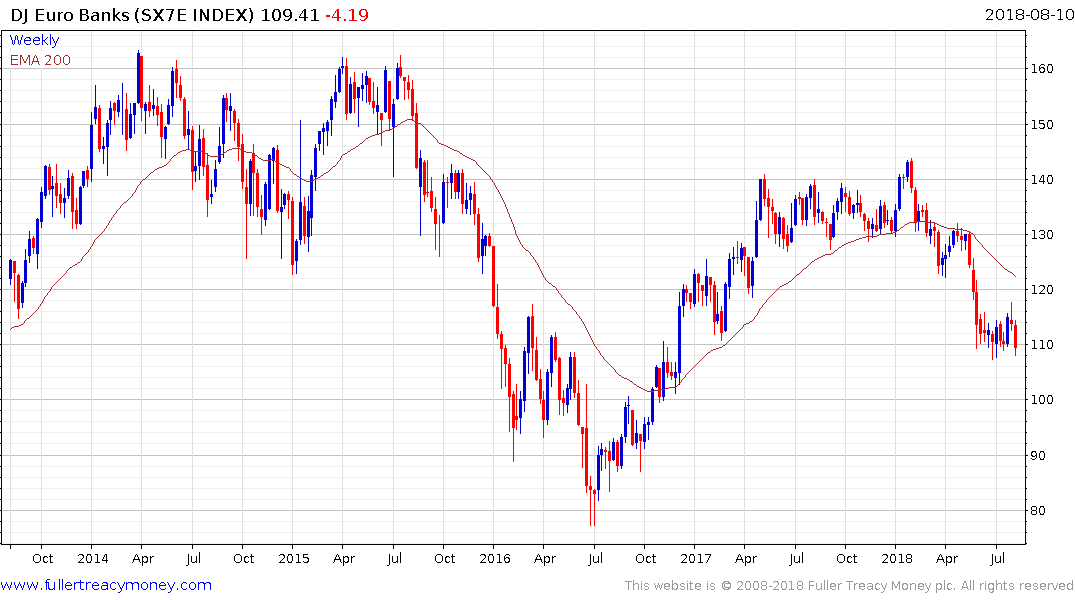 The Euro STOXX Banks Index dropped to close at a new low reaction low today and a countermanding upward dynamic would be required to question potential for a further test of underlying trading. 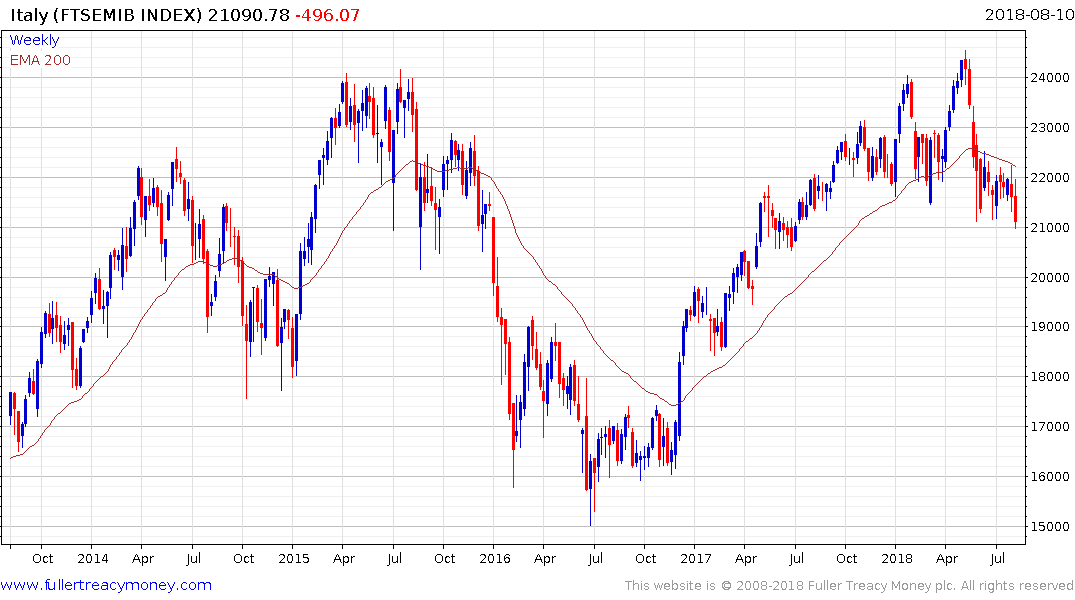 The Italian FTSE MIB Index has been distributing below the trend mean for the last couple of months and closed at a new reaction low today. 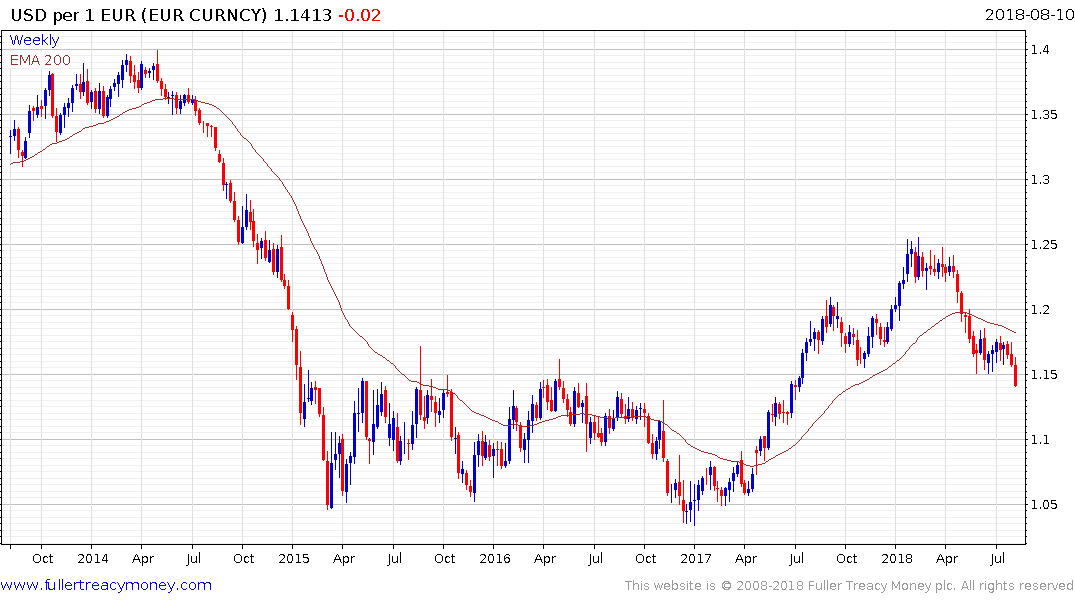 The Euro dropped downwards from its recent range to extend it decline today. The big question considering the Eurozone’s exposure to Turkish assets is how long it will take the ECB to conclude ending quantitative easing is a bad idea.

Additionally, Europe has been paying Turkey to hold Syrian refugees from entering the Eurozone for the last couple of years. Erdogan knows as well as anyone that the refugee crisis represents the soft underbelly of European politics, so it is possible this issue will be used to negotiate better terms with Eurozone lenders.