Even as losses intensify, the S&P 500 remains stuck in the tightest trading range since 1927, down 3.5 percent from a record reached in May. The benchmark has fallen through its average price for the past 200 days for the fourth time this month.

Selling today was heaviest in some of the bull market's biggest winners. Netflix Inc. lost 8.5 percent, while media stocks were poised for a correction as Walt Disney Co. tumbled 5 percent amid an analyst downgrade. Bank of America Corp. and Citigroup Inc. slumped more than 2.7 percent to pace declines among the largest banks.

"We have been conditioned to buying on the dip," said Quincy Krosby, a market strategist for Newark, New Jersey-based Prudential Financial Inc., which oversees more than $1 trillion. "What's happening is that investors want that dip deeper. It's no longer a knee-jerk reaction to buy on the dip because the Fed will underpin the market. Investors are being much more cautious and not as sure that the Fed will be there."

Bullish sentiment at the top of a range and more bearish sentiment at the bottom are typical in any congestion area. However we also know that ranges are explosions waiting to happen and this is particularly true following an environment which has been relatively inert. With the S&P500 now testing the psychological 2050 area market participants are understandably skittish but also looking for a reason to buy. 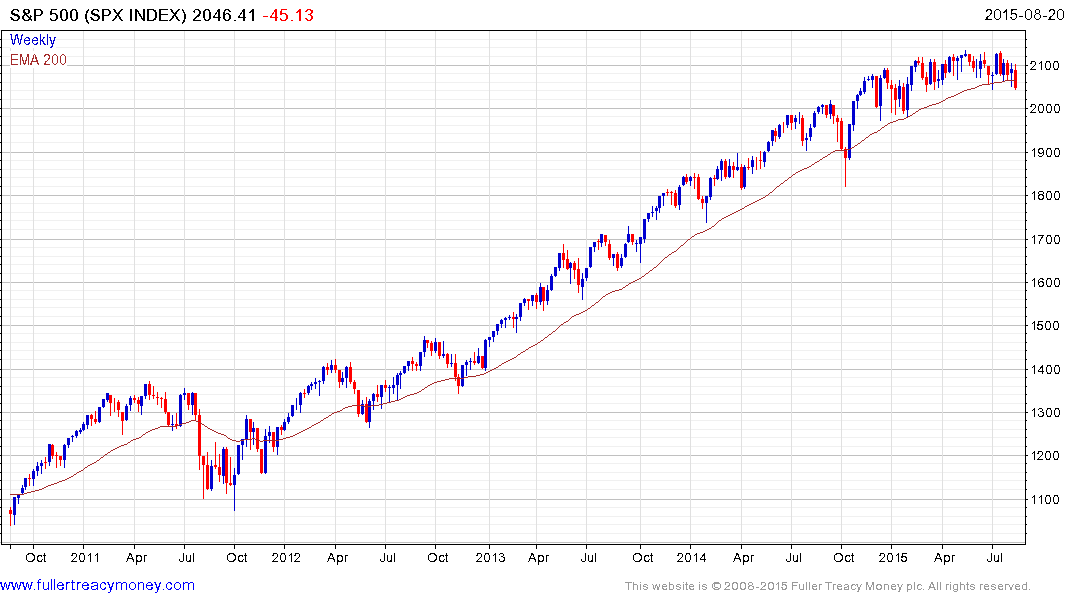 The Index has rallied from the region of the 200-day MA on successive occasions over the last five years, so if the primary consistency characteristic, still in evidence, is to hold, it will need to rally from the current level. The Index has dropped below the 200-day MA on two occasions which coincided with the removal of quantitative easing and there is potential that a somewhat larger reaction is now in sight as the Fed considers whether to raise rates. Against that background finding support in the current area is even more important. By the same token if the Index can hold the range through the end of September, the potential for the congestion area to be resolved to the upside will improve. 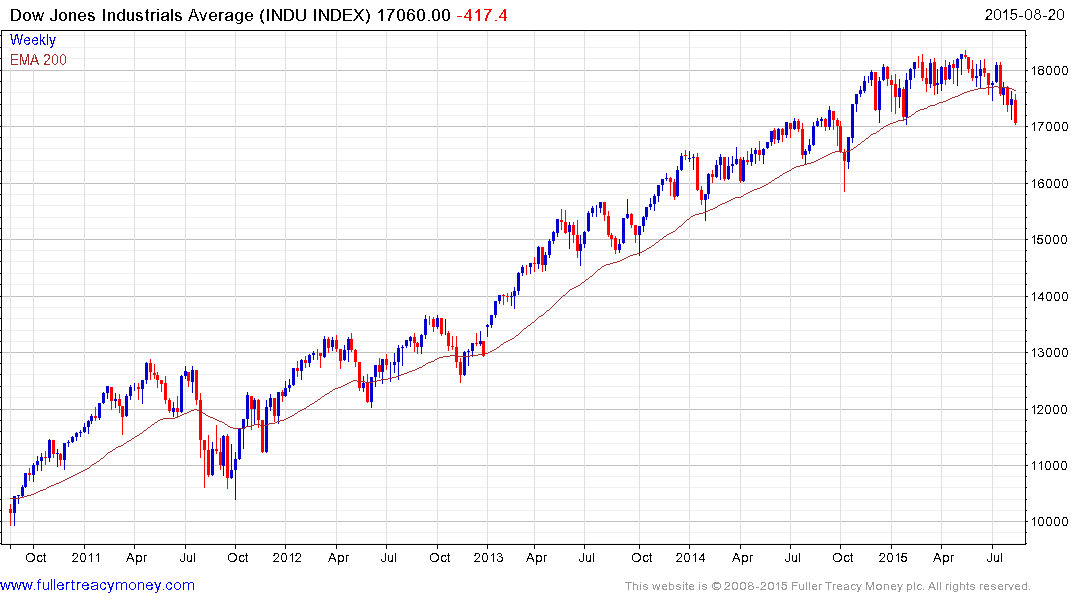 The Dow Jones Industrials hit another new reaction low today and the short-term progression of lower rally highs remains in evidence. A sustained move back above the 200-day MA, currently near 17,650 would be required to indicate a return to demand dominance. 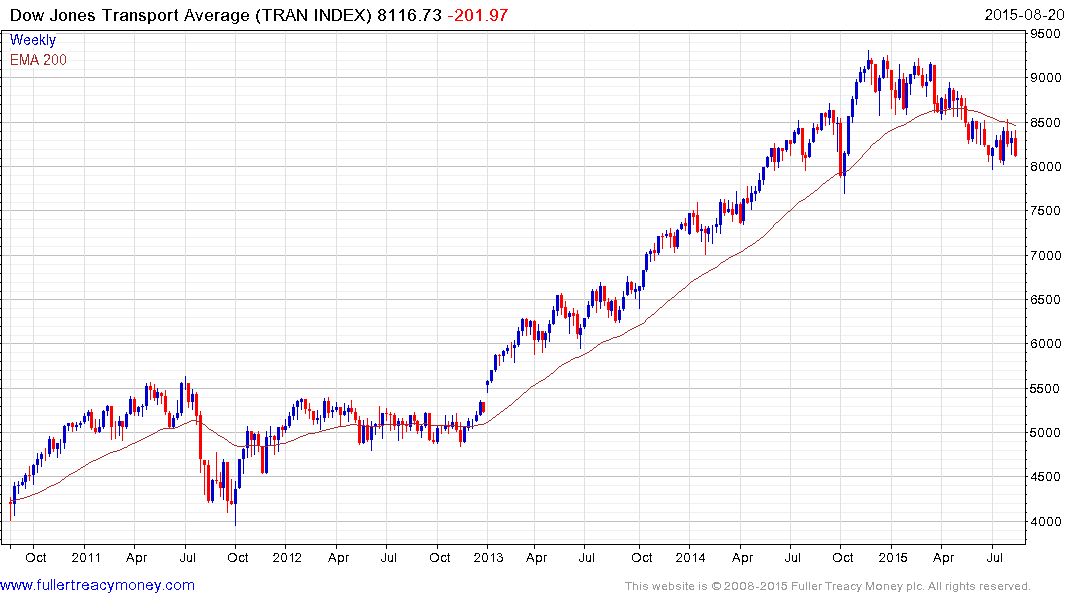 The Dow Jones Transports Average led the initial decline by peaking a full six months ahead of the Industrials Average. It steadied in the region of 8000 from early July but encountered resistance in the region of the trend mean from early August. The Average will need to hold the July low to offset distribution below the top characteristics. 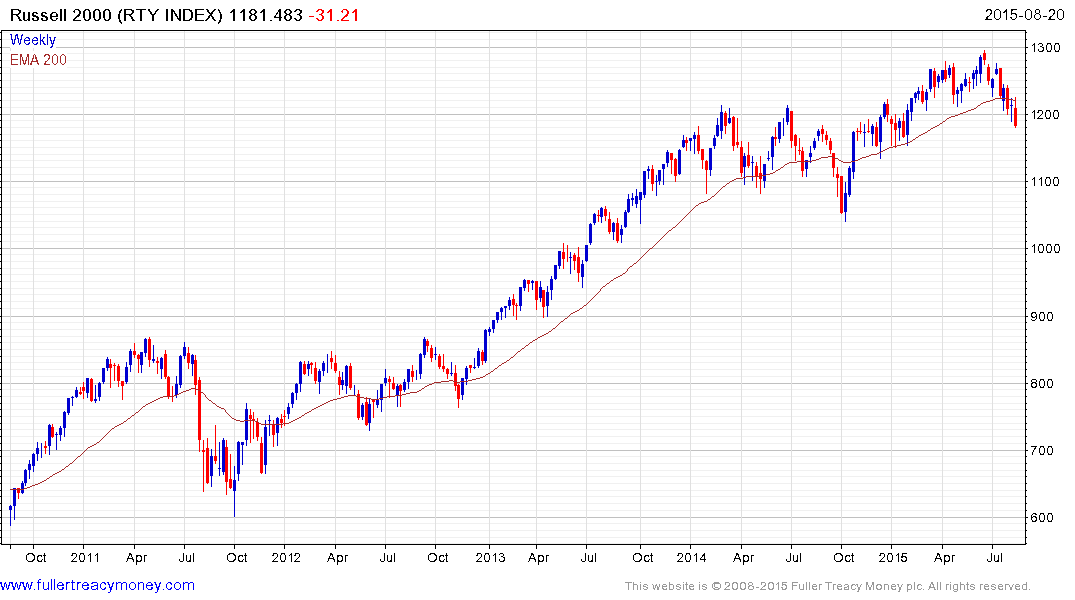 The Russell 2000 failed to sustain the breakout to new highs in June and dropped back to test the lower side of the underlying trading range. It encountered resistance in the region of the trend mean from last week and a sustained move back above it will be required to question current scope for further test of underlying trading. 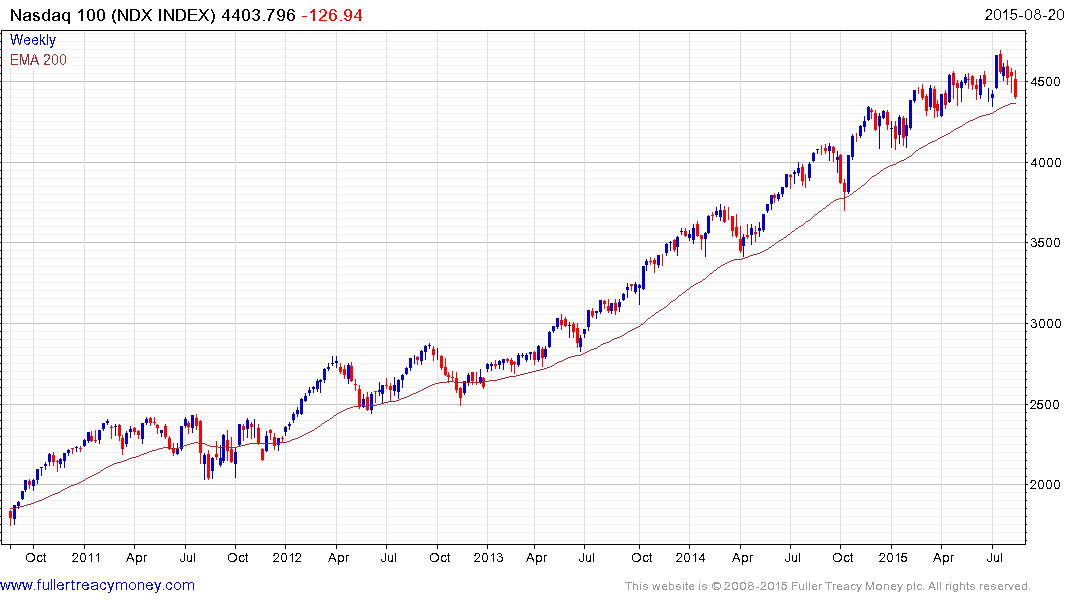 The Nasdaq-100 remains a relative outperformer but has now pulled back to the region of the 200-day MA. If the medium-term progression of higher reaction lows is to hold it will need to find support within the next 90 points. 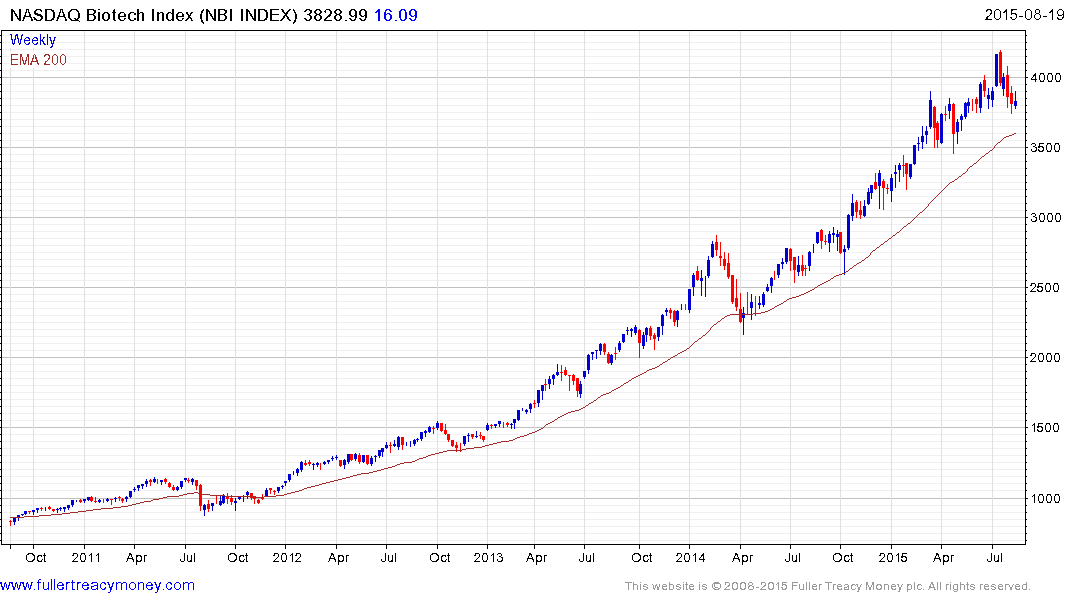 The Nasdaq Biotech Index has broken its progression of higher reaction lows as it continues to revert towards the mean. Even if it finds support in the region of the MA a period of support building would probably be required before a sustained move to new highs could be sustained.