Hi, what would be your comment on the following report from these people who were right more frequently than not:
https://panteracapital.com/blockchain-letter/five-orders-of-magnitude/

Thank you for this article which may be of interest to the Collective. Here is a section:

For every million new users, the price of bitcoin rises $200.  It happened every time except for February 2016, when the price was slow to hit.

The rise in the price has been amazingly constant.  I’ll leave it to some future Avogadro to figure out exactly why.  The important point is:  If this relationship holds, bitcoin will hit $200,000 in 2022.

I realize that sounds like a large caveat – but these relationships have held for a decade.  The compound annual growth rate (CAGR) of bitcoin has been 213% for more than ten years.  $200,000 a year from now would be exactly 213% higher than today.  It would be just normal trend growth.

The best time to buy bitcoin is around a year before the halving of the reward for mining (halvening). The last one was almost a year ago and the next will be in about three years. After the halving of the reward, the limited supply argument is burnished because it becomes twice as expensive to mine new coins so the need for additional resources increases while the value of coins already in existence inflates. That’s exactly what we have seen after every other halving and there is no reason to believe that will not persist. 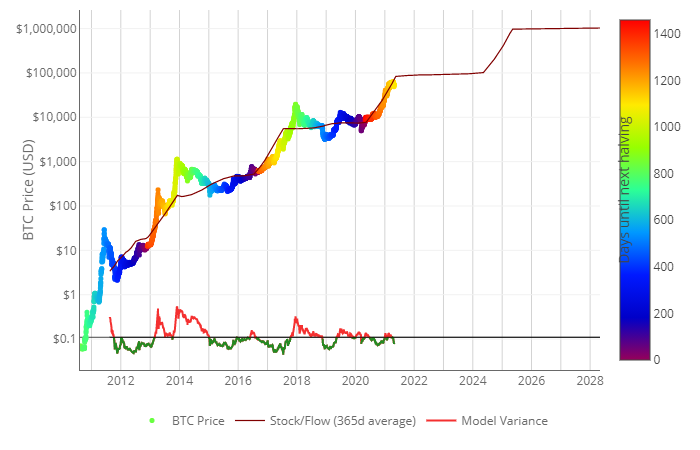 A subscriber introduced me to price-to-flow charts in early March. They help to graphically illustrate the four-year cyclical nature of the price moves and the tendency to both overshoot on the upside and the downside. The big peaks in December 2013 and December 2017 occurred with around 1000 days before the next halving event, which is about where the market is right now. It suggests a significant peak is likely within the near three months or has already occurred.

The inconsistency that has crept into the chart for bitcoin over the last two months is a clear signal that the relationship between supply and demand has changed. Bitcoin rebounded impressively again today and it is now testing the region of the 50-day MA. If it can hold a move above $57,000 that suggests this loss of consistency is a softening up process at the penultimate high. Bitcoin trading tends to be very active over the weekend and this one is likely to be more active than most.

By buying today one is betting on a blow-off climax like we saw in 2013 and 2017. Maybe that happens this time too and maybe the price will not ultimately peak until December. However, a crash would also be inevitable afterwards which could take the price back towards the 1000-day MA ($11,800 today). That kind of binary bet a run to $150,000 or a decline to $15000 is more gambling than investing. 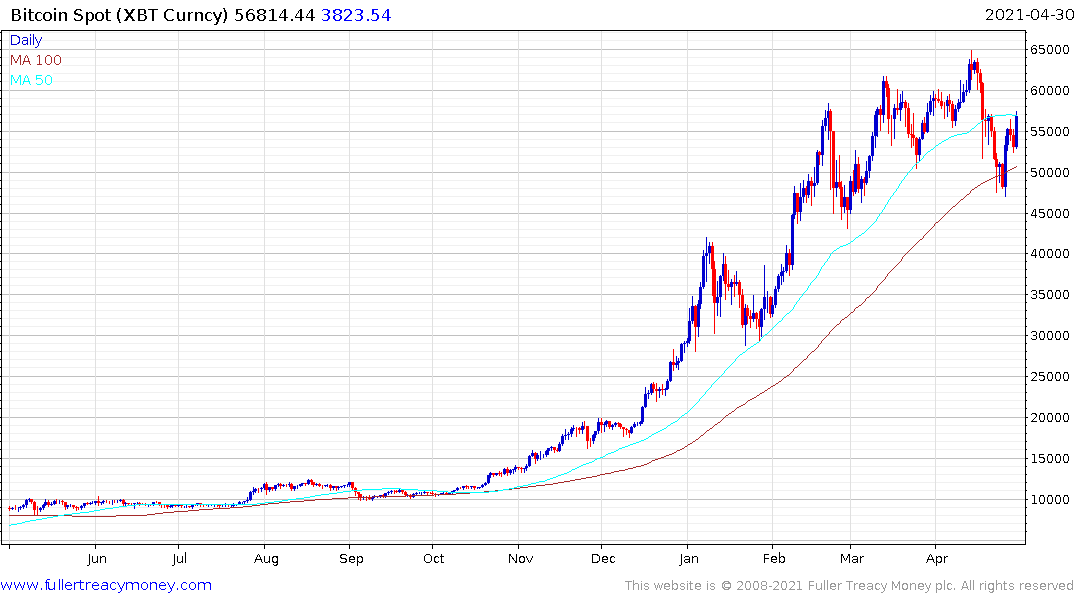 The time to back a buy and hold strategy is when the price is low and it is not popular. The time to think about taking profits is when prices are high and everyone is celebrating buy and hold. That’s just how markets work. Bull markets are powerfully acquisitive. They suck in buyers from all over the world and prices tend to rise beyond the imagination of even the most ardent bulls. Eventually everyone who wants it has bought and all that are left are potential sellers.

The risk in the market is much higher now than it was a year ago. A $1 trillion market cap is substantial and the higher the price goes from here the greater the quantity of new money required to sustain the trend. With global government spending plans ramping higher that might not be a short-term issue. A face-off with the green lobby also appears inevitable since most bitcoin is mined using power from coal fired power stations.