Happy and prosperous New Year to you and David and all the staff at “Fuller Tracey Money”.

I compliment you on the outstanding “Year-end Big Picture” video.  Your assessment of the interaction between the social, political and financial considerations is particularly insightful and gives me, and all your readers, a firm base on which to plan our investing for 2018.  Towards the end of the video you discussed the inter-relationship between AI and big data.  You said health care and biotech sectors would be major beneficiaries of these developments.

Only today I read a comprehensive “Seeking Alpha” biotech sector report which may be of interest to readers.

Thank you for your kind words and I’m delighted you enjoyed the yearend video. At The Chart Seminar, I spend a good deal of time on the first day talking about the dangers of myopia when looking at markets. This is even more important when we have open positions that we monitor on a daily basis. It is too easy to focus only on what we own and to fall into the temptation of thinking we understand everything about them because we are looking at them every day. That is why when analysing any market, we recommend starting with as much data as you can get your hands on. A long-term chart tells us instantly whether we are in a secular bull or bear market. My resolution in 2018 is spend more time focusing on long-term charts.

There are two big topics in the field of healthcare and biotechnology. The first is drug discovery and the second is getting permission to sell what you have created.

The healthcare sector represents a seam of data that is almost unimaginable in its complexity. The microbiome of bacteria, fungi and viruses that makes up a good part of our physical wellbeing contains more than three times as much genetic data as the human genome. Mapping the brain has never been achieved because the scope of the data and storage required is greater than all of Google’s capacity and that is only for one brain. Last year work began on synthesising the human genome. That means writing a full human genome from scratch. It’s as big a challenge as the original human genome project but infinitely more complex.

These are massive projects would have been impossible to consider attempting previously because the computing power and algorithms to process the information simply did not exist. That is all changing now and the evolution of big data brings a whole realm of difficult questions into focus. Longer-term the creation of quantum computers will bring probability modelling into a completely new sphere of study and healthcare will benefit from that as well.

The portion I found most interesting from the article you attached relates to the increased likelihood of drug approvals:

This year, we saw the appointment of new FDA commissioner Scott Gottlieb. Since that time, the FDA has been more flexible to accept NDA submissions for drugs deemed previously not ready for submission (more trials were needed). There have been three such examples since the appointment of Gottlieb with the most recent being Amicus Therapeutics' (NASDAQ:FOLD) migalastat, which might have otherwise spent additional years in trials. A higher number of drugs being submitted to the FDA might logically convert to a higher number of approvals than ever in 2018.

Changes in how drugs are approved represents the removal of a headwind for smaller development stage biotech companies which is particularly relevant for immuno-oncology and genetics companies. 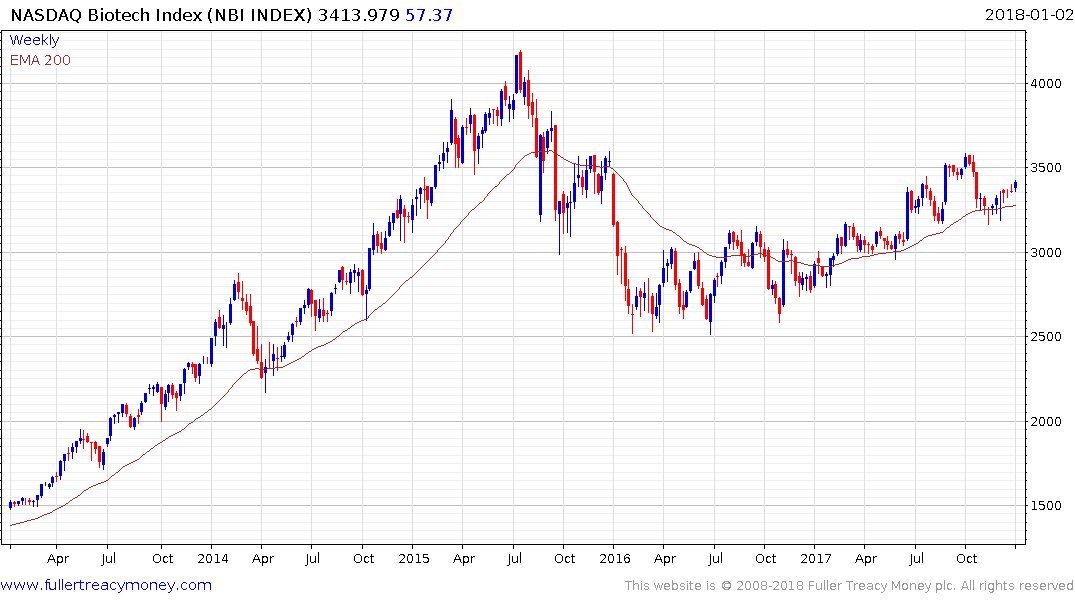 The Nasdaq Biotech Index is currently firming from the region of the trend mean and a sustained move below it would be required to question medium-term scope for additional upside. 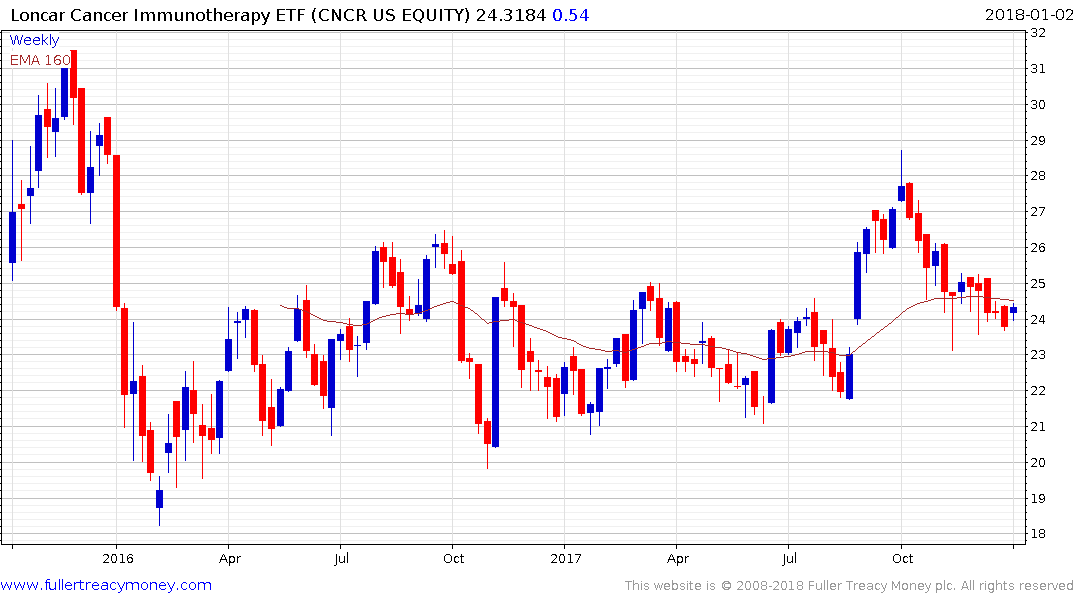