Email of the day on Italy
Comment of the Day

Email of the day on Italy by Eoin Treacy

I have read with interest many comments regarding the difficult situation that has developed in Italy, and I feel I have to make a couple of points which I hope will help clarifying some aspects of it:

1/ of the 2 so called populist parties (Lega and M5S) only the former had an explicit anti-EU bias during the election campaign, while the latter had moved to a pro-EU stance; the alliance formed past the elections included a marked anti-EU stance (specifically through the appointment of an anti-Euro candidate to the Ministry of Finance); This is of course unacceptable (the coalition has no anti-EU mandate), hence the decision to appoint someone else with a short mandate to take the country to new elections where Italy's position in the EU is openly and explicitly debated. Was an anti-EU coalition to be elected of course they would be in power, there is no shadow of doubt about that. So, no democratic deficit here, in fact there is an extremely robust democratic process in place.

2/ There is no doubt the current events are an existential threat to the Euro area; it will be difficult to navigate, as a "quitaly" would have an extremely dramatic impact on the lives of many people in the country. I hope qualified majorities will be required to take the most important decisions, but given the pressure from financial market I doubt it will be possible; on the other hand, was a government to unilaterally pull the plug on the Euro and re-introduce the Lira, I think it would be nothing short of a coup.

With no further EU reforms, I think the spreads we have seen opening between BTPs and Bunds are deemed to stay. The ECB won't add additional risk to that already present into its balance sheet. However, I do not see how any reform could take place given the current anti EU climate. I am very pessimistic.

Finally, 2 interesting articles I wanted to share with you, one from the FT suggesting there is convenience for leaving the Euro (I share this view 100%, completely absurd), and another suggesting some reforms the EU could do. I hope they can be of interest.

Here is a link to the articles from the FT mentioned in the above email. 1. 2.

Thanks for this educative email. I found the analysis of the competing desires of the League and Five Star Movement to be highly instructive. I agree there is an internal conflict between an openly Euro-sceptic party and one which wishes to remain inside the EU, but the Italian president is taking a serious risk in shooting down the proposed candidate for finance minister. 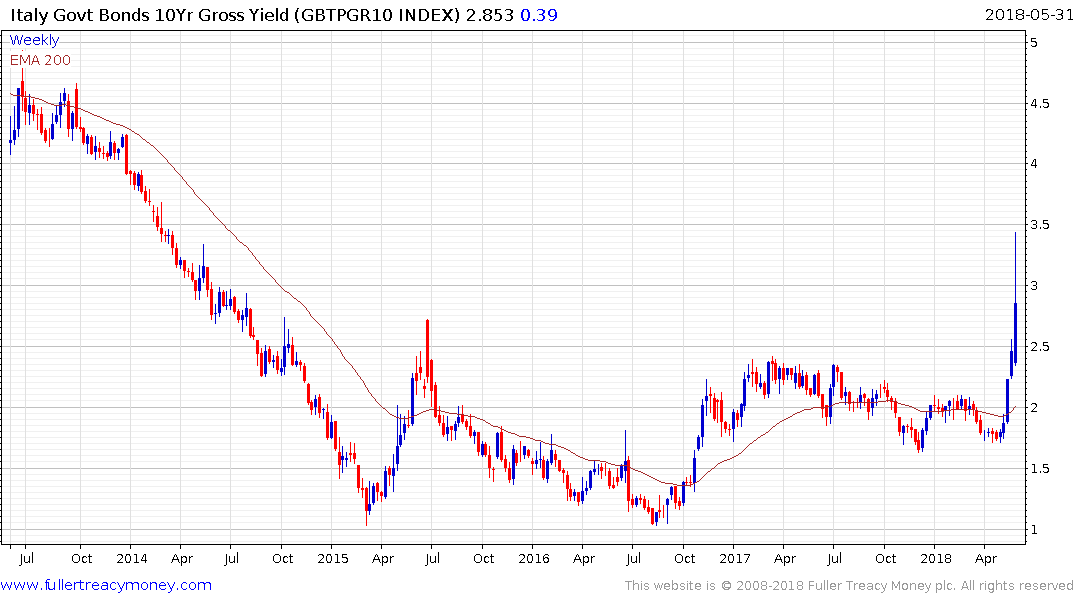 Italian bonds yields have pulled back from the peak posted on Tuesday, but the breakout has ben sustained and the most likely scenario is for further expansion as the full ramifications of the uncertainty evident in the evolving situation is more fully explored by investors. 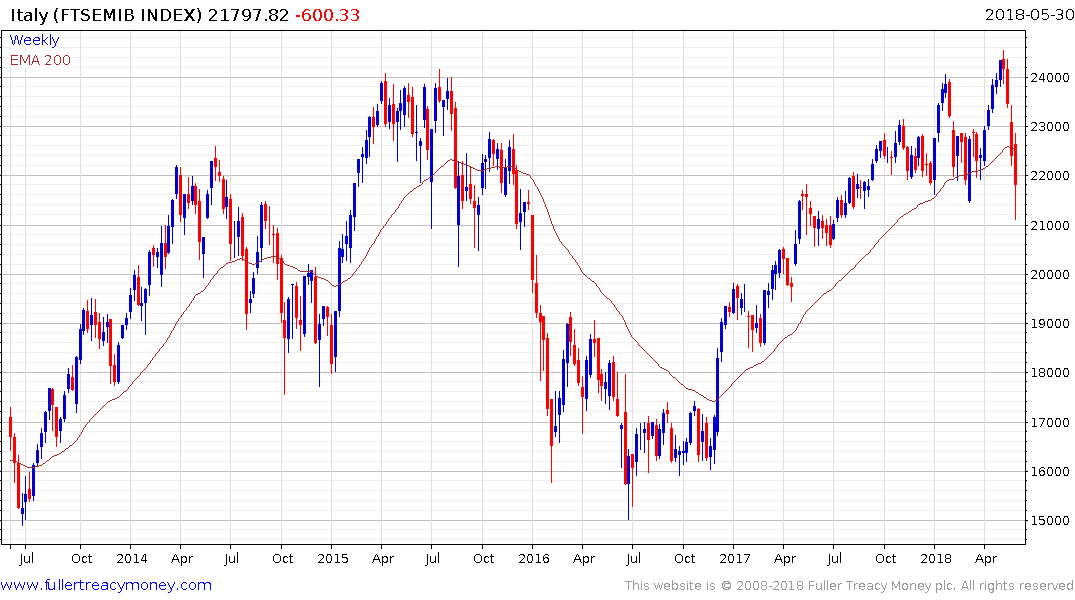 The Italian stock market has paused in the region of the lower side of the range evident since September but a sustained move above the trend mean will be required to signal a return to demand dominance.