Eric Basmajian has much to say about the dominant deflationary forces of the past 40 years and how the recent monetary and fiscal policies are more likely to add to that problem by suppressing the velocity of money.  Most of us, more or less, understand that argument.  He then, surprisingly, includes gold in his recommended portfolio because of falling real interest rates in either deflation or inflation.  All very difficult for average investors to comprehend. Your view would be appreciated.

Thank you for this article and question which may be of interest to subscribers. It’s a common misconception that gold only does well during bouts of inflation or deflation. Instead, it’s really all about negative real interest rates.

During the inflationary spiral of the 1970s, inflation ran ahead of the willingness of central banks to raise rates. When Paul Volcker aggressively raised rates to kill off inflation, real rates finally went positive that deprived the bulls of their primary argument for increasing holdings for gold.

The massive investments in supply of gold during the 1970s contributed to oversupply right about the same time that real rates went positive and the market experienced what is called a triple waterfall bear market where everything that could go wrong did go wrong.

In the early 2000s interest rates were held artificially low following the TMT crash and 9/11. China’s massive demand for commodities spurred demand and as they rose from a low base inflationary pressures picked up. A limited supply response and negative real rates spurred that advance. Meanwhile the under reporting of inflation from official statistics has been a pervasive issue over the last twenty years.

Over the last three years, the willingness of the US government to run procyclical fiscal policy, stimulating with an economy already at full employment, has stoked investor concerns about the purchasing power of the Dollar. As soon as the Fed cut rates in July 2019, gold picked up and has rallied about 20% to date. The rationale is the same. Massive monetary and fiscal stimulus are contributing to negative real rates.

Inflation is being actively courted by boosting the supply of money into a falling velocity of money scenario. That’s not inflationary in the short term because if money is not moving it can’t be inflationary. However, even a modest uptick in economic activity will raise inflationary pressures and highlight just how wide a gap there is between low interest rates and potential for inflation.

The only way governments, everywhere, are going to get out of their debt mountains is through massive currency devaluation. China’s testing of a parallel digital currency is the first step in preparing for rebasing debt and it will certainly not be the only country that deploys this kind of action. That is why I continue to describe gold as the barometer against which the purchasing power of fiat currencies is measured. 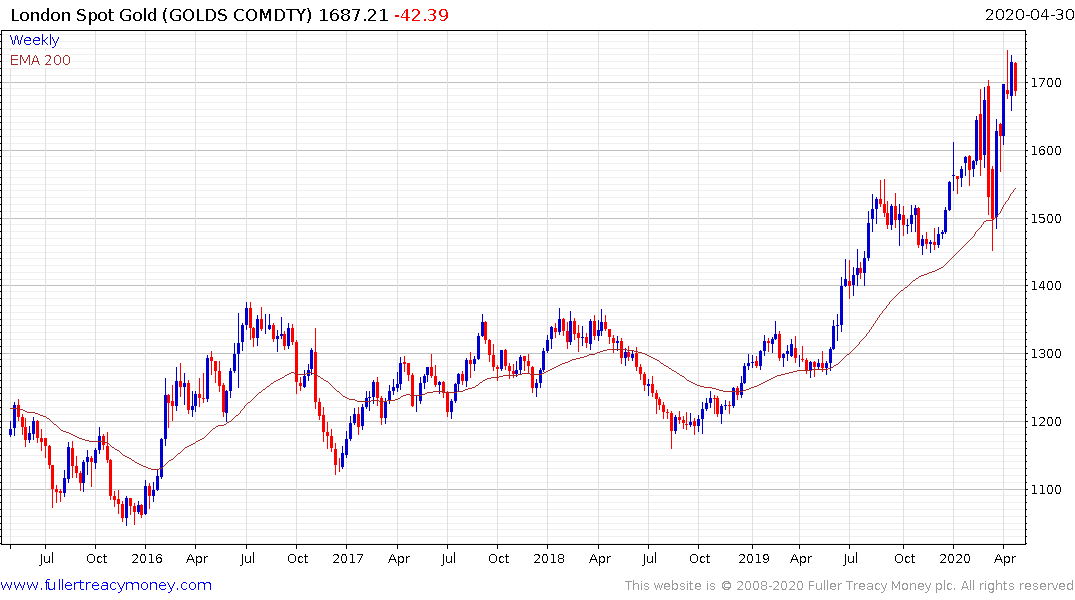 Against that bullish overall backdrop, it is important to remember gold is a volatile market and it is best bought once support has been found following inevitable pullbacks.