“The new formulation removes any possible ambiguity and resolutely conveys that 2% is not a ceiling,” President Christine Lagarde told reporters in a press conference, adding that the strategy review was agreed unanimously. “What we want to do is to avoid the negative deviation that will entrench inflation expectations.”

The outcome “can be perceived as net dovish in the short-term,” said Ima Sammani, FX Market Analyst at Monex Europe. “The new symmetric inflation target gives the central bank ample room to run accommodative monetary policy for longer without having to fight markets.”

Still, the euro gained after the announcement as traders perceived the ECB’s new strategy as less aggressive than the Federal Reserve’s flexible inflation targeting. The common currency was up 0.5% at $1.1848 at 2:42 p.m. Frankfurt time. It’s fallen from around $1.22 a month ago.

On climate change, another controversial topic for some central bankers, the institution said it will now include considerations on that matter in its monetary policy operations. Meanwhile officials also said they will start considering owner-occupied housing costs in their supplementary measures of inflation.

The big question for any central bank is how to do control inflationary expectations? In many cases the simple answer has been to change how they measure it.

If you are worried about inflationary pressures overshooting all you have to do is take commodity prices out of the calculation. You can go one further and remove property prices too and replace them with an estimated rental value instead. That’s exactly what central banks have been doing for the last forty years.

They were worried about inflation so they made sure it did not show up in statistics. The result was they massaged away perception that inflation was a problem and acted accordingly. The market followed suit.

Today they are a lot more worried about deflation that inflation. Therefore, the big question for investors is whether including carbon prices and raw house price data will be inflationary or deflationary for economic statistics. My guess is that including what are effectively energy and property prices into the measure inflation will once more appear in economic statistics as if by magic. 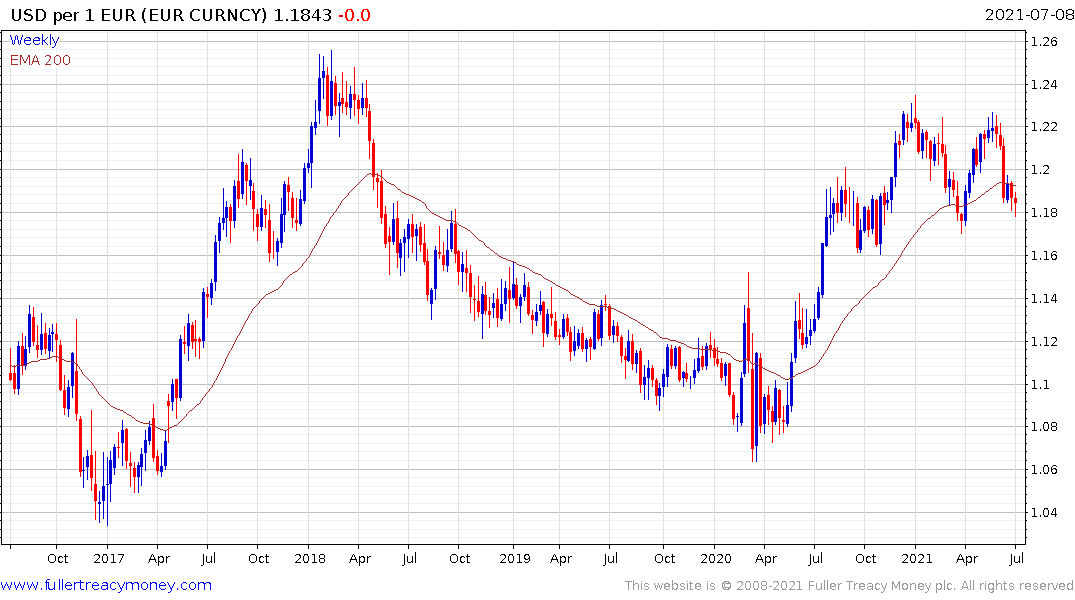 The Euro rebounded today from the region of the March low because even this momentous change by the ECB was not enough to rival the inflationary bias of the Federal Reserve.

However, the stock market was weak because investors are not satisfied the Fed is being aggressive enough in supplying the liquidity required to inflate asset prices.

This is an odd scenario but the simple fact is liquidity is king. As central banks think about tapering, they are not thinking about increasing assistance. The stock market is taking that into account.

Thanks to Iain Little for this edition of his Global Thematic Investors’ Diary. Here is a section on liquidity:

Michael Howell of CrossBorder Capital in London sings a similar song. Global liquidity, his major field of study, peaked in Q4 2020. 6 to 7 months later -that’s now- you can expect a slowdown. Asia and China are slowing. So is Germany on today’s figures. The Reserve Bank of Australia is already tapering bond buying (reverse QE by another name). Howell admits that supply chain disruption may cause higher prices, but the trend is clear. 85% of QE has come from 2 central banks: the Fed and the ECB. Watch them closely, but take some remedial action in portfolios. This is not a recession. It is a slowdown. Abundance of debt will not allow rates to rise much. But with debt this big, liquidity is needed all the time to feed it and, thus deprived, equities will struggle.

The Equal Weight Nasdaq firmed today from the region of the upper side of its underlying range. Provided that continues, the benefit of the doubt can continue to be given to the upside. 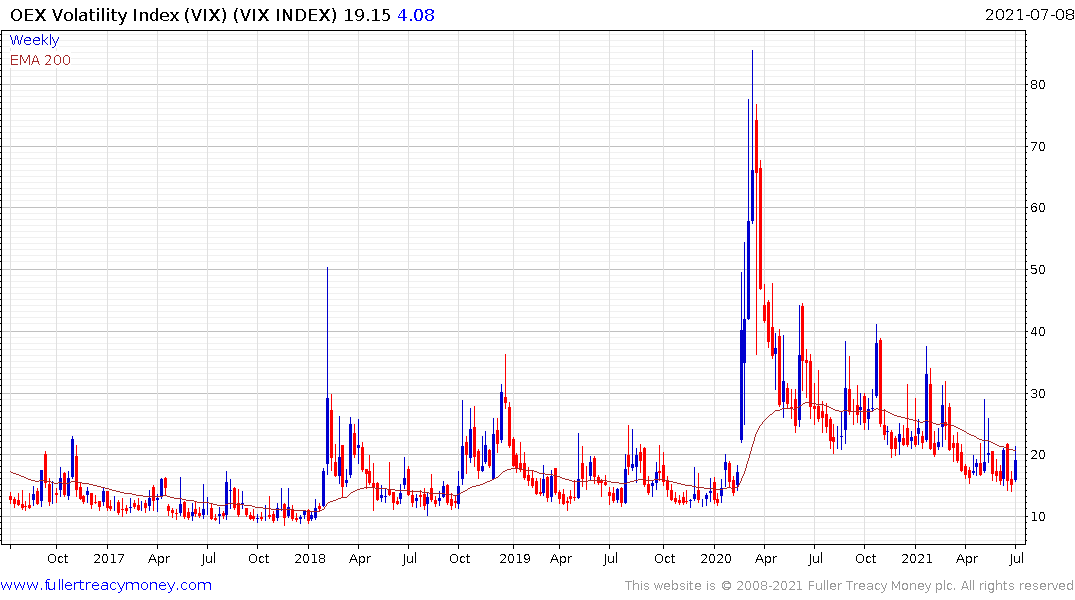 The one factor that has been common to every mild pullback this year is that volatility initially spikes and fades subsequently. That was seen again today and the trend lower in the VIX remains intact. 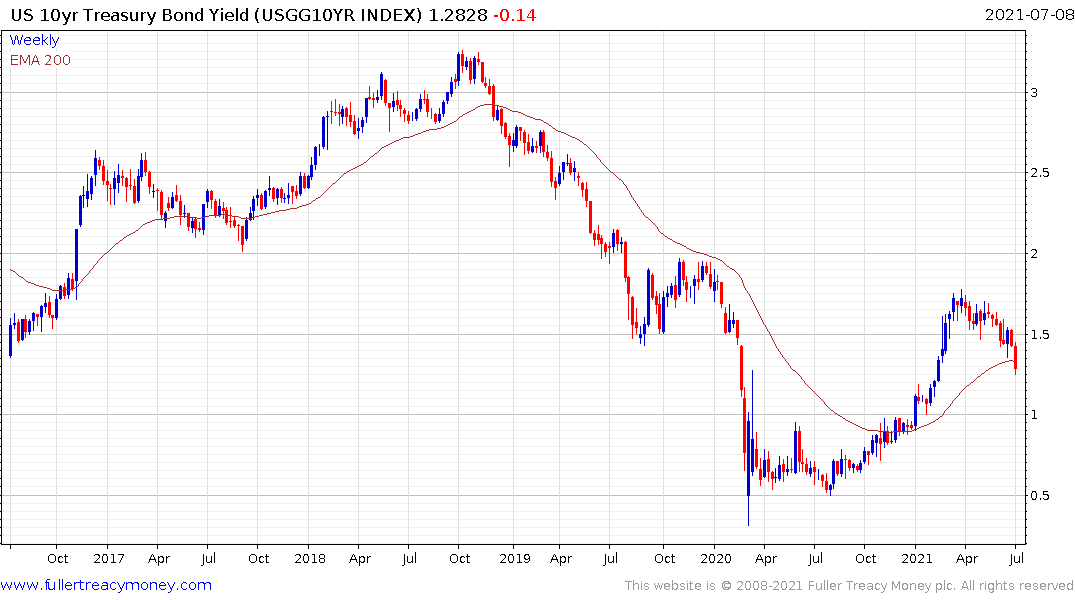 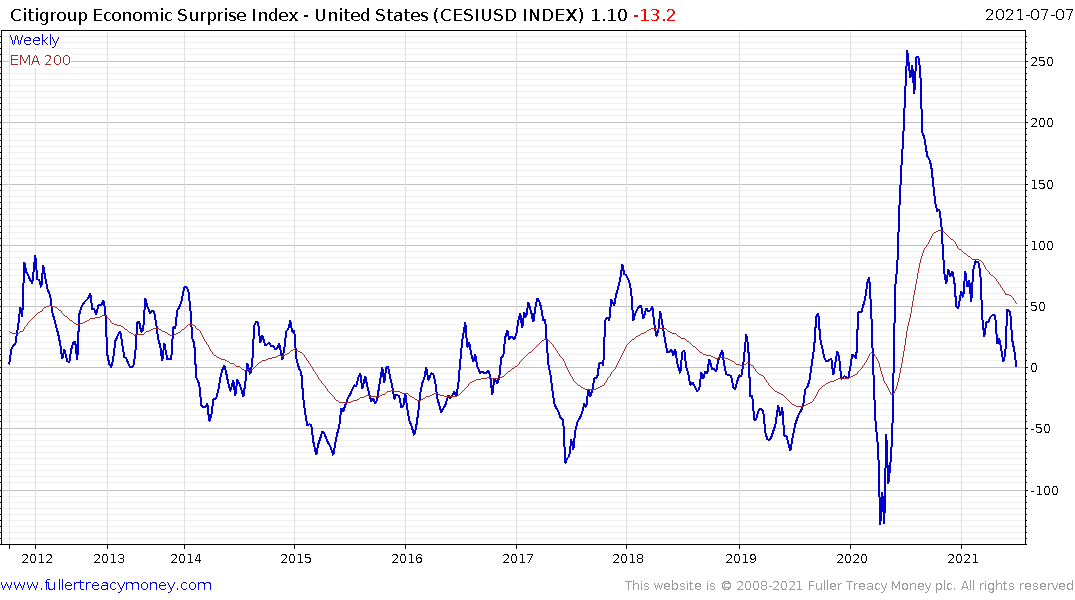 The one thing that strikes me today is how bearish everyone was about bonds in early April. Since then, a gradual reversionary rally has taken place. Today, we see significant sums moving into bond ETFs amid lower supply and economic stats which have not met expectations. Many believe the worst is now over. Meanwhile bonds are short-term overbought and susceptible to at least some consolidation.