China with Dave by Eoin Treacy

The reason why growth is not sagging further is because the largest economy, by far, is actually in acceleration mode. This the US., which even after the ascent of China and Emerging Markets still commands 25% of global GDP.

Not just that, but 90% of this economy is pure domestic and acts constantly as the relief valve for global producers. The U.S. runs trade deficits of over $500 billion annually with the rest of the world or 3% of its GDP. As a measure of how the U.S. shares its consumer base with the rest of the world, consider this it imports 50% more than it exports (if only Germany did that for the Eurozone as in play the role of consumer of last resort – eliminating its record current account surplus would be a huge remedy for the region’s chronic economic imbalances).

So yes, as we saw in the prior Asian crisis of 1997/98, it is not about whether the rest of the world can drag down the autonomous and mostly service-sector oriented U.S. economy; it is about how the $15 trillion U.S. domestic demand market can act as an antidote to the woes in the overseas economy.

The synchronised global economic expansion that prevailed ahead of the credit crisis is a distant memory, but as the above report points out the world is not in a period of synchronised global economic contraction either. China is not growing as fast as it once was but it is growing and India is a major beneficiary of lower commodity prices. Emerging markets and commodity producers are under pressure but Europe is steady and the USA is growing.

The relative strength of the US Dollar represents a major headache for emerging markets as the cost of servicing US Dollar denominated debt rises. This is particularly troublesome because the Dollar had been so weak for so long that borrowers had become complacent about the risk. However, let’s not forget exports are quickly getting more competitive. Some might argue imports are also getting more expensive but since these are mostly export oriented economies the competitive edge is more important over the medium term. 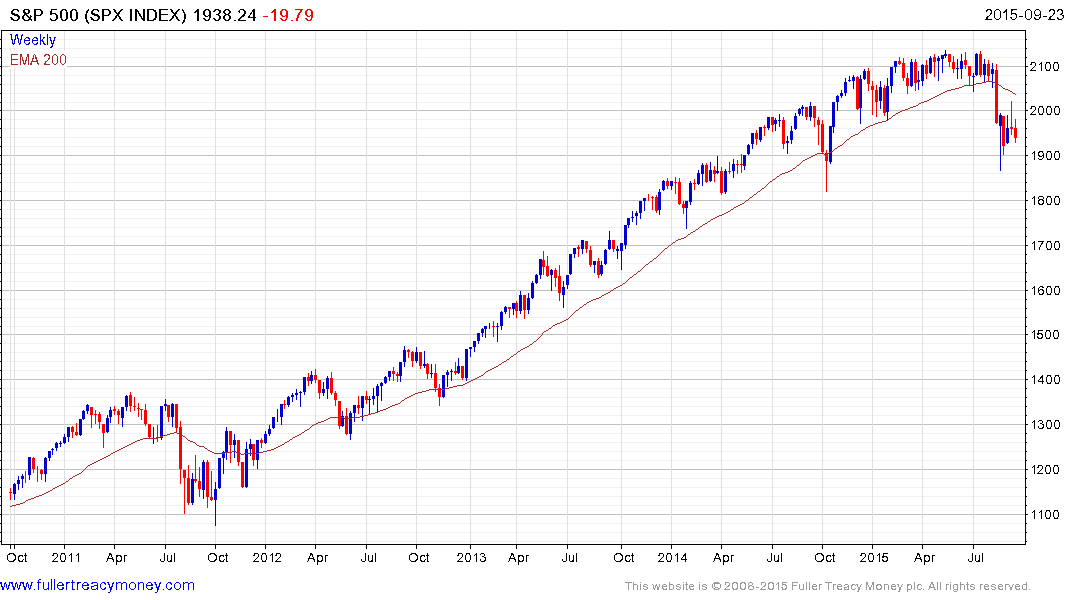 We have long described the medium-term uptrend on Wall Street as liquidity fuelled. When the Fed finally ended its QE program a year ago, the S&P 500 began to lose momentum. The transition from a market reliant on easy access to cheap credit to a more normal situation could be potentially lengthy and the medium-term uptrend has definitely lost consistency. That does not mean a rehash of 2008 or 2000 is in store but increased volatility and a lengthier period of consolidation is definitely possible considering the continued uncertainty surrounding Fed policy.