China’s economy fell short of expectations and its central bank chose not to follow the Federal Reserve in raising borrowing costs, adding fresh caution on the outlook for global growth as trade tensions with the U.S. escalate.

With President Donald Trump renewing threats to impose tariffs on the world’s second-largest economy, May data for industrial output, retail sales and investment all came in beneath economist forecasts on Thursday. The People’s Bank of China kept the cost of reverse-repurchase agreements steady, defying predictions it would track the Fed’s hike of Wednesday.

Investors now face greater uncertainty over what had been the strongest global upswing since 2011. That doubt is set to fester after Trump said on Wednesday that he’ll confront China "very strongly" over commerce in coming weeks. His administration is scheduled to announce a new list of duties on Friday.

"A slowing China will add to the challenges for the global economy," said Louis Kuijs, chief Asia economist at Oxford Economics in Hong Kong and a former International Monetary Fund researcher. "Until recently, the resilience of growth in China was an important buffer for the global economy in the face of headwinds from trade friction, slower growth in Europe, higher oil prices and issues in various emerging markets."

Both industrial output and retail sales rose less than expected in May compared to a year ago. Fixed-asset investment growth in the first five months was the slowest since the data began in 1999, as was the investment in the services sector. The decade-long decline in investment has intensified this year, as policy-makers act to reduce leverage at state-owned companies and local governments. While that’s a deliberate policy, officials risk a worse-than-desired deceleration in growth.

China might not have raised interest rates but it is definitely leaning on the shadow banking sector which is the effectively withdrawing capital from regional banks. At the same time, it is allowing defaults to occur. There have been as many defaults so far in 2018 as in all of 2016, which was the previous peak level of 21.

The big question every should be asking and we cannot know the answer to is what is a normal default rate for China? Is it 5%, 10% some number in between or even higher. The benefit many developed countries enjoy is they have had well-established corporate bond markets for decades so it is possible to make some calculations based on probable default risk. That is not possible with China because the corporate bond market is relatively underdeveloped and investors have been protected from defaults until now. That is another reason why China deserves an additional risk premium. 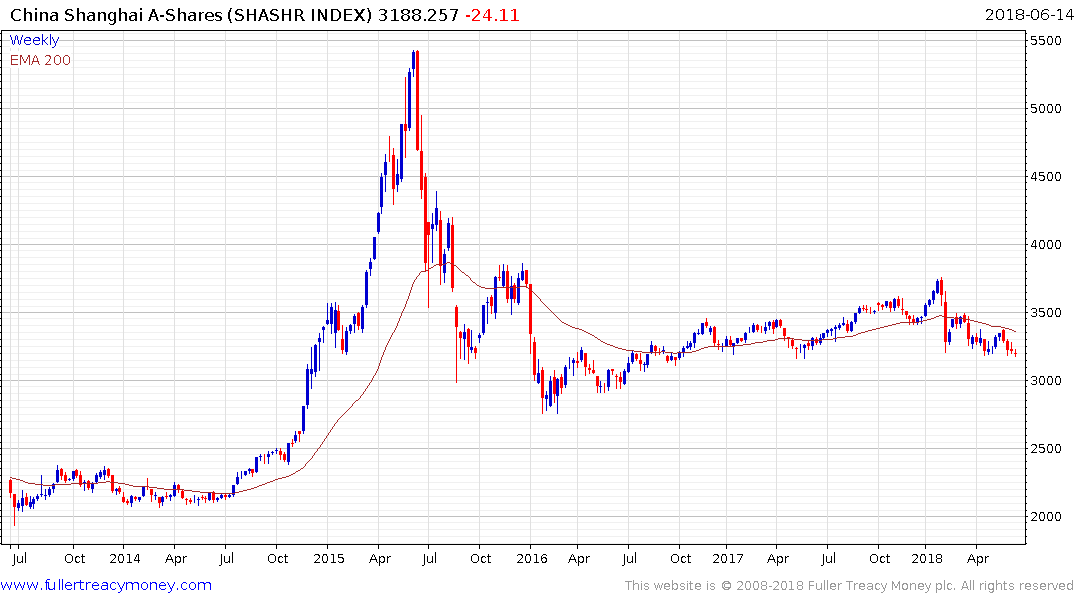 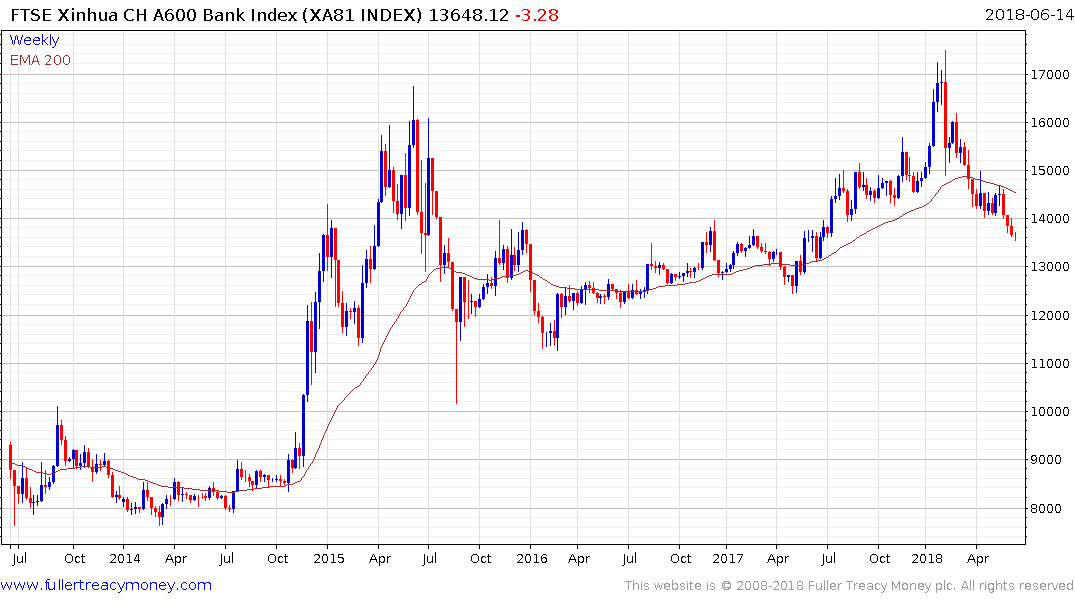 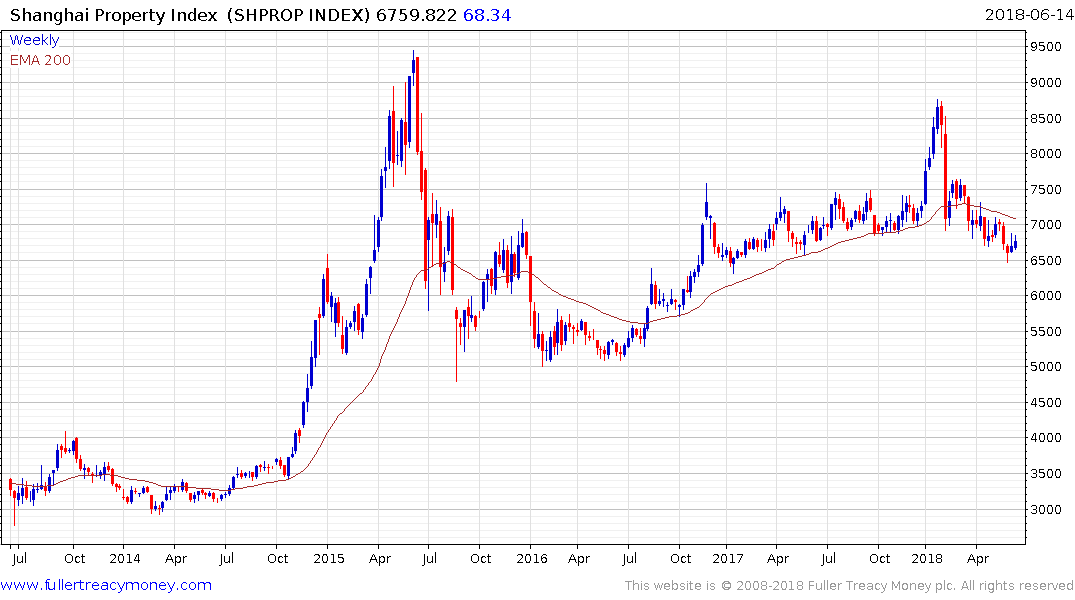 The Banks and Property indices continues to hold progressions of lower rally highs while the Shanghai A-Share Index has so far struggled to hold the low near 3200. Clear upward dynamics and breaks in their multi-month downtrends will be required to question the medium-term downward bias. 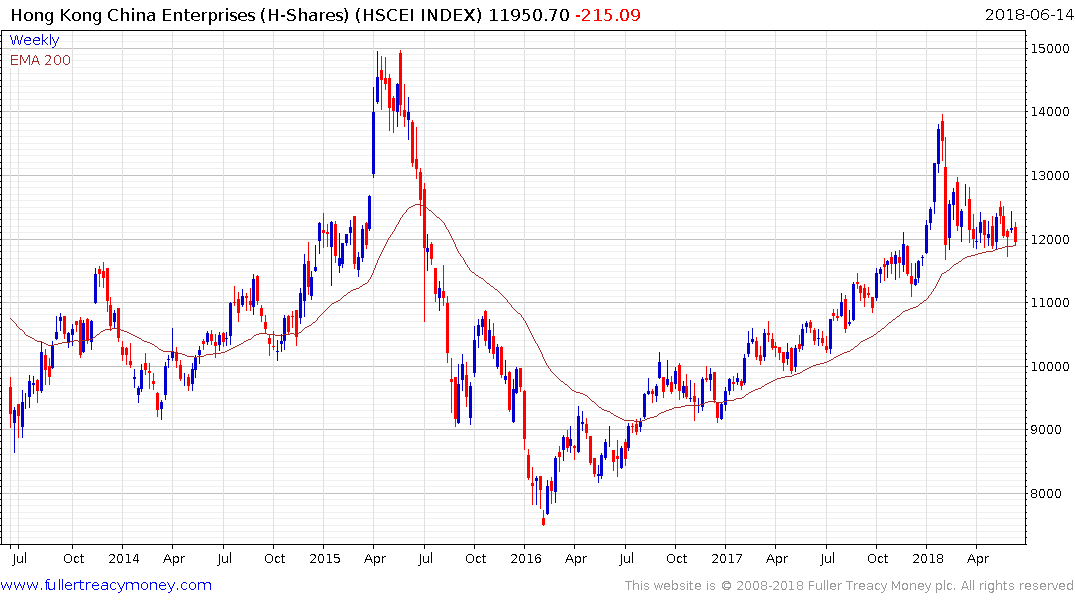 So far, the China Enterprises Index (H-Shares) has held the 12,000 level, which coincides with the region of the trend mean. A sustained move below that level would signal a significant break of the medium-term uptrend.