What is CECL?: CECL is a new accounting standard that modifies how companies estimate loan and lease losses, and affects all periods starting after December 15, 2019 (i.e., begins 1Q20). In the midst of the financial crisis in 2008, the Financial Accounting Standards Board (FASB) and the International Accounting Standards Board (IASB) established the Financial Crisis Advisory Group (FCAG). FCAG believes it has identified a “weakness in current GAAP being the delayed recognition of credit losses that results in the potential overstatements of assets,” which ultimately led to its recommendation for this new standard. The new standard requires financial institutions to use a combination of historical information, current conditions and reasonable forecasts to estimate the expected losses over the life of a loan. This is a significant shift from the current methodology, which relies on incurred losses. We note on day one of implementation, there will be a balance sheet adjustment, creating additional general reserves for expected credit losses and negatively impacting capital levels, but implying limited income statement impacts.

Conclusion: We walked away with more questions than answers, and anticipate a significant amount of variability in disclosures amongst the banks given the latitude FASB has provided in the standards. While many questions remain, FASB officials, consultants and management teams alike continue to work through the issues and are refining models as overall understanding of the standards improves. Fortunately, we anticipate regulatory capital relief for the banks as necessary, since capital levels remain elevated and the intent of the new standards was not to increase capital levels at the banks. However, we believe there could be some unintended consequences and potential ripple effects that will create further disruption in the space, potentially shifting assets out of the banking space and into the non-bank space, which has continued to gain share. Ultimately, we remain concerned with the uncertainty around CECL, anticipated volatility around disclosures and capital impacts, as well as potential negative implications on industry demand will serve to provide one more reason for investors to not own the space.

The Current Expected Credit Loss (CECL) regime is another piece of regulation imposed on the banking sector which serves to ensure the overleverage and inappropriate risk management that characterised the industry ahead of the financial crisis is not repeated. One of the primary results of successive waves of regulation has been to pile compliance costs onto the banks but it has also reduced their ability to leverage their balance sheets which has unintended consequences.

Right now, the focus of attention is on the repo market where banks no longer have the liquid capital to arbitrage disparities. Increasingly they are also losing the skillset to perform this kin trading because of the closure of prop trading desks. The Fed has stepped in to provide liquidity and has increased the size of its balance sheet by more than $300 billion in less than two months to shore up the repo market.

That has closed the arbitrage between the Fed Funds Rate and Interest On Excess Reserves (IOER) but when we look at how the two measures have traded historically, the IOER generally trades at a discount to the Fed rate. That suggests even more liquidity is necessary to restore normalcy to the market.

One of the least reported on movements seen over the last decade is in growth of nonbank lending. Generally, the private equity sector is much less regulated, has very little reporting to do and is free to invest in the riskiest portion of the market. A simultaneous trend has been the growth of nonbank lenders in mortgage origination. These sectors have expanded beyond recognition over the last decade and have been among the greatest beneficiaries of zero interest rates and credit availability.

The growing trend of companies going public, after eschewing that capital raising avenue for much of the last decade is a signal the restriction in credit, until quite recently, was enough to prompt private capital to raise cash.

The Thomson Reuters Venture Capital Index is lagging the stock market at present but has been among the best performing asset classes in this bull market. 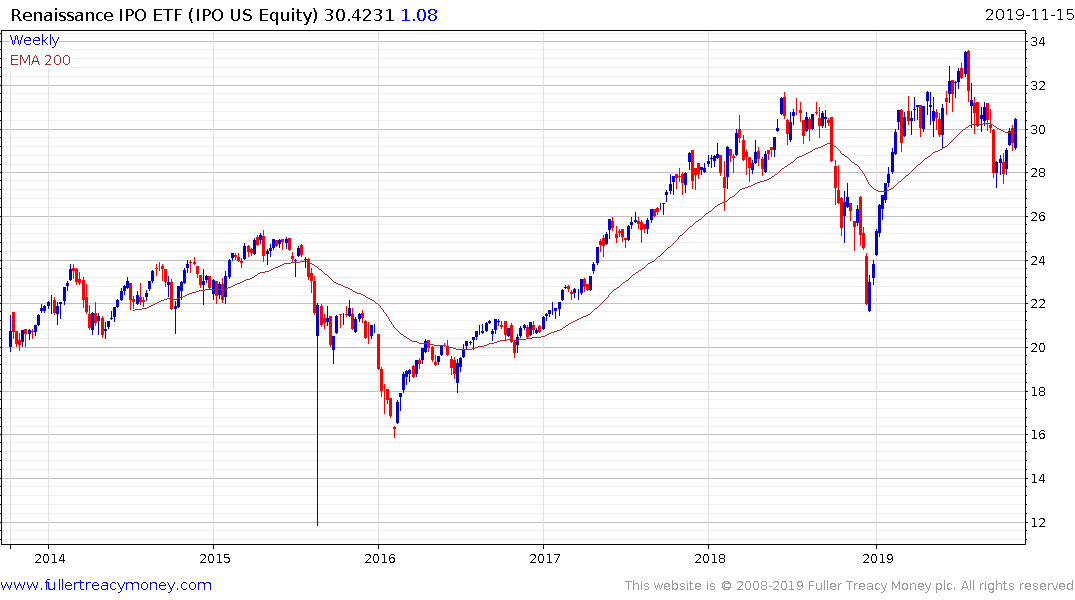 The Renaissance IPO ETF appears to be responding favourably to additional capital infusions by the Fed and is back testing the region of the trend mean. It needs to sustain a move above it to confirm a low of more than short-term significance.