“It is pretty obvious that with interest rates near zero and being held stable by central banks, bonds can provide neither returns nor risk reduction,” a team led by Co-Chief Investment Officer Bob Prince wrote in the July report.

Bridgewater’s famous All Weather portfolio has therefore been moving into gold and inflation-linked bonds, diversifying the countries it invests in and finding more stocks with stable cash flow.

The idea is to replicate the long-term positive returns typically generated by bonds while finding alternative ways to hedge a downturn in stocks, especially if higher inflation upends low-yielding nominal debt.

Risky Business
Bridgewater’s conviction that ultra-low yields are a game-changer for risk parity will resonate with many on Wall Street, who have also been fretting over the fate of traditional portfolios that allocate 60% to stocks and 40% to bonds.

According to the firm, about 80% of local-currency government bonds have been trading below 1%, which limits the room for such notes to rise in value during a bout of risk aversion since investors can simply hoard cash instead. That, combined with the potential for losses if yields jump from record lows, means that the world of government debt is potentially losing its function as a safety valve in portfolios.

Risk Parity is based on the correlation between rising stock prices and rising bond yields. The logic is that when investors are worried about stock market returns, they park excess cash in bonds. Over the years multiple strategies have evolved to size positions according to this correlation.

The challenge for risk parity as rate approach zero is alternative assets are either too small or much more volatile. Inflation protect securities is a comparatively small market where it is possible for a large fund to have an outsized influence. Meanwhile gold is much more volatile than sovereign bonds. 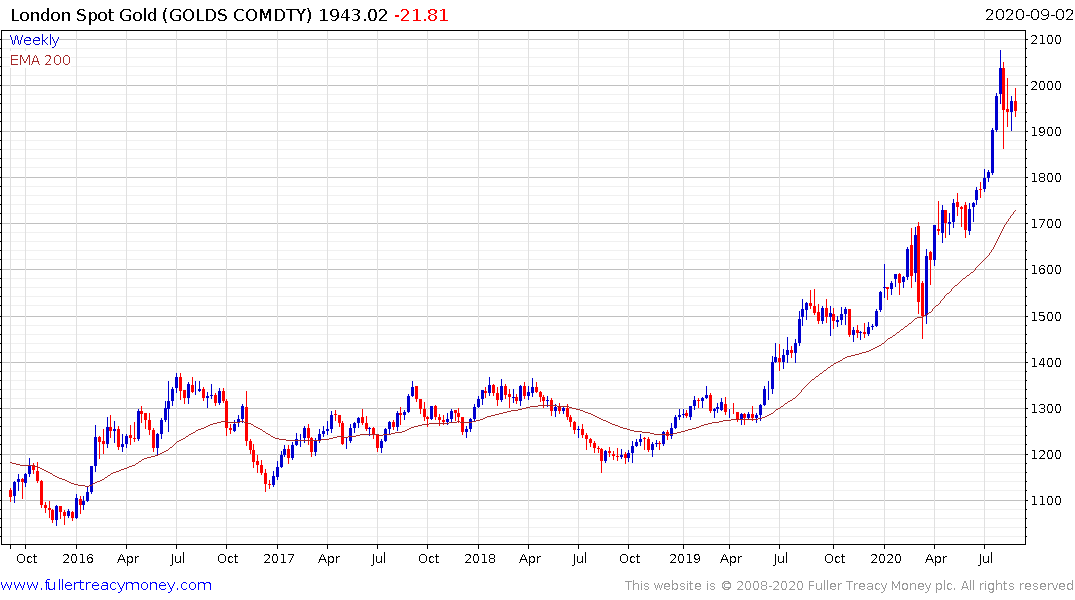 The gold price continues to hold the $1900 but there has been a downward bias to trading since the pear a month ago. The overextension relative to the trend mean is being unwound but it is worth remembering that these gradual ranges often end with a short sharp drop to complete the reversion. A very short-term downside surprise for gold can not be ruled out so I have introduced bids in the market which will triggered on weakness.