Brazil’s economy slipped into recession for the first time in more than five years as investments contracted on lower confidence before the October presidential election.

Gross domestic product shrank by 0.6 percent in the April- June period from the previous three months, after contracting a revised 0.2 percent in the first quarter, the national statistics agency said today in Rio de Janeiro. The contraction in the second quarter was bigger than the median estimate of 42 economists surveyed by Bloomberg, who expected a 0.4 percent drop.

President Dilma Rousseff has attempted to revive growth with tax cuts, billions of dollars in credit and higher social spending. With inflation hovering around the upper limit of the target range, consumer and business confidence eroded in the run-up to the first round vote on Oct. 5. It’s the first time the economy contracted for two consecutive quarters since the aftermath of the global financial crisis in 2008.

“This is the last thing that Dilma would have wanted, today’s data is the worst-case outcome for her,” Neil Shearing, chief emerging markets economist at Capital Economics Ltd, said by phone from London. “This is clearly going to put pressure on the central bank to loosen policy in order to support growth.”

In the bad news is good news department, the underperformance of the Brazilian economy increases the likelihood that Rousseff will not win the October election. Investors are betting that a victory by a pro-business candidate will boost stock market returns because of expected regulatory changes, not least a removal of the oil price subsidy.

At FullerTreacyMoney we have long spoken about how important an improving trend in the standards of governance is. “Governance is Everything” has long been a mantra of ours. The bull market in commodities and synchronised global economic expansion that presaged the global financial crisis papered over the cracks for a number of emerging markets, not least among autocratic commodity producers. The response of various countries to the challenges of deteriorating government finances has created a great deal of variability in the performance of stock markets.

Viewed from this perspective, the Arab Spring can be considered a failure of administrations to respond to the challenges posed by large young populations entering their key productive years. Russia’s recent aggression can be viewed as a failure to grasp the initiative to improve standards of governance rather than stoke nationalist fervour in an effort to distract the population from the dismal performance of the economy. India’s resounding vote for positive reform and optimistic step forward in terms of its standards of governance has been roundly welcomed by the international community. Indonesia’s new president does not have the same mandate but the desire to improve the lives of regular people and expand the middle class is similar.

What then will Brazil decide in October? The stock market is beginning to price in the possibility that the outcome could be very positive. The Bovespa Index has rallied to break the progression of lower rally highs that has been in evidence since 2010. We have pointed out the return to outperformance of Petrobras on a number of occasions. 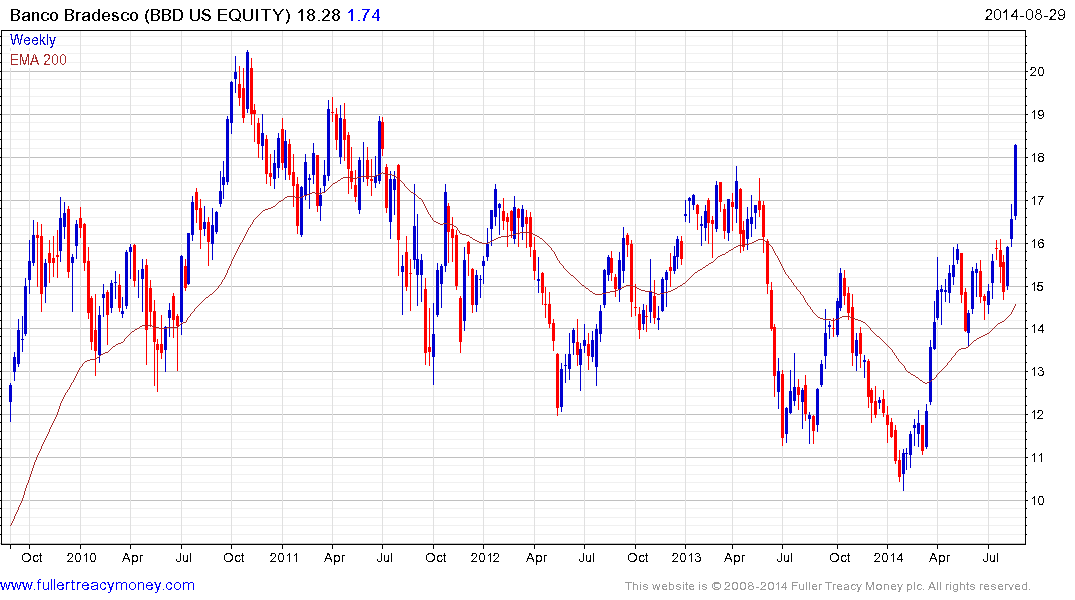 Banco Bradesco shares a similar pattern to the wider market.

In the Brazilian food sector both Brazil Foods and JBS are hitting new highs while Marfrig found support in the region of the 200-day MA last week and a sustained move below it would be required to question medium-term recovery potential. 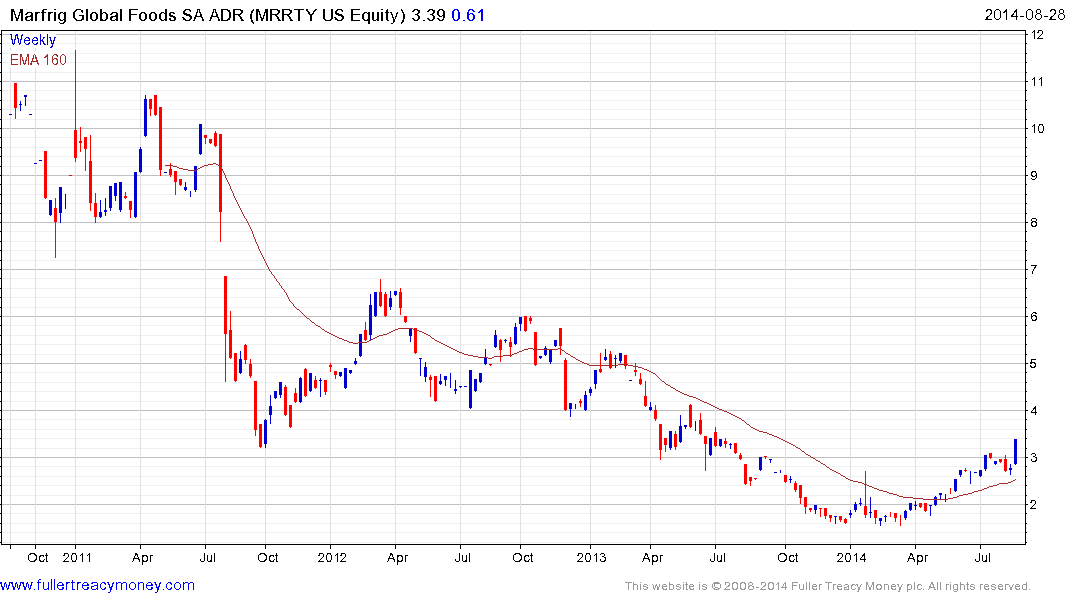