Prime Minister Theresa May’s government lifted the cap on pay for more than a million National Health Service workers on Thursday. They will get a 6.5 percent pay rise over the next three years -- spelling an end of the longstanding limit on public-sector raises -- while a 4.4 percent increase in the minimum wage is also due to come into effect in April.

BOE officials, who raised rates for the first time in more than a decade in November, are preparing to unveil their latest policy decision in London on Thursday. Markets had started to price in further tightening at the next meeting in May even before the positive upturn in wage growth, while a second hike this year is also seen as probable.

“In BOE speak, higher wages point to upside risks to domestically generated inflation and improving jobs numbers point to further erosion of slack,” said Scotiabank economist Alan Clarke. “In other words, this supports the case for a May rate hike.”

The collapse of the Pound in the aftermath of the Brexit vote in 2016 shielded the UK economy from what might otherwise have been a rather difficult period. However, the currency’s weakness made just about all imports more expensive. While the high street is just getting around to passing on higher import costs, the price of oil has is 50% higher today than it was in July 2016. That might not be taken into account by official figures but it’s something all consumers have to deal with on a daily basis. With the NHS scoring a substantial pay increase, we can expect teachers, police and regular civil servants to make similar claims and that is before the private sector starts demand pay rises. That all points towards inflation. 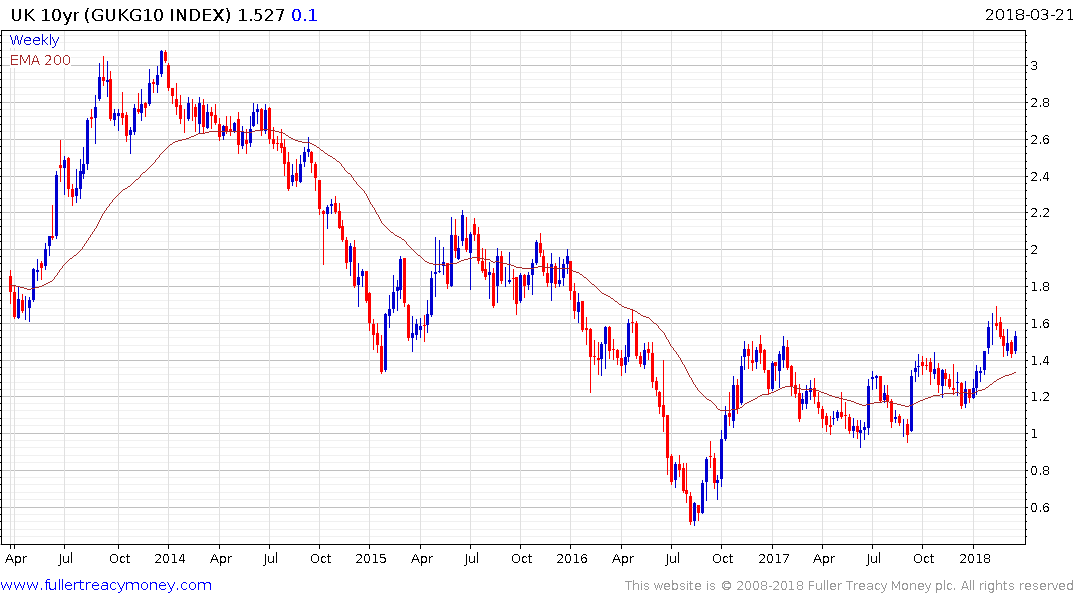 UK Gilt yields have first step above the base formation characteristics and a sustained move below 1.3% would be required to question medium-term scope for additional upside. 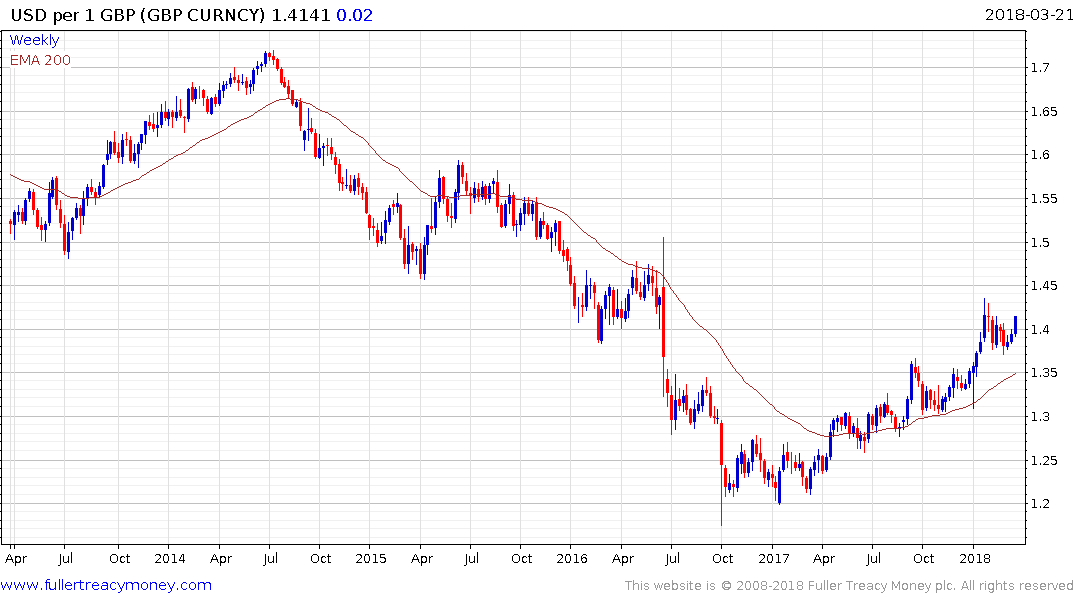 The Pound remains in a reasonably consistent uptrend against the US Dollar and is trading back above the psychological $1.40 area as of today. 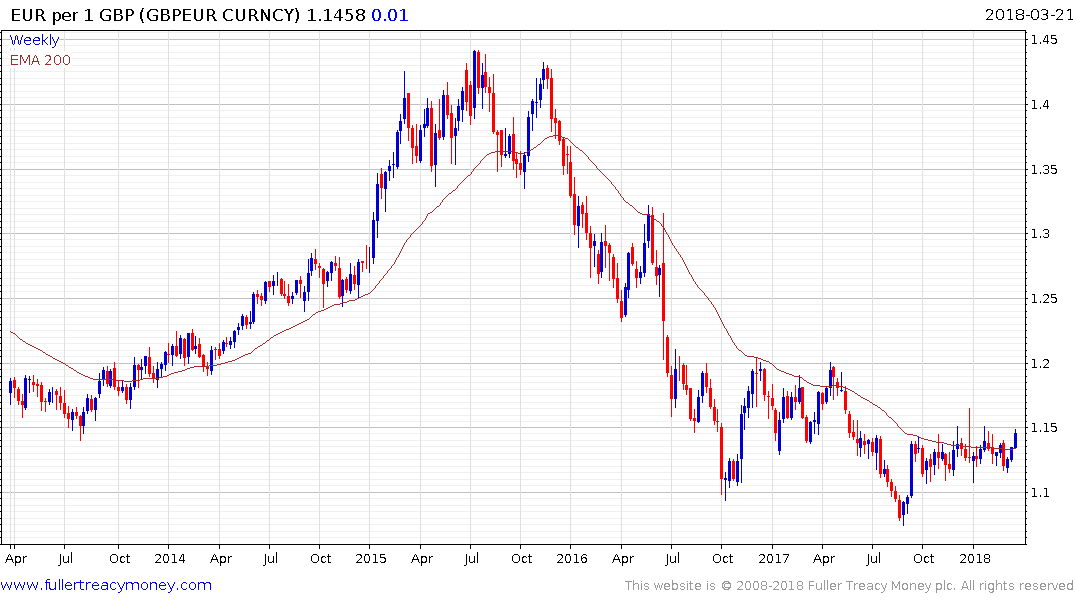 Against the Euro, the Pound has firmed to retest the upper side of its six-month range. Ranges are explosions waiting to happen and the odds are in favour of the Pound eventually sustain an successful upward break for the Pound.

This article by Leonid Bershivsky for Bloomberg piqued my interest today. Here is a section:

Cambridge Analytica's foreign campaigns present a similar picture. The case studies published on the firm's website discuss polling, voter behavior analysis and message crafting. One layer down, there are vicious negative campaigns and turnout suppression tactics such as organizing anti-election rallies in Nigeria in 2007. Deeper still, there's the entire arsenal of hybrid regimes that crave the outward trappings of democracy but feel the need to control it. Cambridge Analytica knows about that layer and, to an extent, relies on it to amass a successful portfolio. It doesn't, however, operate in that layer; like other consultants in similar situations, it gets paid to legitimize it with the outward appearance of Western-style adversarial campaigning.

When a group acts to topple overseas governments, they can be viewed as mercenary. When they do that at home they are termed traitors. The Brexit vote was tight at 52% in favour, so I think it is worth keeping close eye on how the issue of Cambridge Analytica’s role in swaying the referendum are treated by a parliamentary committee. On one hand their actions could be viewed as helping to get the word out, but on the other it could be viewed as a deliberate policy of disinformation.

If you cast your mind back to 2016 that is exactly what the Remain campaign was accusing the Leave campaign of. The Remain campaign is desperate to ensure the UK remains as close to the EU as possible and are likely looking at this development as a potential opportunity to push for a second referendum. Since the Pound rallies every time that looks likely this is a potential outcome, I believe investors should begin to give due consideration to such an outcome particularly if the Pound continues to hold above €1.14. 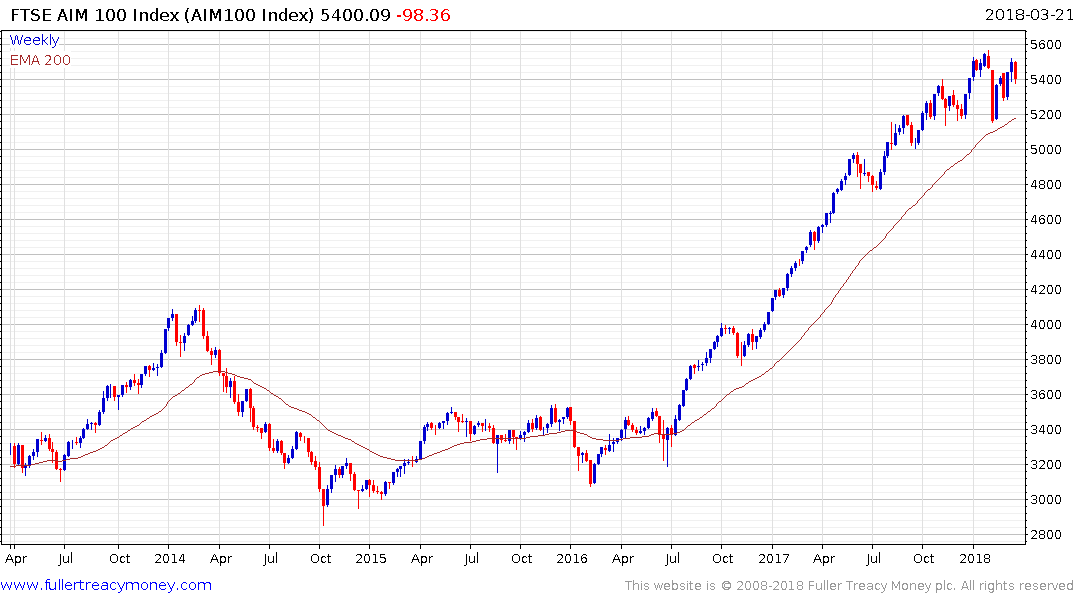 The AIM100 Index of small cap shares has been the best performing of the UK’s primary stock market indices but it lost momentum from late last year and may now be in the process of posting its first lower high. It needs to continue to find support above the trend mean if medium-term scope for continued upside is to be given the benefit of the doubt. 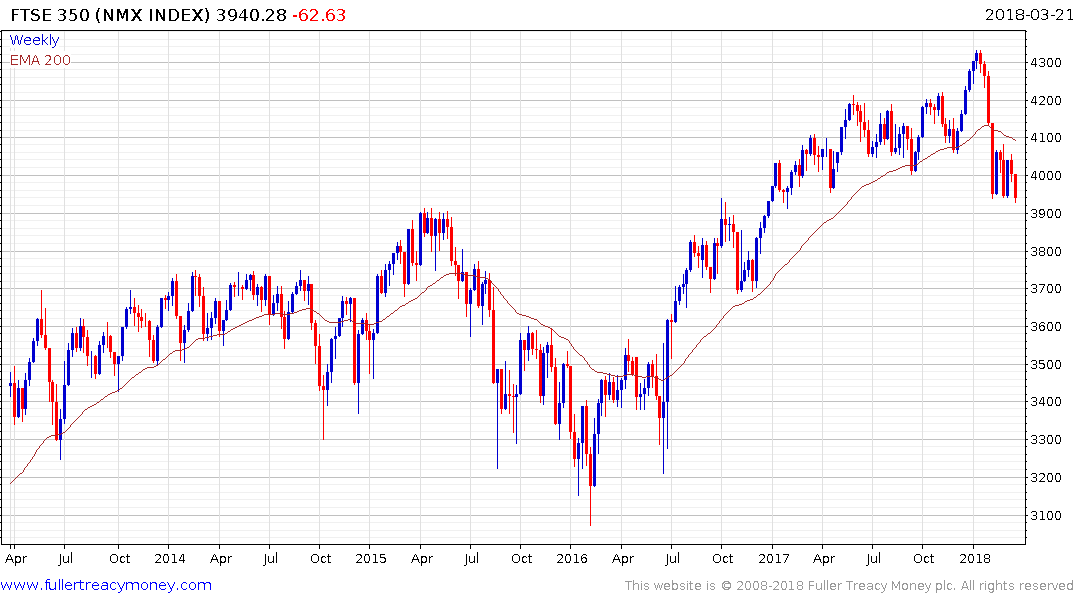 The FTSE-350 Index has broken the progression of lower rally highs evident since early 2016 and the trend mean has turned downwards. It needs to rally smartly from current levels to avoid medium-term top formation completion.