The U.K. central bank is trying to tame inflation that accelerated well beyond its forecasts over the summer, reaching 3.2% last month. Its new focus is enabled by stronger-than-expected jobs data that show unemployment will peak well below worst-case scenarios predicted at the onset of the pandemic.

While the BOE targets inflation of 2%, the rate may temporarily exceed double that level in the final three months of the year, slightly more than predicted in August, officials said. Spiking gas costs that have caused turmoil in U.K. energy markets “could represent a significant upside risk,” and also mean that consumer-price increases remain above 4% until the second quarter of 2022, the MPC added.

“The looming end of furlough is a major source of uncertainty facing the economy, but for now the bank appears relatively confident that the economy can deal with this shock without a large increase in unemployment,” according to Luke Bartholomew, economist at Aberdeen Standard Investments.

There has been a confluence of negative surprises that are affecting the UK economy at present. Some are related to pandemic supply chain issues, others are due to a lack of qualified drivers and others because the wind stopped blowing. (I can’t be the only one marvelling at how ridiculous that latter point sounds).

Even in the best of times these events would contribute to the perception that inflationary pressures are taking off. When twinned with the massive spending over the last year, the idea that inflation is transitory is looking less than credible.

Island nations generally have higher inflation than their continental neighbours because supply chains are less efficient when large bodies of water need to be transgressed. The post Brexit customs relationship has introduced an additional efficiency wrinkle which is now being priced in. 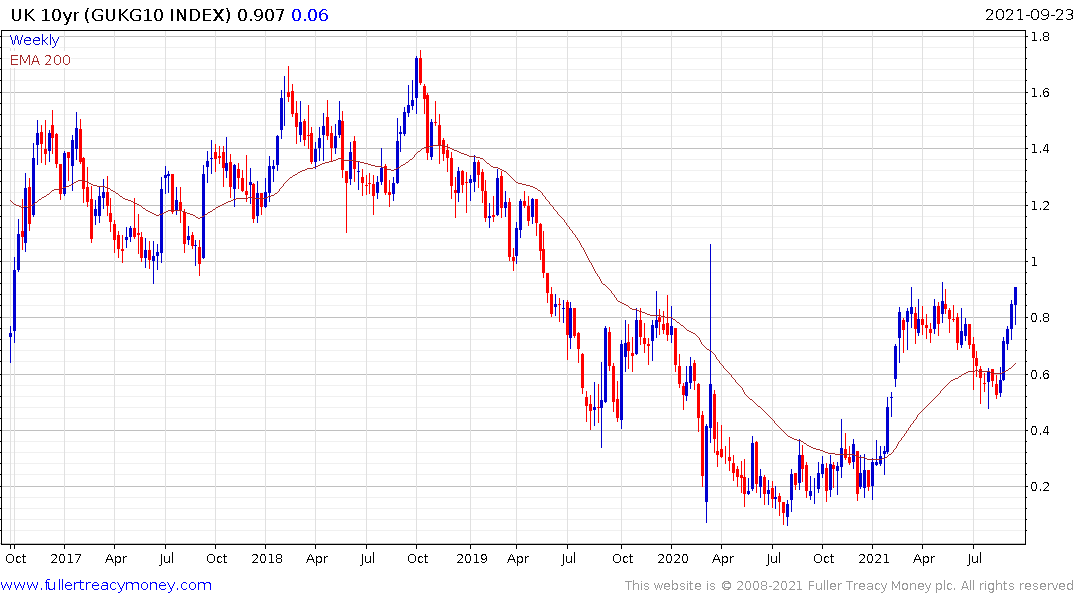 UK Gilt yields are back testing the 1% level and a sustained move below the trend mean would be required to question potential for additional upside. 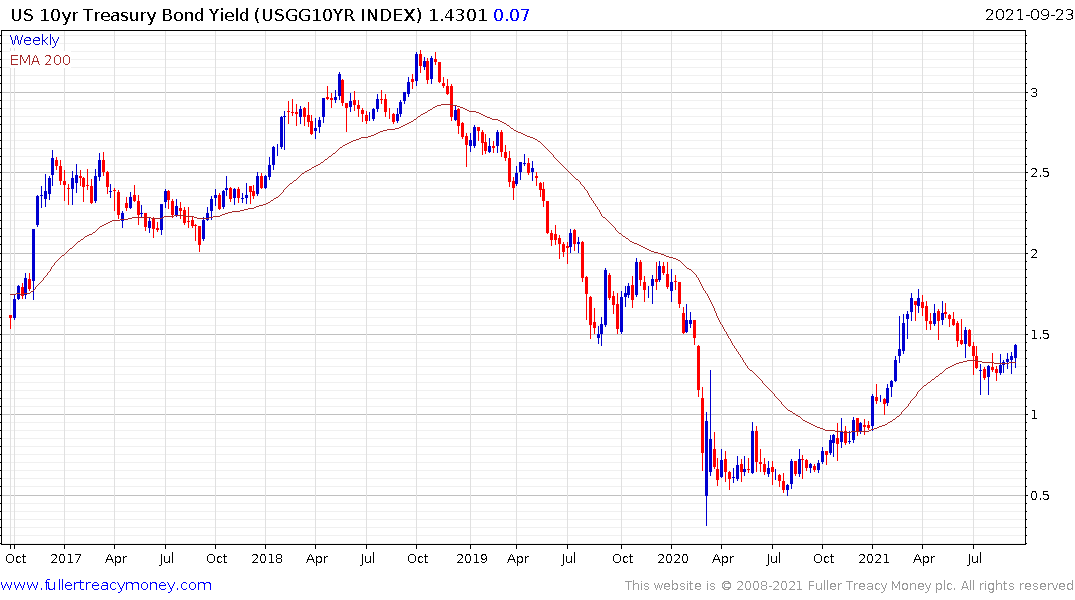 This is not only a UK story. There is strong commonality right across the global bond markets with sovereign yields breaking out in the USA, Europe and Switzerland too. The sustainability of debt burdens is likely to come back into focus before long because the higher yields go, the more pressing interest expense on rolled over debt becomes. 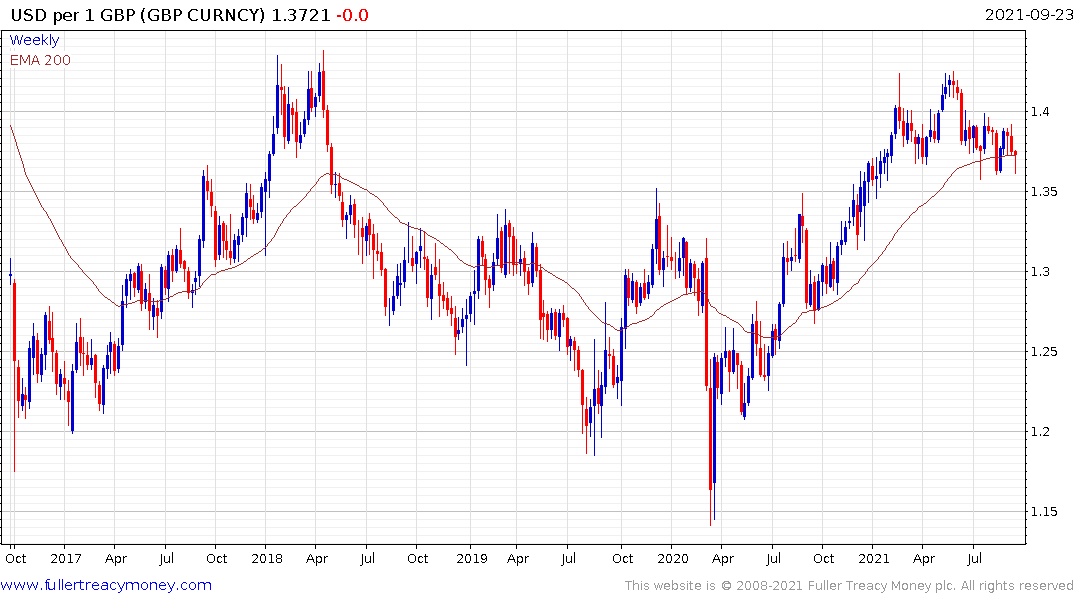 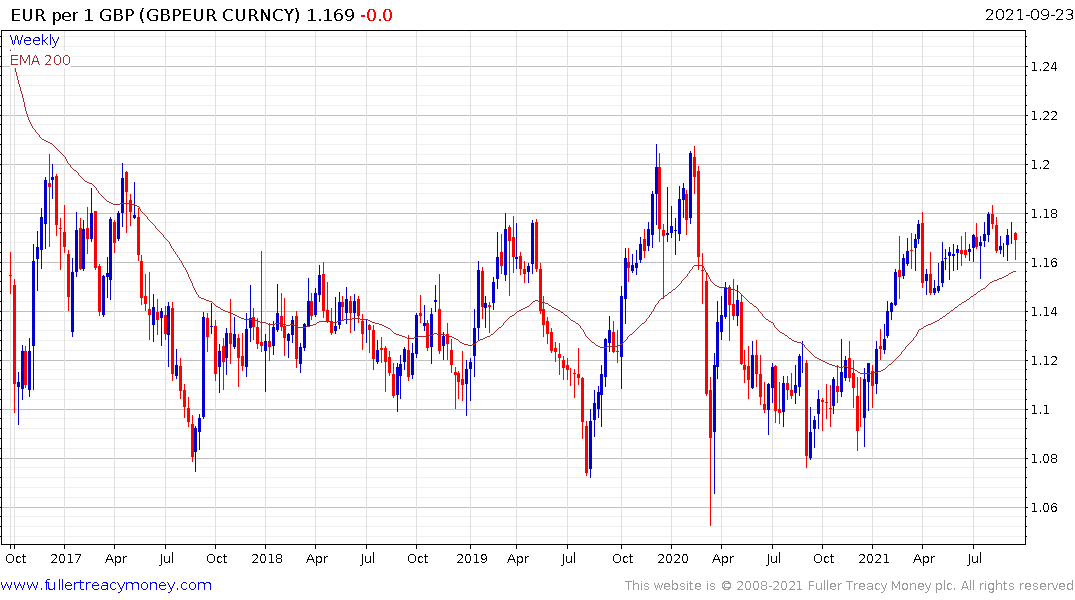 Meanwhile, the Pound has base formation characteristics relative to both the US Dollar and Euro. If the UK proceeds with an interest rate hike ahead of other developed countries that could be a significant catalyst for additional upside in the currency. Nevertheless, it’s very unlikely that central banks are going to be embark on rapid interest rates hikes because of the pressure that would put on asset prices. 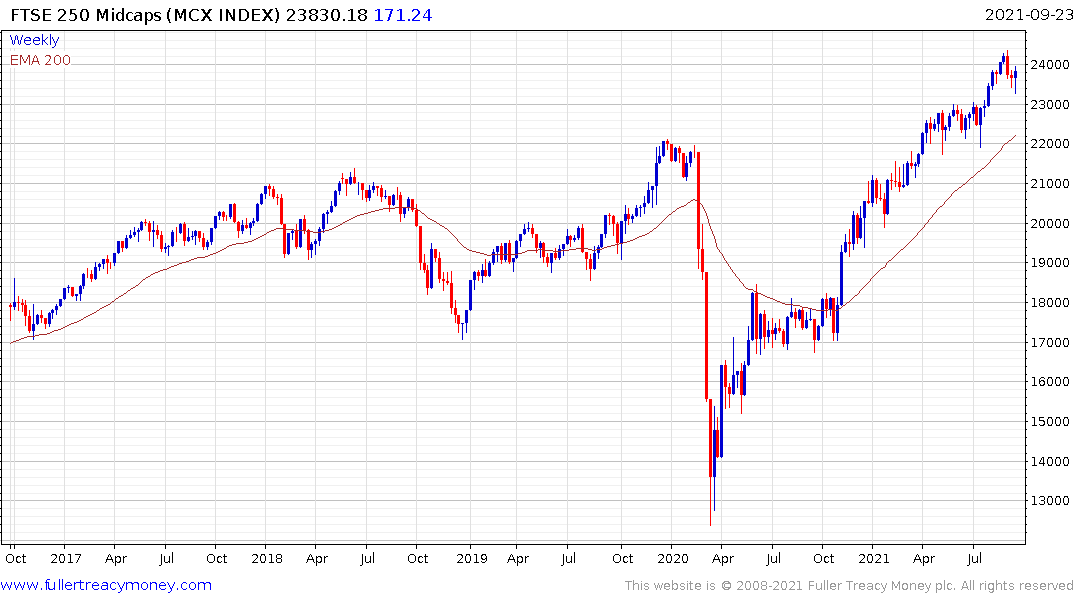 Even with talk of raising rates, the bond buying program remains intact which supports liquidity. The FTSE-250 remains in a reasonably consistent uptrend and bounced this week from the upper side of the most recent underlying range.