Monday’s news continues a trend of large-cap drugmakers snapping up smaller developers in an attempt to refill their depleted pipelines. Even before the Medicines Co. announcement, Basel, Switzerland-based Novartis had announced close to $16 billion of acquisitions since Vas Narasimhan took over as CEO in February 2018, according to data compiled by Bloomberg.

Jefferies’ Yee highlighted that the $9.7 billion price tag implied a higher multiple on potential peak sales of inclisiran than historically has been seen in other biotech deals. On a deal value to peak sales comparison, he said the valuation is similar to Bristol-Myers Squibb Co.’s acquisition of Celgene Corp., which closed last week.

Large pharmaceuticals companies have effectively outsourced research and development to the speculative biotechnology sector and are prepared to pay up for those that approach commercialisation.

The announcement this month the first human trials for a CRISPR fuelled drug and its early success statistics point to a quicker pace of innovation. That is putting pressure on the boards of large companies as the intellectual property tied to innovation is currently in a state of quick evolution with the result there are going to be some big winners if they can figure out the most effective business models.

The additional point is biotechnology is one of the few remaining truly cyclical parts of the technology sector. It is therefore likely to be a beneficiary of flows as a more risk-on attitude grips investors. 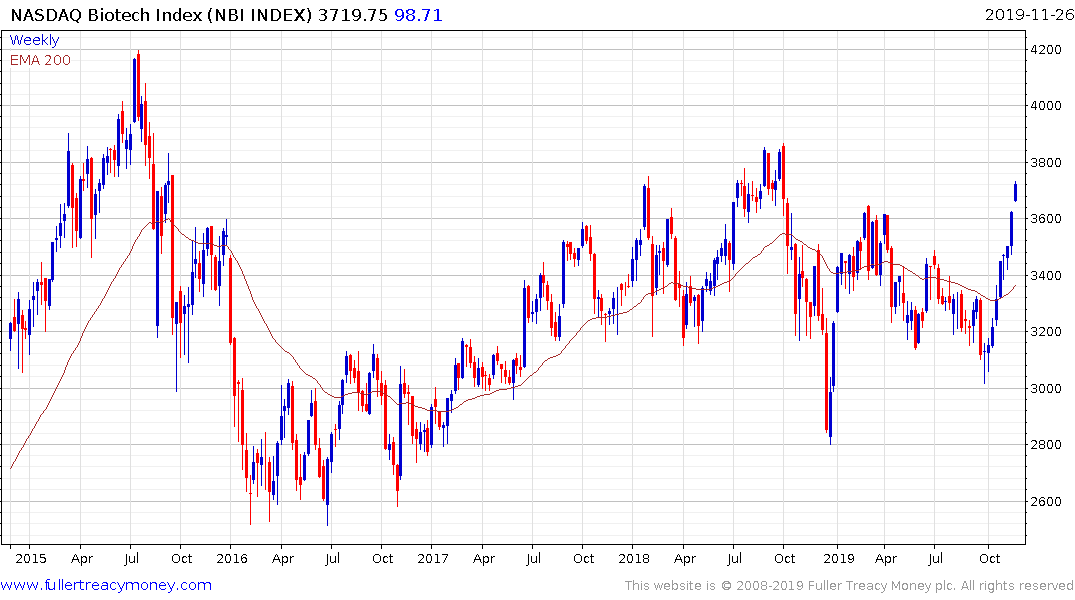 The Nasdaq Biotech Index has rallied on consecutive weeks to break a yearlong downtrend and is now swiftly approaching the 2018 peak. A short-term overbought condition is evident but a sustained move below the trend mean will be required to question near-term scope for additional upside.