Roosevelt, 1935: “We have established the principle of graduated taxation in respect to personal incomes, gifts, and estates. We should apply the same principle to corporations. Today the smallest corporation pays the same rate on its net profits as the corporation which is a thousand times its size.”

​Biden, April 2021 Speech to Joint Session of Congress: “Recent studies show that 55 of the nation’s biggest corporations paid zero in federal income tax last year. No federal taxes on more than $40 billion in profits. A lot of companies also evade taxes through tax havens from Switzerland to Bermuda to the Cayman Islands. And they benefit from tax loopholes and deductions that allow for offshoring jobs and shifting profits overseas. That’s not right. We’re going to reform corporate taxes so they pay their fair share and help pay for the public investments their businesses will benefit from.”

Treasury Report on Biden Tax Plan, 2021: “The President’s Made in America tax plan is guided by [six principles, including] requiring all corporations to pay their fair share. To ensure that large, profitable companies pay a baseline amount of taxes, the President’s plan would impose a minimum tax on firms with large discrepancies between income reported to shareholders and that reported to the IRS. It would also provide the IRS with resources to pursue large corporations who do not meet their tax obligations, reversing a trend toward fewer corporate audits.”

When there are thousands of people on the street and parliament buildings are under siege, politicians tend to wake up to the public mood. The harrowing experience, many elderly politicians experienced in the USA during the Capitol riot, is likely to inform their decision making going forward. That’s true regardless of whether they are aware of it or not. Giving the people what they want, which is more money, is going to be high on the list of priorities.

In France we see a lot of concern that the threat of coup because of disquiet at the trajectory of governance. In Germany, the governing CDU is likely to take a drubbing at the upcoming election. Japan’s Suga might not last a year as prime minister. It’s quirk of fate that the UK’s Conservatives find themselves in the position of the party of change and still hold a majority. Nevertheless, the government is under extraordinary pressure to deliver on a better outcome for people who have been left behind by the recovery from the financial crisis.

I know if I were a politician, I’d be worried. After imposing questionable lockdowns on the population, I would be under enormous pressure to deliver a big rebound for everyone to compensate them for the discomfort of confinement in 2020. Even after that I might still lose my job. That’s the norm following big dislocations.

They really don’t have a choice. They have to spend. The only question is how much and what will spending focus on. Taxes on the conspicuous wealth of billionaires makes for splashy headlines, but carbon taxes are probably where the majority of new income is going to be raised. That’s in addition to any additional levies imposed on corporations. We can also expect renewed commitment to a global minimum corporate tax, although that is a medium-term risk.

When we apply that rationale to the question of whether we will ultimately have inflation or deflation. It comes down to expectations. If governments are spending and also mandating that wages rise it inflates debt at least until outsized growth is achieved. If interest rates are held down to facilitate that move (financial repression) it contributes to inflationary pressures. That’s still the most likely scenario at present. That suggests stock market weakness is likely to be limited to unwinding of short-term overbought conditions. 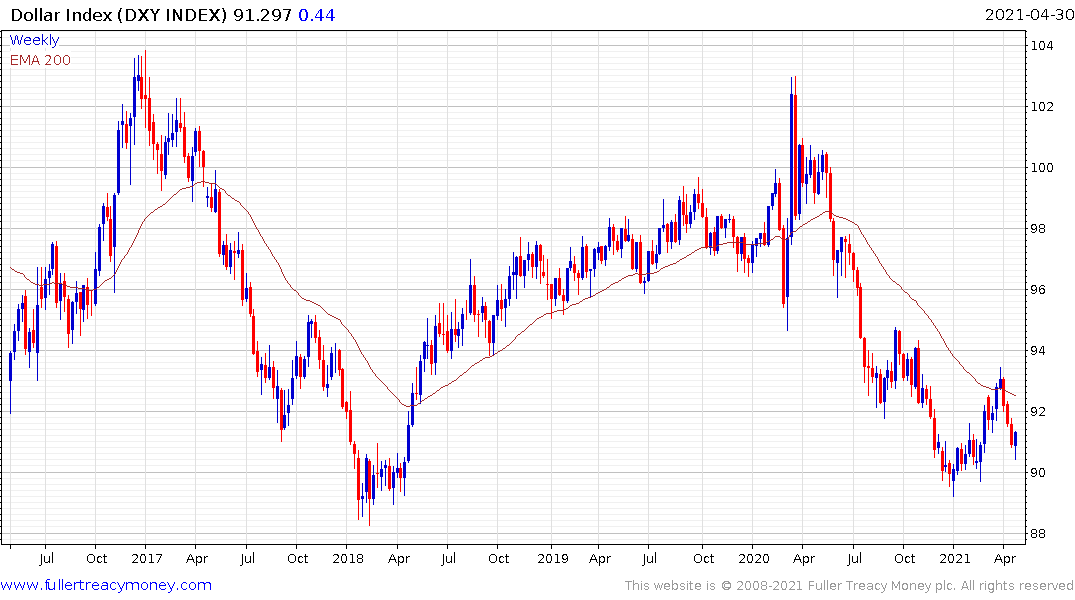 As some of these questions coming into sharper relief outside of the USA, the Dollar rebounded today with the Dollar Index continuing to hold support at the lower side of the medium-term range.