Besties? Why Alibaba, Tencent Are Teaming Up in $15 Billion Deal
Comment of the Day

Besties? Why Alibaba, Tencent Are Teaming Up in $15 Billion Deal by Eoin Treacy

An Alibaba-Tencent tie-up in local services would mirror the creation of Didi Kuaidi this year via a merger of competing taxi-hailing apps they separately backed. That marriage was intended to curtail an aggressive expansion by Uber and marked a rare cooperation between companies that still compete head-to-head in entertainment, e-commerce and finance.

As fundraising becomes more difficult in China, the current merger could provide advantages for both sides. It would let the Alibaba and Tencent-backed startups avoid competition with their closest rival, potentially saving money on subsidies and allowing them to collaborate on future efforts.
“The two companies merging would allow them to have absolute dominance of the group-buying market, and require less cash burn,” said Wang Weidong, an analyst at Internet consultancy IResearch in Beijing. “They will be putting a lot of pressure on competitors.”

China’s online businesses represent an interesting situation because they have evolved without the direct patronage of the Communist Party.  Of course they have to toe the line in terms of sustaining the political apparatus if they want to survive but that has not stopped them from developing into major private enterprises in a society that is among the most internet savvy in the world.

Capitalism tends to trend towards concentration and this is especially true of the online sector where the barriers to entry are defined by the ability to pay for placement and broad spectrum advertising. The proposed co-operation between Alibaba and Tencent is a reflection of this fact as well as their intent to hold onto dominant positions with their sectors. 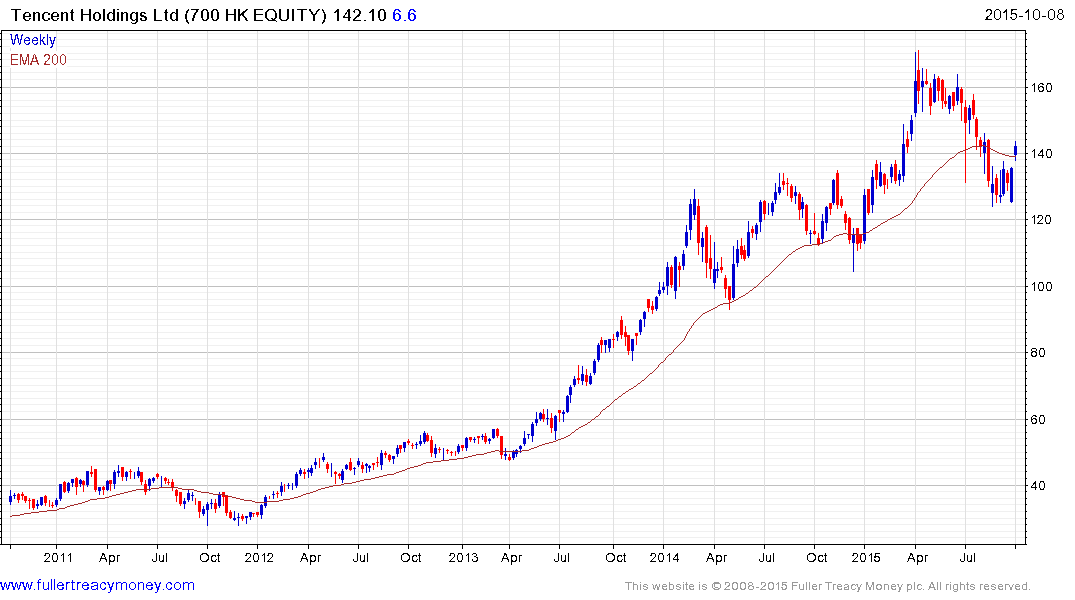 Tencent Holdings had become quite overextended at its April peak with the result that the pullback overshot. Nevertheless, the share found support in the region of HK$120 and a sustained move below that level would be required to question medium-term scope for continued upside. 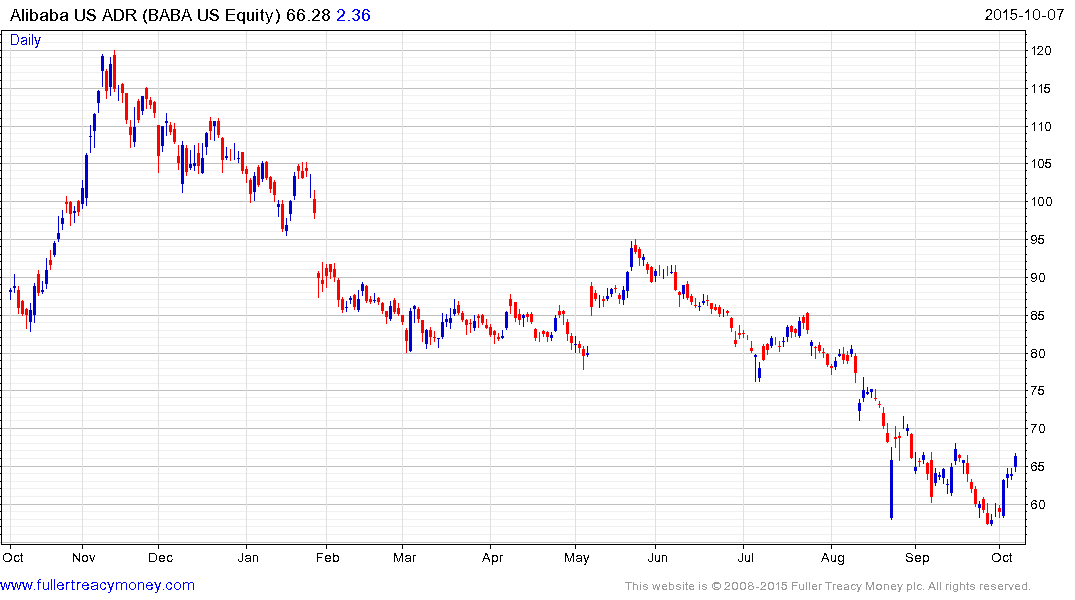 Alibaba has been trending lower since shortly after its IPO but steadied over the last month and rallied this week to challenge the yearlong progression of lower rally highs. 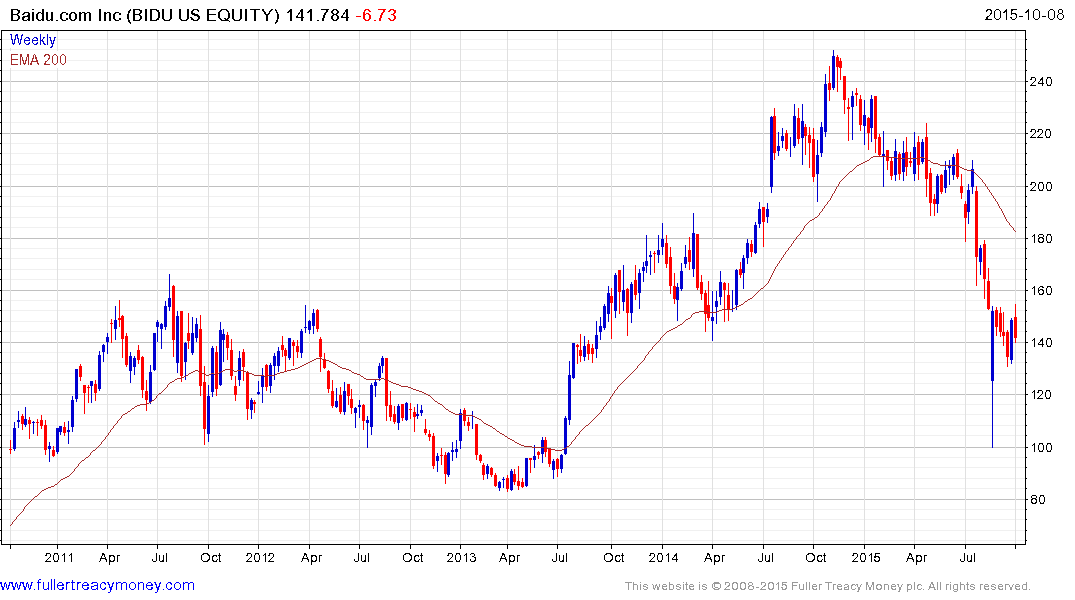 Baidu more than halved from its November 2014 peak but hit a climactic low in late August and potential for continued mean reversion can be given the benefit of the doubt provided it holds the $125 area. 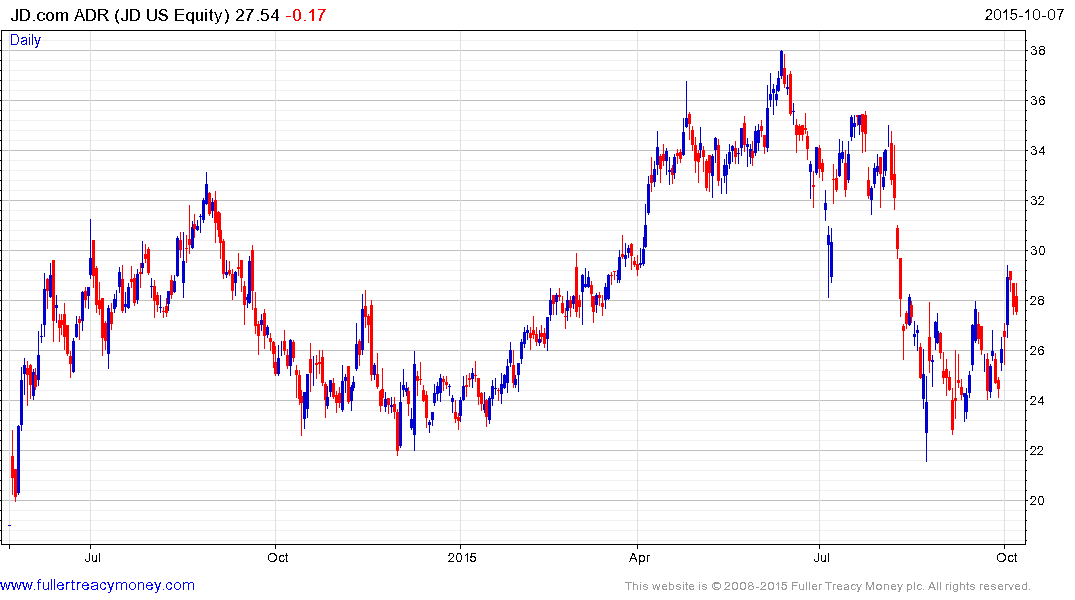 JD.com continues to firm from the region of $22.50 which has offered support previously. It will need to hold that level if potential for higher to lateral ranging is to be given the benefit of the doubt.