Technically, the polar vortex refers to a band of winds that encircle the Arctic and keep the cold locked far to the North. But with that temperature spike, known as sudden stratospheric warming, the band can buckle, allowing frigid air to head south. Gas traders used to call it the “polar pig.”

That could mean chills anywhere in the Northern Hemisphere, though this year it’s likely to end up in the U.S. according to Ryan Truchelut, president of Weather Tiger LCC. A wave of deep cold could give the Great Lakes and East Coast their first real blast of frigid winter weather, along with a storm pattern that delivers snow storms as well.

It will be a big shift for the U.S., where winter has been a bit lackluster so far. In New York, January readings have been 5.1 degrees above normal through Thursday, and Chicago has been 7.2 degrees warmer for the month.

Still, there’s no guarantee it will happen. While a sudden stratospheric warming usually leads to a burst of frigid weather, sometimes the clockwork of gears in the atmosphere doesn’t deliver.

“Many times in the past, the forecast for a cold weather event across the country resulted in a false alarm,” said Jim Rouiller, lead meteorologist with the Energy Weather Group LLC.

Weather is indeed fickle so no one can be sure that the expected wintry weather will in fact arrive. However, it is worth considering that the global economy is attempting to recover and delivery drivers are more a part of the fabric of the economy than ever before.

I ordered a new vacuum cleaner on Amazon on Boxing Day. It has still not arrived despite Prime 2-day shipping. The number of items lost or severely delayed over the holiday period has ballooned for Mrs. Treacy’s business. These kinds of delays represent significant costs for all online businesses. The time required to trace returns, handle customer complaints and keep track of the volume of returns is a significant burden.

A friend in the diamond business recounted the story of an associate who received a contract to supply Costco with diamond jewelry for the holiday period about a decade ago. On Christmas Eve he felt like a very wealthy man, almost all of the whole inventory had been sold. By the end of January, he was bankrupt. The volume of returns overwhelmed his margins and he could not shift the excess inventory.

2020 was the year of the ecommerce startup. Shopify, Etsy, eBay etc. have enabled legions of new sellers to begin trading. For many the challenge is to keep up with the service offering supplied by Amazon. Returns and the reliability of shipping are basic ingredients that need to be squared away before an ecommerce business is viable. That suggest first quarter earnings for online businesses will be important following the likely bump from strong trading in the fourth quarter. If new sellers can survive their first holiday season it will likely be a positive sign for the sector as a whole. 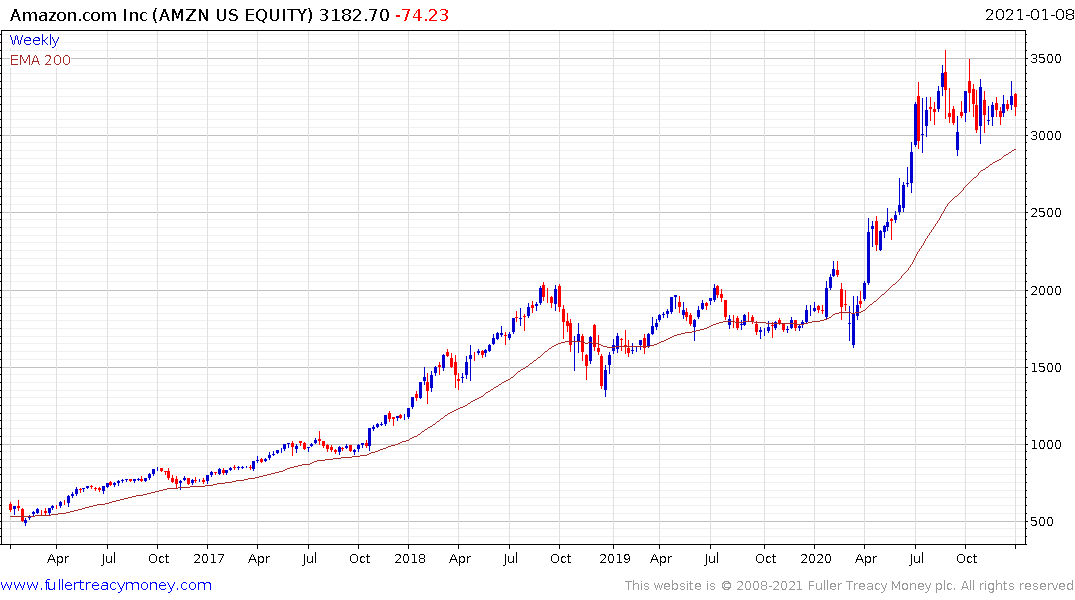 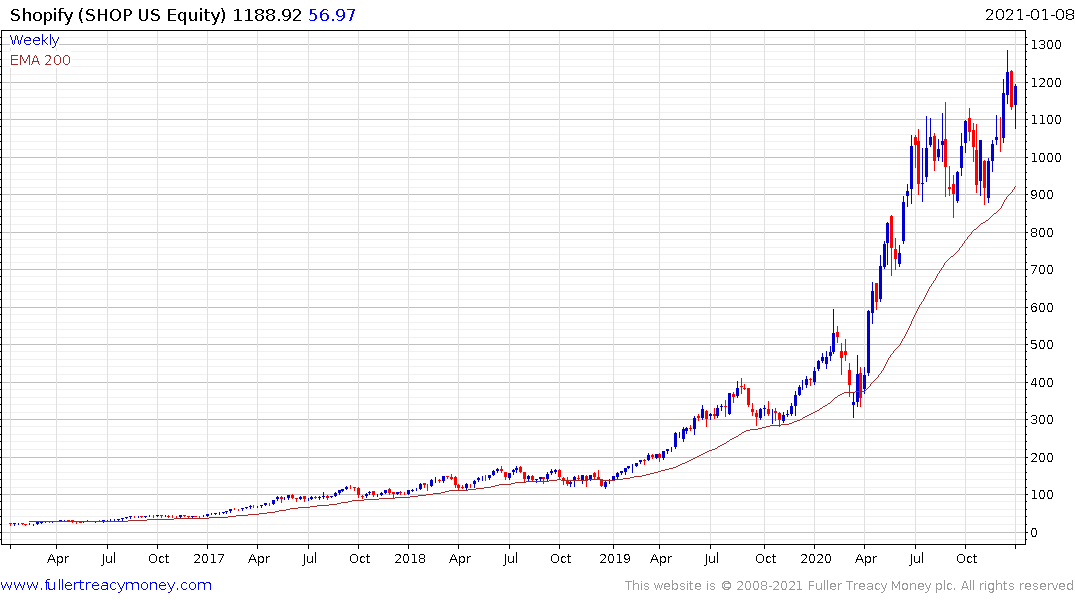 Shopify trades on an extraordinarily high valuation but the share has steadied from the region of the upper side of the five-month range. 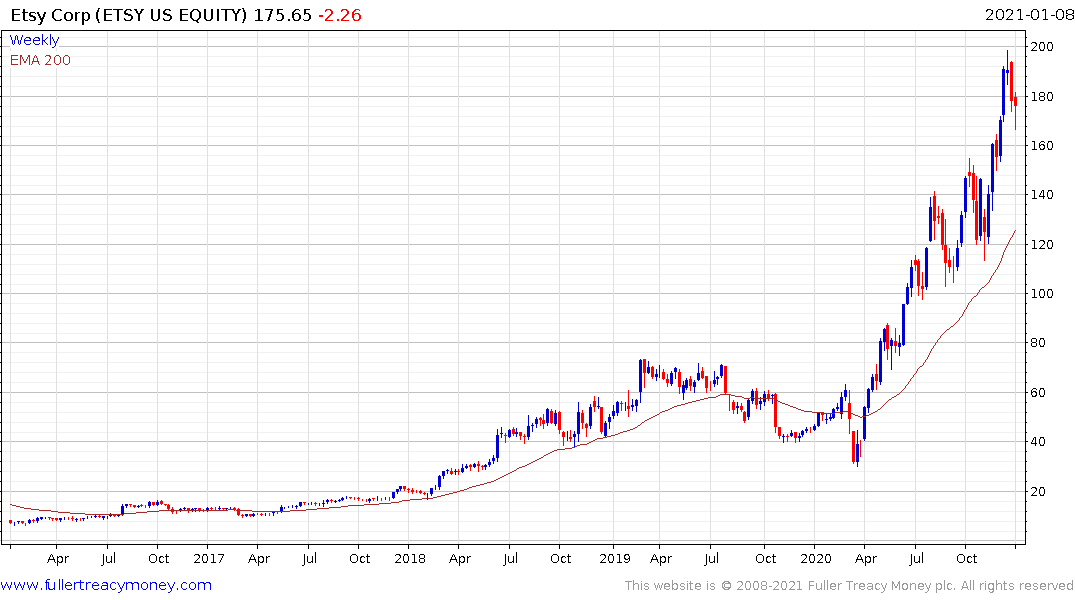 Etsy remains in a steep but consistent uptrend. 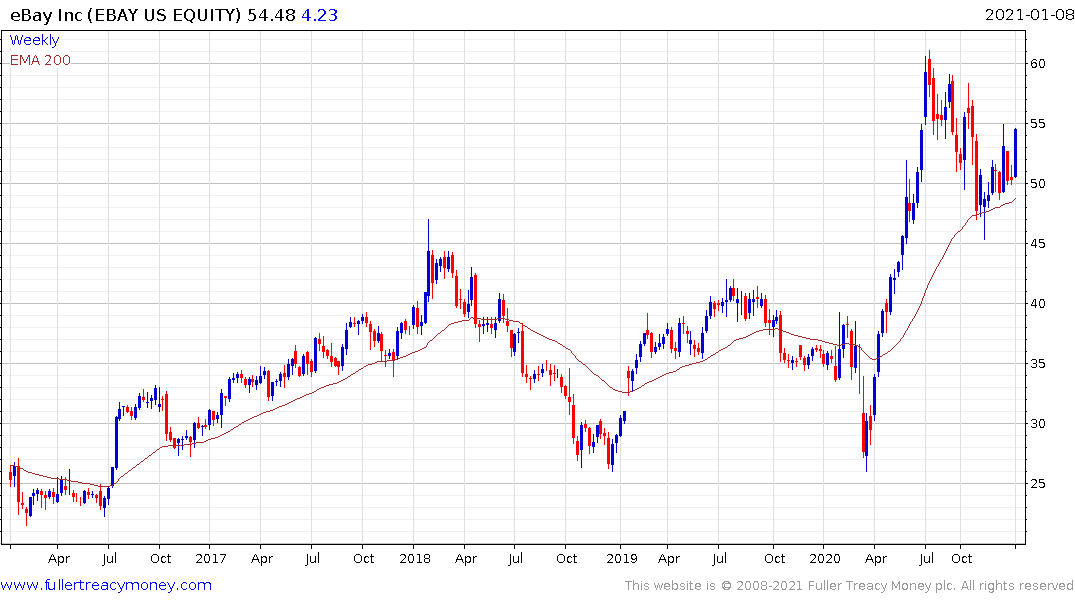 eBay is firming from the region of the trend mean.