Hedge funds are snapping up 10-year Treasury futures, and no other maturity, presenting a puzzle. The answer may lie in the collapse of a popular carry trade last year.

The highly-leveraged basis trade involved going long cash bonds and selling futures, to profit from the difference between the two, but came asunder in March 2020 when investors stampeded to buy the latter at the peak of coronavirus fears and upended the spread. Now the gap -- the so-called gross basis -- has reversed and favors shorting cash bonds and buying futures.

Of course, it’s not quite that simple. In futures markets, the counterparty who is short determines which specific cash bond traders have to deliver, adding another element of risk to the transaction. But with so-called ultra 10-year Treasury futures, there are only two bonds in the delivery pool, limiting that risk compared to other contracts.

That could be one reason why leveraged funds have built up net-long positions of almost 230,000 ultra 10-year futures, despite this year’s Treasury market slump, according to the latest data from the Commodity Futures Trading Commission. As for the original strategy -- there are no signs of it returning anytime soon.

While returns from this year’s trade are much lighter, a play based on 10-year ultra futures is most attractive, according to one trader who asked not to be identified as he isn’t authorized to speak publicly.

Cash Bond Pressure
A sense of how the cheapest-to-deliver 10-year Treasury bond has performed against futures can be seen in the implied repurchase rate for the note. It flipped from positive to negative in the first quarter, indicative of greater selling pressure on cash bonds than futures.

“With the sudden and significant rates selloff in late February, Treasuries came under pressure, underperforming futures quite noticeably,” wrote Morgan Stanley’s Kelcie Gerson in a note this week. “On an outright level, futures/cheapest-to-deliver bases reached the widest levels seen since last March/April.”

Across the rest of the Treasuries curve, hedge funds hold net short positions, though well below last year’s levels after the collapse of the original basis trade.

Market
A gauge of aggregate leveraged fund short futures positions -- which would likely be mirrored by long cash bonds in a basis trade -- has dropped by over $300 billion since last year’s February peak, according to calculations by Bloomberg.

Repositioning in the sovereign bond markets gathered pace today with a high degree of commonality across the sector. This above narrative highlights how quickly positions can be unwound when the trend changes and it represents a potent source of short covering activity.

The primary point about any big trend is buying the dip will always work as long as the bull market is active. Therefore, investors are preconditioned to look at medium-term points of weakness as buying opportunities. US bonds now enjoy a substantial yield premium over comparative international bonds and that represents a relative value argument. 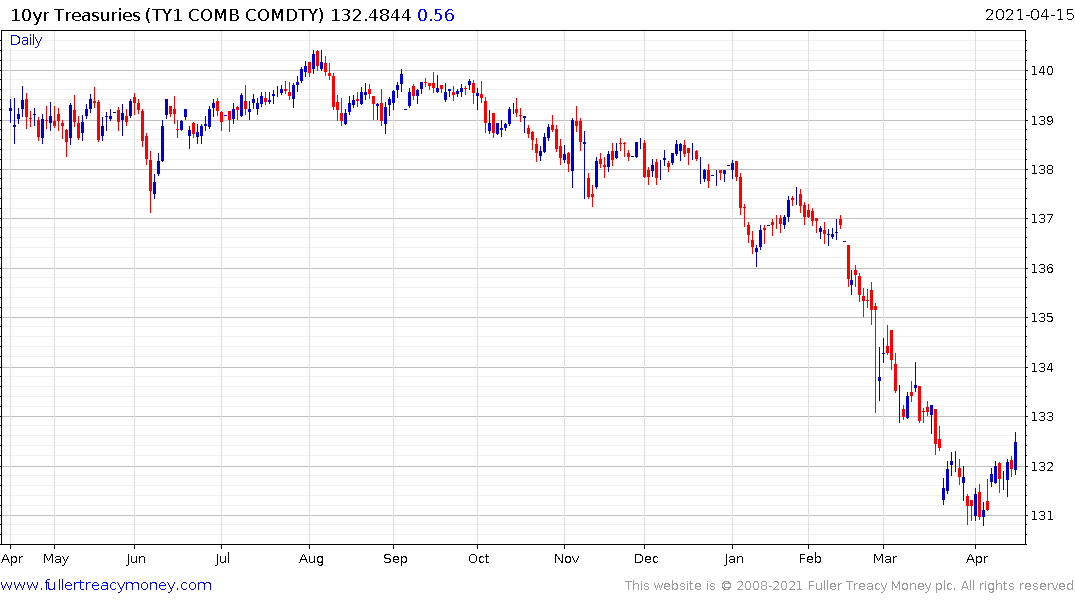 Treasury futures rallies today to break the seven-month sequence of lower rally highs. This chart has Type-2 bottoming characteristics with a loss of downward momentum and failed downside breaks. The confirmation of a Type-2 bottom is a massive reaction against the prevailing trend. In order for that to happen we will need to see additional waves of short covering and dip buying. I have now imposed a breakeven stop on my long futures trading position.

The Federal Reserve continues to say in plain English they have no intention of raising rates and will taper assistance long before they do so. That should give pause to anyone short of Treasuries.

The additional argument to consider is loan balances are declining at major banks. There is less demand for loans because consumers and corporations are paying down debt rather than taking out new debt. That’s very positive for the economy overall, but perhaps less so for banks in the short term. If banks are not lending, they need to park those excess reserves somewhere. That’s bullish for bonds and likely to result in lower yields.

The end of a bull market is characterised by the failure of buy-the-dip strategies. Therefore, to confirm a change of the secular trend the yield will need to find support in the region of the trend mean which is currently near 1%. 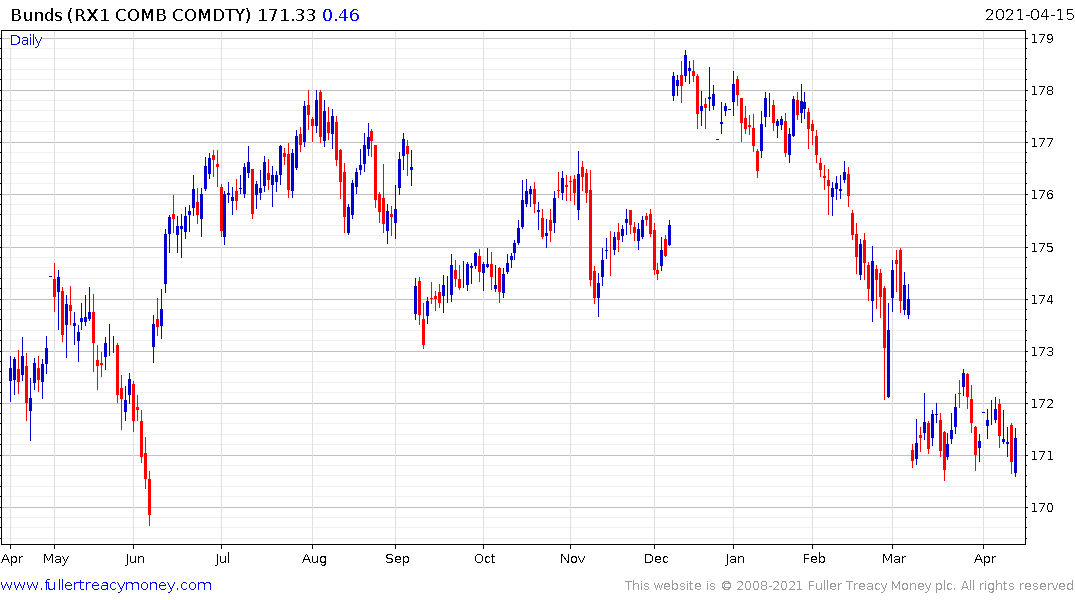 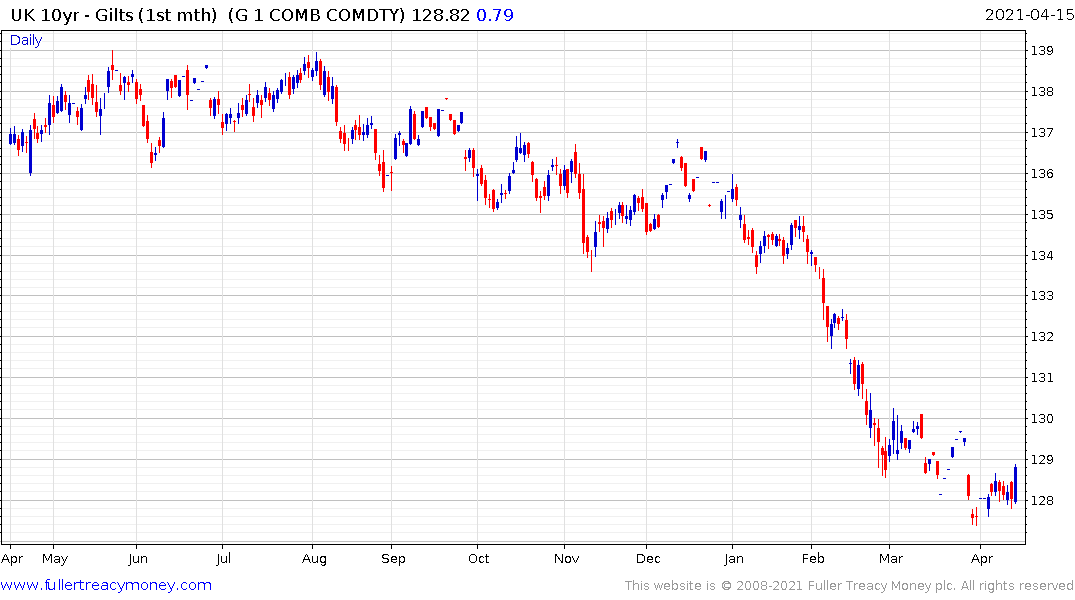 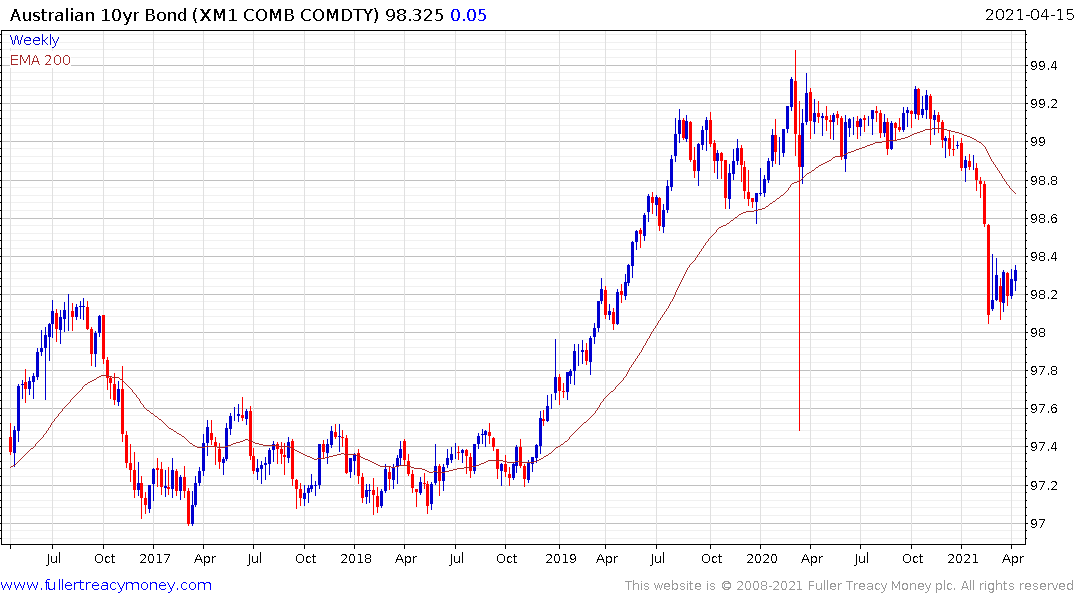 As Treasuries rally, it is creating demand for other government bonds too. German bunds rallied today to reverse yesterday’s downward dynamic. Gilts and Australian bond futures also rallied in a dynamic manner. 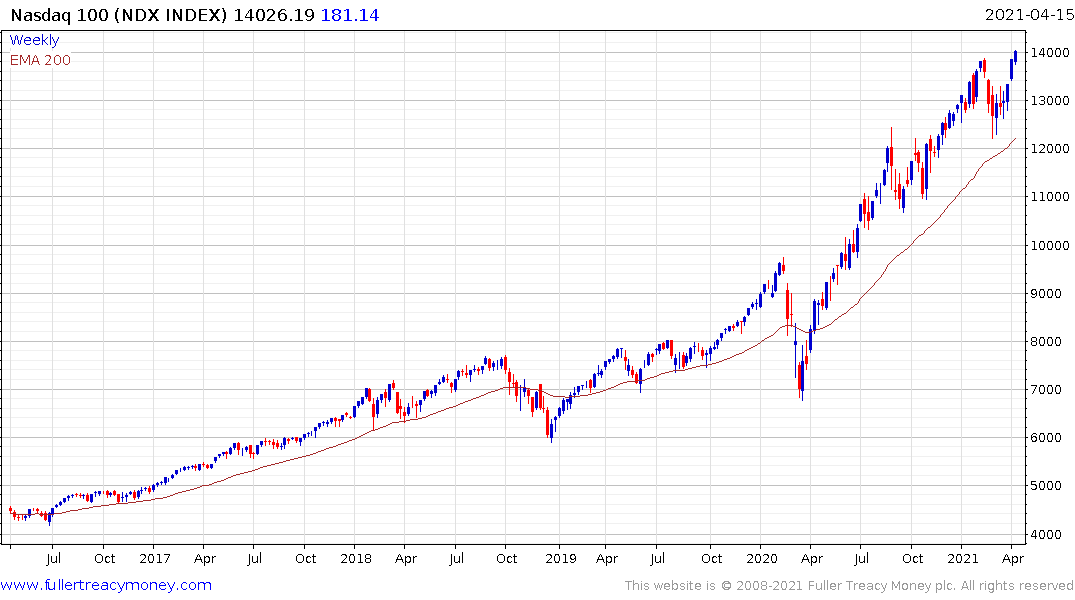 Rising yields represented a significant headwind for growth strategies so falling yields is a green light for further speculation. That’s behind the continued strength of stock markets even as short-term overbought conditions are extended. 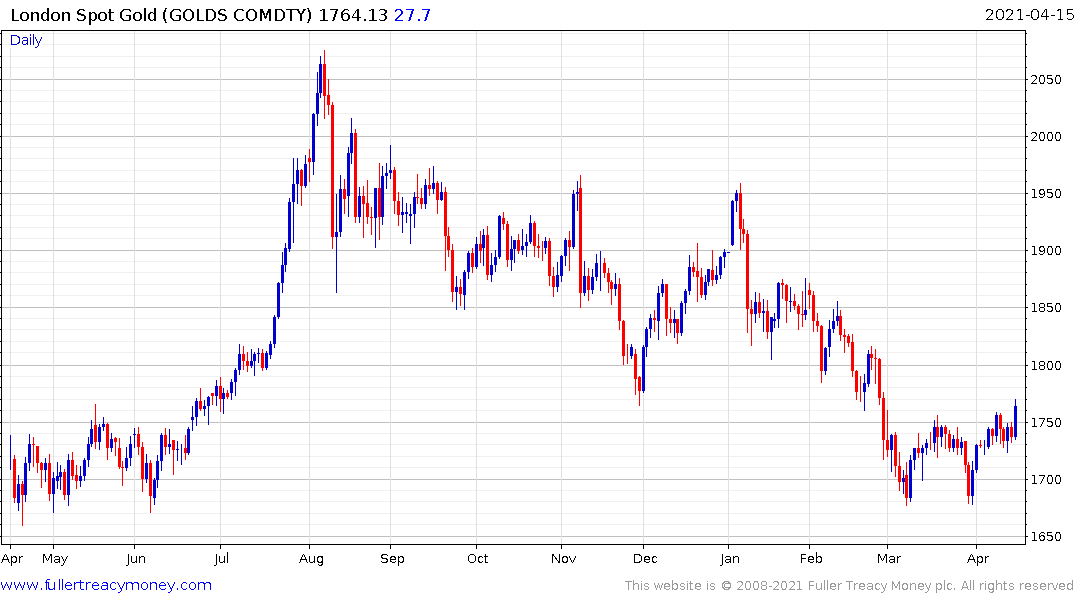 Gold peaked with Treasury futures and it is now rebounding in line with bonds. 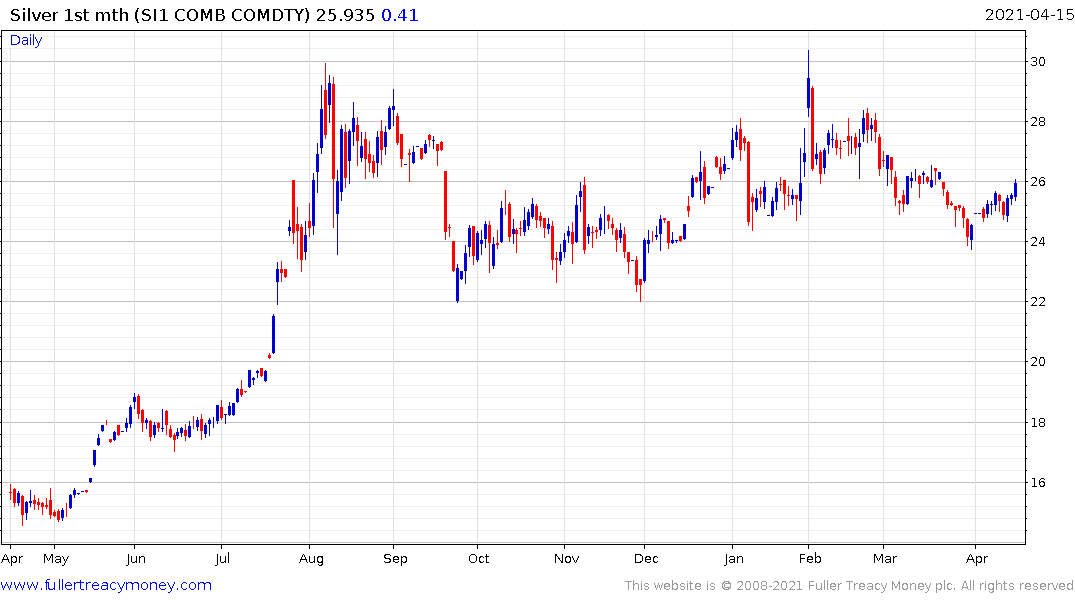 Silver is now bouncing from the region of the trend mean. 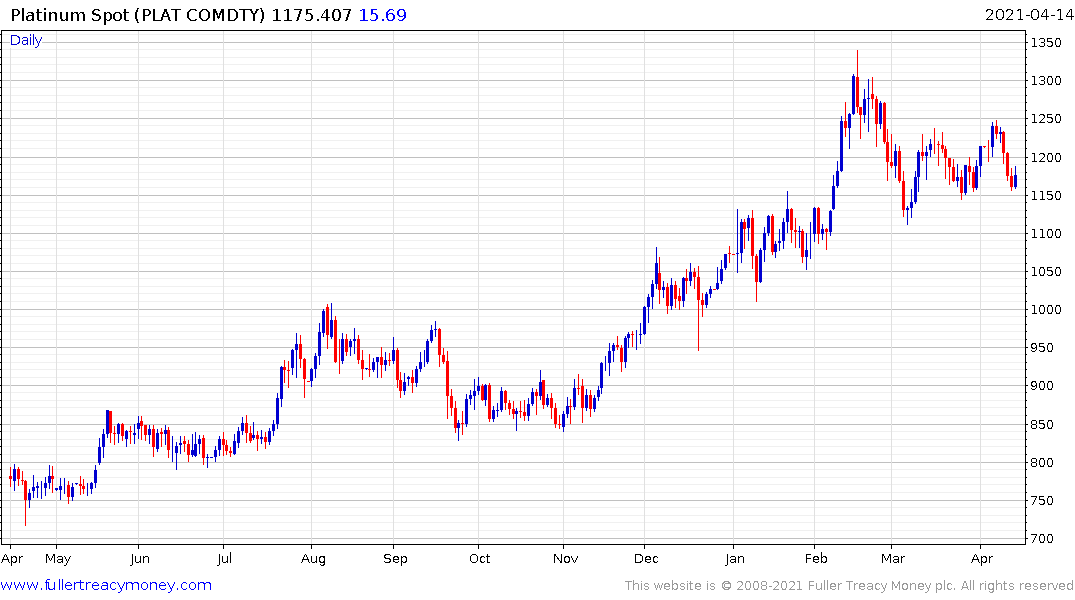 Platinum continues to firm as it holds the six-month sequence of higher reaction lows.