The new maximum production rate for Ghawar means that the Permian in the U.S., which pumped 4.1 million barrels a day last month according to government data, is already the largest oil production basin. The comparison isn’t exact -- the Saudi field is a conventional reservoir, while the Permian is an unconventional shale formation -- yet it shows the shifting balance of power in the market.

Ghawar is so important for Saudi Arabia because the field has "accounted for more than half of the total cumulative crude oil production in the kingdom," according to the bond prospectus. The country has been pumping since the discovery of the Dammam No. 7 well in 1938.

On top of Ghawar, which was found in 1948 by an American geologist, Saudi Arabia relies heavily on two other mega-fields: Khurais, which was discovered in 1957, and can pump 1.45 million barrels a day, and Safaniyah, found in 1951 and still today the world’s largest offshore oil field with capacity of 1.3 million. In total, Aramco operates 101 oilfields.

A lot of what Saudi Arabia is producing today is heavy oil and coupled with Venezuelan production that has boosted refining capacity for high sulphur blends. That transition is reflective of the changing production profile of the Saudi Arabia’s fields even as it continues to sustain the ability to produce up to 12 million barrels a day.

Much of what is being produced from shale properties is the equivalent of bonny light sweet but it is often mixed with the chemicals and mud used in the drilling process, as well as mixed with oil from other fields, so that the exported product is more difficult to refine. Here is a section from an article on Bloomberg covering the topic.

Throughout its transit from pipes to tanks and onto vessels, foreign compounds from other fuel or chemicals for cleaning tanks or stabilizing material can leach into the supply and foul up refining equipment. While crude passes through a similar chain in the Middle East too, the risk of impurities is lower because each oil variety typically has its own designated infrastructure.

In the case of American condensates, a type of ultra-light oil pumped in shale fields, cargoes can get pollutants such as “oxygenates, metals and cleaning agents,” said Sebastien Bariller, senior vice president at South Korea’s Hanwha Total Petrochemical Co. That’s causing uncertainty around U.S. oil quality, unlike purchases from the Middle East, where quality is stable, he said.

While optimism about clearing the supply bottleneck in Texas is improving the question about quality of the products being exported is probably going to take longer to figure out.

That is likely contributing to backwardation in oil prices at present. With a $5 difference between near and far prices there is little incentive to hedge future production and therefore less visibility on future cashflows. As a result, horizontal drilling activity has fallen modestly. 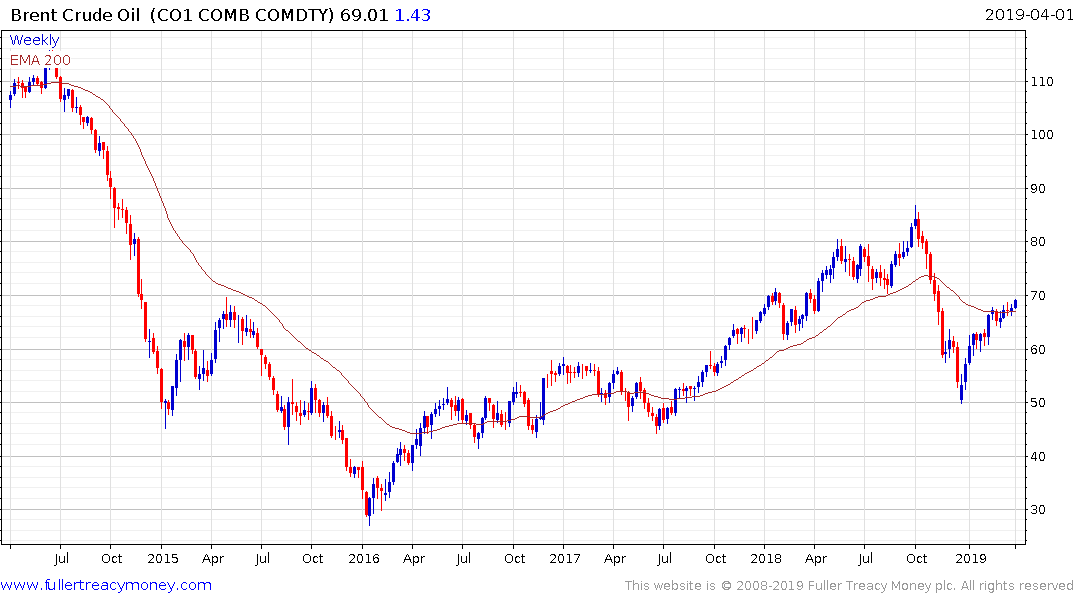 Brent Crude has not pulled back by more than $7 since January and a decline of more than that would be required to question current scope for continued higher to lateral ranging.